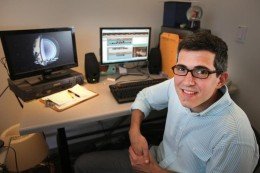 Only a few people can claim a role in news and entertainment programs as varied as “The Daily Show,” “Orange is the New Black,” “The Price is Right,” and the “CBS Evening News with Scott Pelley.”

But Tim Alves and his team do all that and more at WGBH in Brighton. Alves is a captions operations supervisor with the public broadcaster’s Media Access Group, leading a small team that spells out the dialogue and sounds of about 14,000 hours of television, movies, and online video each year.

“This is essentially live, high-pressure copy editing,” said Alves, who worked for a New Hampshire newspaper and a Los Angeles television station before joining the captions team in 2006. “You’re working on extremely tight deadlines, and that deadline is right now.”

Alves’s Boston staff and a national network of stenographers type thousands of words daily for networks, movie studios, and such online operations as Netflix. Their captions serve the roughly 38 million adults who have some trouble hearing and millions more who read them on televisions in airports and other noisy public places.

For live broadcasts, only a stenographer using a special keyboard can keep up with speakers. If necessary, WGBH can farm out the task to a network of on-call freelancers whose feeds are transmitted to Boston and synchronized with the broadcast.

“In the morning, I come in and I’ll do offline work,” Alves said. “We have scripts and video, and we’ll marry the script to video.” Later, he may switch to a program like “The Price Is Right,” which is beamed to WGBH at 11 a.m. — the same time it’s aired to many viewers.

Alves’s team has a broad portfolio. It captions Public Broadcasting System programs such as “Downton Abbey” and “Nova.” Other networks pay for the services of the WGBH stenographers, who write captions for such shows as “NCIS.”

The group also captions live events, including the Grammys. Every night, a stenographer plugs into a feed of CBS News to write live captions. A WGBH staffer will quickly “butler” the stenographer’s output, cleaning up any mistakes before the program is made available online.

“The technical term we use to describe those employees are steno-captioners. They’re extremely skilled, and they’re very focused,” said Alves. Often, he said, captioners will get into such a groove that they won’t remember what was said just seconds earlier.