In conjunction with UNESCO World Day for Audiovisual Heritage, WGBH and the Library of Congress are pleased to announce the launch of the American Archive of Public Broadcasting (AAPB) Online Reading Room. 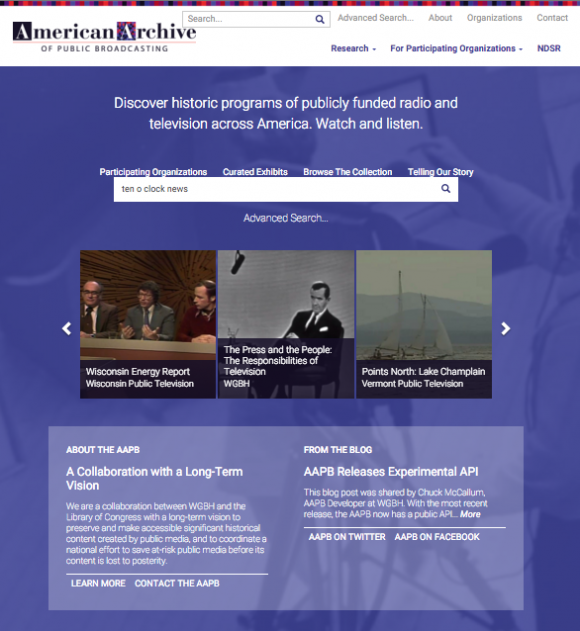 With contributions from more than 100 public media organizations across the country, programs that for decades have gathered dust on shelves are now available to stream on the AAPB website. This rich collection of programs dating from the 1940s to the 2010s will help tell the stories of local communities throughout the nation in the last half of the 20th century and first decade of the 21st.

Initially launched in April 2015 with 2.5 million inventory records, the AAPB website has added nearly 7,000 audiovisual streaming files of historical content from public media stations across the country.  The Library of Congress, WGBH Boston and the Corporation for Public Broadcasting have embarked on an unprecedented initiative to preserve historical public television and radio programs of the past 70 years. This extraordinary material includes national and local news and public affairs programs, local history productions that document the heritage of our varied regions and communities, and programs dealing with education, environmental issues, music, art, literature, dance, poetry, religion and even filmmaking on a local level. The project ensures that this valuable source of American social, cultural and political history and creativity will be saved and made accessible for current and future generations.

Nearly 40,000 hours comprising 68,000 digital files of historic public broadcasting content have been preserved. On the website, nearly 7,000 of these American public radio and television programs dating back to the 1940s are now accessible to the public. These audio and video materials, contributed by more than 100 public broadcasting organizations across the country, are an exciting new resource to uncover ways that common concerns over the past half century have played out on the local scene. Users are encouraged to check back often as AAPB staff continue to add more content to the website. The entire collection of 40,000 hours is available for research on location at WGBH and the Library of Congress.

“The collective archives of public media contain an unparalleled audio and video record of the second half of the 20th century and the beginning of the 21st,” said WGBH Vice Chairman Henry Becton. “These treasures of our times aren’t available elsewhere and it’s essential that we preserve them and make them available as widely as possible.”