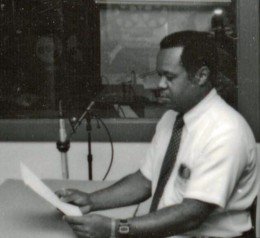 A popular student at the private boarding school, he started the first campus radio station and was elected president of the class of 1954. “He was sort of the center of our class,” said his classmate and longtime friend Joan Walther.

Back home in Hampton, Va., however, Mr. White lived under Jim Crow laws and segregated public schools. When friends from boarding school gave him a ride home for winter break, they had to plot their trip carefully as an integrated group riding through the South.

“Once they got past a certain area, they couldn’t stop,” Walther recalled. The students made sure they had plenty of gas and plenty of food in their big old car, a former hearse nicknamed “Mehitable,” a Hebrew variant word for “God rejoices.” 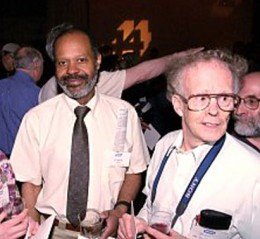 At the 2000 WGBH Reunion with John McKnight

Mr. White, who often credited his experience at the Cambridge School as the foundation for his confidence and multimedia skills, worked at WGBH on popular public TV shows including Julia Child’s “The French Chef” and spent 27 years at Harvard University, where he retired from the Media Production Center.

A former longtime Cambridge resident, Mr. White died Nov. 9 in Miriam Hospital in Providence following a heart attack. He was 80 and lived in Providence….

Mr. White was in the studio audience for a WGBH show called “Folk Music USA” when he inquired about volunteer opportunities at the station and wound up with a new career. “I walked up to someone I knew who worked there, explained my background in television, and asked if they took volunteers,” he told Harvard Community Resource. “It was one of those ‘and the rest is history’ kind of jobs.”

He worked for WGBH for 15 years, holding various positions in production for shows including “Crockett’s Victory Garden,” “Say Brother,” and “The 10 O’Clock News.” 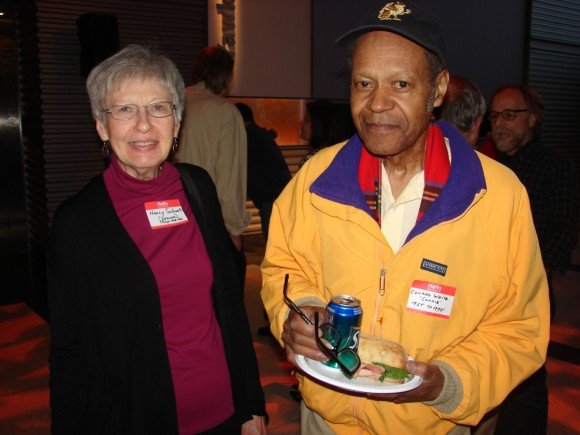 At the 2015 WGBH Reunion, with Nancy Schuetz

After “The French Chef” ended, Mr. White gave a piece of Julia Child’s cutting board to his longtime friend Lou Greenstein, a culinary consultant and chef who appeared on the Boston television show “Good Day” for many years.

Mr. White and Greenstein first became acquainted as young men on the docks at Community Boating in Boston, where Mr. White was a longtime member.

“He was wonderful with people. He was a gentleman, as everybody should be a gentleman,” Greenstein said. He recalled that Mr. White was a favorite guest at the Greenstein family’s Thanksgiving table for several decades. Mr. White always brought deviled eggs to the party.

Sailing was one of Mr. White’s passions. He enjoyed skippering and sailing on what are known as Shields class boats in Newport, R.I., which he initially visited for the folk and jazz festivals…