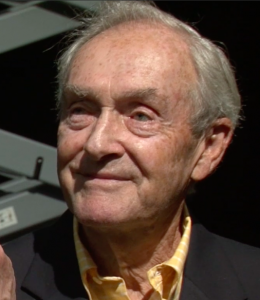 “OK RCA, if you build a stereo television transmitter and TV sets, we will prove to you that you need to.”

I can take no credit for this. Credit goes to Hartford Gunn, the visionary in whose shadow many of us have built our careers.

He believed, and I concurred, that, back in the late 1960’s, the absence of stereo sound for television was not a feature WGBH management, staff, listeners, or viewers would wish to endure for a very long time. Indeed, WGBH-FM was already attracting listeners who cared about the quality of sound. Why just radio? Why not television?

“Why not” became a buzzphrase that Hartford passed on to me … and I have embraced it ever since.

Back then, all TV sets had mono sound.

TV set makers and transmitter manufacturers pointed fingers at each other. If the transmitters only delivered mono sound, why build TV sets that could deliver stereo … and vice versa?

So, Hartford, with me in tow, went to Hollywood to observe and learn — in a few days — how the recording of stereo was being accomplished in the film and LP recording businesses. (I did my thesis research on AMPEX — another story of how the video recorder came into being)

When we returned to Boston, I reorganized part of our engineering department to create a sound department. Bill Busick, engineering leader for WGBH FM was a reluctant player in this new undefined pursuit to establish WGBH as the leader in sound production for any media. Tom Keller was the EIC (Engineer-in-Charge) and welcomed the challenge.

Why wait to follow? Get out and forge new ground. That was WGBH. That is WGBH. We had two TV stations, a film department, and a radio station. Where would this pursuit of stereo sound for television take us? We didn’t know. We had bright people on staff, and Boston was rich with talented new companies that were focused on sound. KLH was founded by Henry Kloss in the late 1950’s. He came in to help. As did others.

There were various processes to put sound on film products. And key producers of video programs would often come to Ann Arbor to edit sound and pictures. So, I had some background in putting sound with pictures for television distribution. But I was not the engineer/tech guru. That was Howard Town. He and I were the two VPs of NET, based in New York, that oversaw the Ann Arbor based duplication and distribution center. (On any given day we had 10,000 program units bicycling through the system)

Shortly after I left to join WGBH, my old buddy and colleague Howard Town left NET for AMPEX. (Back then, an AMPEX quarter inch tape recorder was the best there was.) Howard’s assignment was to develop a 24-track audio recorder using two-inch tape. All the “mechanics” for the VCR were in place. Why not use the concept for audio — where multiple tracks could be edited down to mono, stereo and four-track composites for the recording industry?

Naturally, Tom Keller, WGBH chief engineer, Howard Town, and myself (and Bill Busick, I think) started a conversation about syncing the AMPEX device (finally, I believe, named an MM1000) with a two-inch VCR. That took us to New York to talk to the folks who used the Selsyn Interlock system for syncing sound and pictures for motion pictures. Was there something we could learn?

While the technology development was underway, the creation of program material — and ultimate delivery of same — was front and center. The Boston Pops quickly became the lead contender for the experiment.

With all of “players” working as a team, we reached out to England to purchase a Neve audio board. We bought a truck to house it as a mobile sound recording facility. And we arranged with Howard Town at AMPEX to acquire an early MM1000. Serial number two, I believe, and that, too, went into the truck with the Neve board.

Someone, probably Bill Cosel and Hartford, worked with the Pops, Fiedler, the union and stage hands, et. al., to allow us to put cameras and lights and staging on the stage of the Pops. I remember Fran Mahard creating flats that would help us with the sound and the pictures. Back then, the lights were bright and hot. We needed the musicians to wear blue tucks instead of black, and we had to dig up the street in front of Symphony Hall to put in special transformers to handle the power we needed for lighting.

Yes, we had our big mobile television truck already in hand. Think Tennis.

A genius gentleman — Bill Pierce — produced the mix. We saved a track for mono TV, two tracks for stereo, a rehearsal track or two, and the rest of the 24 tracks were dedicated to the various sections of the orchestra. I’m sure Bill Cosel has a lot of memory and details to fill in.

After a concert by the Pops, the video came back separately (with a mono track) and the sound came back to WGBH in the sound truck. In post production, even a single note could be corrected — and was. The sound was edited to perfection. Then the video was edited to match. Now, remember, back then, editing video was done with a razor blade and a very expensive “splicer” where the cut two-inch tape was joined with aluminum adhesive tape. And the splice mark pulse was revealed by applying stainless steel “dust” in an alcohol base to the tape. (That’s another story!)

With some trial and error, we learned that we could place the video tape on machine A and the take up reel on machine B — some 20 feet or so to the right — in order to get the MM1000 and the VCR in sync. I don’t remember what it was we developed to sync the VCR and MM1000. It was a “black box.”

The broadcast, finally, was mono to channel 2 and stereo to WGBH FM. Viewers were taught to put their stereo speakers on each side of their TV set, turn off the TV sound and turn up their stereo FM amps. And the press in Boston was encouraged to watch and listen. They did … and they liked it. The new clippings were then delivered to RCA — who made both TV sets and transmitters. They “got it.” And, you know the rest of the story.

Hartford Gunn was the one who dreamed about what isn’t happening — and could or should be — and then made it happen. And that took a team of folks who had no experience of failure. Indeed, all we had was the thrill of inventing a then better “tomorrow” in the evolution of our chosen career of television.

Among the manny lessons taught to me by Hartford — from almost my first day at WGBH — was a critically important message on leadership. The first principle was, without reservation, to have no interest in WGBH being a follower or a second place player. Then, secure the most advanced technology the world has to offer, let the world know you have it, and the most talented will beat down your door to gain access to it. Hire the most creative who come forth, give them objectives and goals to be met, give them the necessary financial resources, give them encouragement and mentoring, — and get the hell out of the way!

Why is WGBH what it is today? Look around WGBH, then and now, and consider pioneering stories like this one. That’s why.

Do you have other memories of stereo television at WGBH? If so, send them to or post below.