In words, music, songs, prayers and above all, glorious smiles, the family and friends of legendary tennis journalist Bud Collins gathered inside Trinity Church at Copley Square Friday afternoon for a two-hour memorial service to celebrate his life. 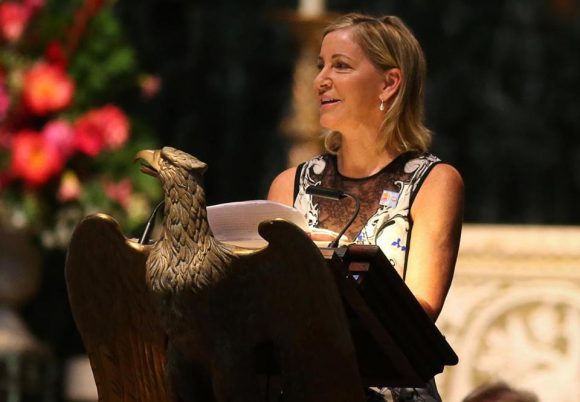 Much like Collins, who died in March at age 86, the ceremony was witty and smart and touching, as elegant and flawless as Wimbledon’s emerald lawn. Some of the biggest names in the game — Rod Laver, Stan Smith, Billie Jean King, Chris Evert and others — came from far and wide to speak fondly of a man who was their loyal friend, their trusted confidant, and the singular authority of the sport he so dearly loved.

They shared stories of Collins’s clever turns of phrase, his trademark crazy wardrobe, his passion for everything about the game and everyone who played it.

“Bud will be remembered most of all for his wonderful, unique sense of humor,’’ noted Evert, one of five speakers to offer remembrances during the ceremony. “But what I admired about him, more than anything, was his extraordinary kindness, his decency and his sensitivity.

“Bud was one of the finest and tennis will never be the same. He will be the lasting imprint on our sport, and on our souls.’’

King, long ago dubbed “Mother Freedom’’ by the moniker-loving Collins, wore a shocking pink jacket to the ceremony. Because pink was “Bud’s favorite color,’’ she said, and this was a day, what would have been his 87th birthday, to give him everything he wanted.

King, whose courage boosted the women’s game to new heights in the 1970s, particularly when she thumped loudmouth huckster Bobby Riggs in a ballyhooed matchup, regaled the gathering of some 2,000 with stories dating to the first time she met Collins more than a half-century ago….

Both Evert and King noted how they trusted Collins.

“He was trustworthy and compassionate,’’ said Evert, noting how she was comforted by Collins immediately after losses in seven Wimbledon finals. “I knew at that moment Bud Collins would take care of me.’’

“I just loved him from that moment,’’ said King, thinking back to the first day she met Collins. “I felt safe.’’…

The choirs of Trinity Church accompanied a handful of soloists, including singers and instrumentalists, helping to make the celebration a dynamic presentation. The man who wrote about triumph and loss, legends and hackers, was sent off with rich readings (“To everything there is a season . . . ’’) and magnificent song (“Amazing Grace’’; “Ave Maria’’)….

Following the ceremony, many in the gathering made their way slightly west for a reception at Boston University, where many of Collins’s works have been preserved at the Howard Gottlieb Memorial Gallery. Collins earned his undergraduate degree at Baldwin Wallace College in Ohio, then moved to Boston in the late 1950s to pursue a master’s degree in communication at BU. He quickly caught the news bug.