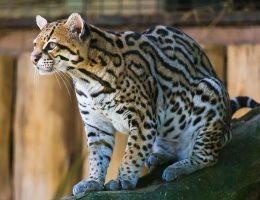 As preparations were underway for the first WGBH auction, the planners received an extraordinary offer from a pet dealer in the Boston area.

This gentleman was in the business of importing ocelots from South America, and selling them as pets.  (An ocelot is a stunningly beautiful wild cat, about twice the size of a domestic tabby.)  The dealer offered to donate an ocelot kitten to the auction.

Everyone was delighted.  The PR people did lots of publicity around the live ocelot to be sold at the auction.

Then one day, they got a phone call from a lady who said, “You can’t sell a live ocelot on television!  They are dangerous wild animals!”

“How do you know this?” asked the PR people.

“I know because we had an ocelot, and it bit off my husband’s nose!” said the lady.

So the PR people called the pet dealer, and told him about the lady’s complaint. “Oh, don’t pay any attention to that,” said the dealer. “It’s just sour grapes because I sold her the ocelot that bit off her husband’s nose!”

In the end, we did sell the ocelot at the auction, but only after reading on the air a statement drafted by the lawyers, and requiring the buyer to sign an ironclad release also specially drafted for the purpose.