It’s October 13th 1961. About 11:00 p.m. Work is over for the day. But, before we can leave, we have to finish what remains of our daily cleanup: sweep and mop the studio floors. Cleanup the studio and the control room. Shut down all electronics. Pull the cameras back into their corral and neatly figure eight all camera cables. Then – Days end! Lights out! Head home!

By 11:30 p.m. give or take a few minutes, I am in my car on the way home, except for one quick stop at the Zebra Lounge, the favorite end of the day nightly stop. Shortly after one a.m. (closing time), I am heading down Storrow Drive. By 2:00 a.m. I am placing my ear gently against the pillow looking forward to a peaceful end of the week and then sleep.

Little did I know, nor could I have ever imagined the events that were about to unfold and how my life was about to change. About three hours into my reverie, I was unmercifully poked awake. Someone was yelling in my ear: “Wake up, wake up!” “Channel two is on fire and has just burnt to the ground.” I really didn’t want to face the day at 7:00 a.m.

I struggled to bring myself out of sleep. I was trying hard to find my way out of that middle distance between asleep and awake when nothing that is going on around you makes any sense. The radio was turned up and I began to focus on the news through the remaining haze of sleep. As I focused, I heard, “Early this morning at approximately 4:30 a.m. a devastating fire occurred at the Channel Two Studios on Massachusetts Avenue in Cambridge. The building is a total loss. More news about this fire in our next newscast in fifteen minutes.”

As I sat on the edge of my bed trying to clear my head, I was really hoping that sleep would come again. The haze lifted. I pulled on the clothes I’d left the station just a short three hours ago as all sorts of things raced through my mind: was it a carelessly discarded cigarette, arson, bad electrical wiring, a forgotten soldering iron that wasn’t unplugged, a discontent listener reacting to a program? What the hell happened? Was it something I did!? What?

Little did I know, nor could I have ever imagined that the three hours of sleep I got that morning of October 14th 1961 would be the longest hours I spent in bed for months – maybe years!

I lurched out of bed dressed just enough to be decent, but not shaved or showered as I usually did at the start of the day, and not dressed in my usual clean starched blue oxford button down shirt and chinos. I was too preoccupied with the morning news and still reacting to the news broadcast I heard while still in “the middle distance.” Body moving – mind trying to catch up – running on automatic.

As I opened the car door and turned the ignition key, the only thought I had was to get to the station to see for myself that this was no joke!

The trip that morning is a blur. I was almost at the intersection of Mem. Drive and Mass. Ave. when I saw a parking spot. What luck! I started running the remaining few feet to Mass. Ave. and turned facing the burning remains that were Channel Two. What a shock! 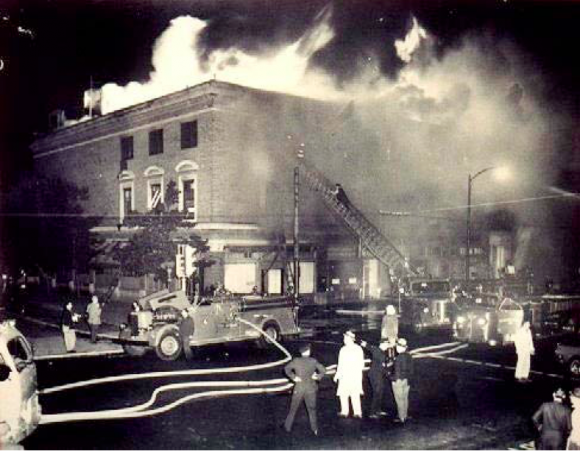 I kept running. I passed the steps at the front entrance of MIT, which was directly opposite the Channel Two Studio building. After turning onto Mass. Ave., my legs went into overdrive. If I had been running the Boston Marathon I would be on record pace! I heard applause. But even though I was pretty jacked-up and still a little hazy from my rude awakening, the applause brought me finally into reality mode.

They were all there, and they had all arrived before I did. Who? The whole gang. Bob Moscone dressed to the nines as usual. Ken Anderson, Jack Kean – smoking his.5¢ cigar. Bob Hall. Fran Abramowicz and others including my pal Al Hinderstein, Hindy, who joined me for lunch on those step from time to time when the weather was just right.

They had been watching the Cambridge Fire Department for a while and observing the progress of extinguishing the fire so they all knew the status of things. I ran up the steps – raised my hands in wonder and managed to let out a question: “So?” Silence.

The building was still smoldering. The fire department continued to pump water into the second and third floors of the building to completely douse the fire. It took a while. But, when they were satisfied that the fire was completely out, we were allowed to go into certain parts of the building which were deemed to be safe. The building had been a lot of things over the years before the Channel Two Studios were located there. (The exact location of the building has been memorialized with a plaque, which can be seen by visiting the space once occupied by WGBH at that time.)

The fire gutted the middle of the building. And destroyed the West end. The West end was the most flammable: scenery, wood, and sawdust accumulated in the scene shop. There was also an antique freight elevator. This area was also badly destroyed in the fire.

Fortunately, the East end of the building was spared total destruction and it was from the technical areas there that we were able to salvage some valuable technical equipment, which was stored at MIT’s Kresge Auditorium located on MIT property behind the Channel Two Studio building. Between the building and the Kresge Auditorium there was an alley: our parking area, if you got lucky and arrived early. At the time the fire struck, we were converting an old Greyhound Bus to a TV Mobile Unit to handle location production demand which was growing by leaps and bounds. Between the salvaged and repaired equipment rescued from the fire and generous donations from many other sources to numerous to mention, the “new” mobile unit was operable within weeks.

The most memorable vision I often recall that occurred during the few days that surrounded the conflagration that took our studios on that fateful night was of a Cambridge Firefighter during the cleanup of the remains of the fire.

It was on the day of or the day after the fire when we were told it was safe enough to enter the East end of the building to start saving whatever we could. I was working breaking down equipment in the Telecine area and the Studio “A” control Room, disconnecting miles and miles of wiring and moving salvageable gear to the storage location at Kresge Auditorium.

These areas (Telecine and the Studio A control room) were separated from the studio by glass walls so we were able to look out into the studio and see, by eye, the physical action taking place there during studio production.

I had already made several trips in and out of the building. I had just climbed the rear fire escape – again, to start more salvage – and as I cautiously prepared to remove more electronics from the telecine room, I happened to look out into the remains of the Studio and there in the middle of this burned and blackened void was a lone Firefighter standing almost up to his knees in water and other detritus left over from when the fire was at its worst. In his grasp: a huge hand auger – standard fire truck gear. Twisting it a half a turn at a time in an effort to drill a drain hole to let the heavy water collected in the second level of the building to drain out to avoid the possibility of a building collapse seemed to me to be a herculean task.

Little did he know, nor would he ever have imagined that a roller skating rink occupied that space years before and the floor was under laid with cork making a more gentle floor for falling roller skaters. When he pulled the auger, the hole closed up the way a wine cork closes around a cork screw. I couldn’t help but chuckle. He didn’t know, but I thought I had found a kindred soul.

We were both engaged in hopeless tasks. I was engaged in salvaging soaked, blackened electronics, which I could not imagine would ever work again. He too, was attempting the seemingly impossible. Years later after we had been long out of the Mass. Ave. Building, I would find water stained, blackened pieces of electronics that I was sure I personally salvaged from the fire and I would think of that Fireman. I have no idea whether he ever managed to drill through that studio floor. The building eventually had to be destroyed. All that is left now is a pleasant grassy, green patch along Massachusetts Avenue opposite the Main Entrance of MIT. And a plaque.

The lesson of the day: you have to keep trying no matter how impossible a task my seem, and I am glad I learned that lesson that day. Years later, I was still working at Channel Two. Who would have ever thought it? I often thought back to that Fireman’s hopeless effort whenever I was faced with a seemingly hopeless task of my own.

I was not the only one who wondered about the future of WGBH TV.

Did we dare think that like the beautiful Phoenix Bird, it would rise again from its ashes to become more wondrous than ever before. Would Channel Two emerge from the disastrous fire that destroyed it to become even more extraordinary than it had been since its beginning just a few years earlier. The answer already exists in WGBH’s illustrious history.

Mystery is a wonderful motivator. What next? That was the question on everyone’s mind back then. Channel Two had auspicious beginnings. All of the member institutions were great success stories themselves going back many, many years. The staff at that time (1961) were all goal driven, well educated, and focused on accomplishment and becoming pioneers in television broadcasting. Television was still in its very early years. After the fire, I don’t know of a single staff member who threw in the towel and walked away to find another future.

Or, was it a fateful day? I suppose any day one looses his place of business – where you have a job and income doing things you love to do with people you love to work with — can be called a fateful day. But this was a different fateful day.

Looking back over the last 55 plus years, it’s easy to relive moments, circumstances, people, places, activities and the many, many challenges that have been cast before me and how that contributed to my personal and professional growth. That fateful day placed many WGBHers on a path to accomplishment and success. There weren’t many of those original WGBH staff and those who followed shortly after the fire, who didn’t make Channel Two a career.

The spirit of those early staffers seemed to become imbued in others as they joined our ranks. The spirit was infectious. The prospects of a future now etched in history.

There is no doubt that Channel Two’s history plays one of the most significant roles in the Public Television Story. I am certain that all those who lived through the destruction of the Station in 1961 stayed on and others came because there was something magical about working here and it was patently clear that as our programming evolved, television technology improved and our ability to experiment was encouraged. The opportunity for personal growth was boundless.

Who could have ever imagined?