By Vic Washkevich, in the Boston University alumni magazine, May, 2015

Way back in the summer of 1957, 10 new scholars arrived at BU’s Graduate School of Communications with the mission to attend school by day and become the arms and legs of WGBH-TV by night. Our scholarships were made possible trough the generosity of the Lowell Foundation. 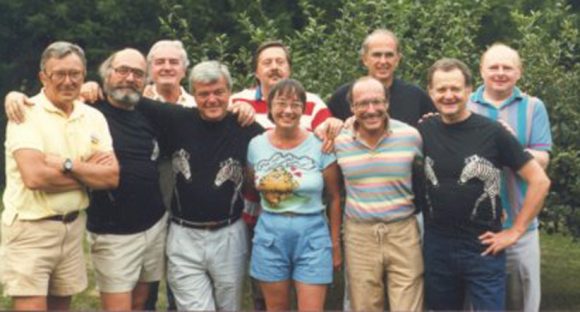 Back then, WGBH-TV was on air from 6 until 11 p.m., Monday through Friday. The station was on Massachusetts Avenue in Cambridge, directly across from MIT and one floor above a luncheonette, in a space that once housed a roller skating rink.

It was the TV equivalent of a garage band. The cameras were atop wooden fixed tripods that we prodded across floors furrowed by time and neglect, directing our tired picture tubes, rescued from the WBZ-TV dumpster, at luminaries from Harvard and MIT who discussed things esoteric. Surely, it was then and there that the phrase “talking heads” was coined and became part of the English lexicon.

In our youth, nothing seemed insurmountable. We approached every challenge with the old Mickey Rooney “Let’s put on a show!” enthusiasm.

All programming was live, back-to-back, and broadcast from a single studio. We raced from the director’s booth to man a camera, then to pull a cable, then to operate a boom mike every night for a year.

And so, with our primitive, fragile equipment, we aired the Boston Symphony Orchestra, the Boston Arts Festival, Father Norman J. O’Connor (known as The Jazz Priest), and much more.

Several of us made it through the entire year, became fast friends, and have remained close over the years via reunions at regular intervals, including John Fusilli (COM ’59), Stew White (COM ’58), Paul Noble (COM ’58), Bob Moscone (DGE ’49), and Don Mallinson (DGE ’56, COM ’57).