Excerpts from the New York Times

Ward Chamberlin Jr., a leading architect of the nation’s public broadcasting system who revitalized PBS stations in New York and Washington and nurtured the career of the documentarian Ken Burns, died on Thursday in Bedford, Mass. He was 95.

The cause was complications of dementia, his daughter Carolyn Chamberlin said. 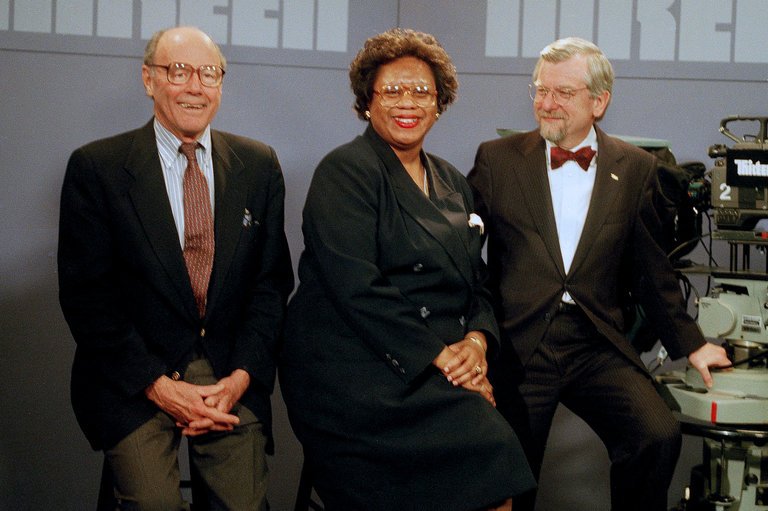 The two men were close: Mr. Pace had earlier been chairman of General Dynamics, the military contractor, and Mr. Chamberlin had worked for him there. They were also squash partners.

When Mr. Pace was appointed by President Lyndon B. Johnson to be the first chairman of the newly minted Corporation for Public Broadcasting early in 1968, he recruited Mr. Chamberlin to join him as chief operating officer.

He remained chief operating officer until he retired in 2003. He was also senior vice president of the Public Broadcasting Service, executive vice president and managing director of WNET in New York and president of WETA in Washington, which he transformed into the third most prolific producer of original programming after WNET and WGBH in Boston.

PBS was created in 1969 to connect local public television stations and to distribute programming. National Public Radio (now just NPR) was formed the next year under the corporation’s umbrella.

From 1975 to 1989, under Mr. Chamberlin, WETA introduced programs like “The MacNeil/Lehrer Report” and “Washington Week in Review.” At WNET, he was responsible for many of the station’s signature cultural productions and other original programming, including the series “The Secret Life of the Brain.” He extricated both stations from financial distress.

Mr. Burns was seeking financial support for his third documentary film, about Huey Long, the Louisiana governor and presidential candidate, when he arranged to meet Mr. Chamberlin to pitch it.

Mr. Burns recalled in a phone interview on Monday that he had been stunned to leave Mr. Chamberlin’s office with a check for $25,000. “They never did that before,” he said.

He was even more surprised by Mr. Chamberlin’s response years later when he learned that Mr. Burns’s series on the Civil War had grown longer than the originally projected five hours.

To which all Mr. Chamberlin asked was, “Is it good?”

The series, called simply “The Civil War,” was broadcast in nine episodes in September 1990 and watched by about 40 million viewers, setting a PBS ratings record.

“Ward never sought to take the limelight, as opposed to many of us who gravitate to it,” Mr. Burns said. “He was flabbergastingly generous and courageous and indispensable to my professional life.”

Ward was a giant in our industry and a special person to me, having taken me under his wing, so to speak, early in my career at WGBH.  We all owe a great deal to him for the wisdom and energy with which he helped shape CPB, PBS, WNET and WETA.

I will always consider him as one of my key mentors in public media.  He was one of the few people in the industry who understood our unique challenges in creating a culture where creative people could work and thrive.  There were only a handful of places where that was achieved and Ward was responsible for at least two of them!  Our views of our mission and values were closely aligned.