Steve Schwartz began his last radio show like he had so many others, cuing up pianist Horace Parlan’s “Wadin” — the song’s bass line striding purposefully out of the speakers, backed by the subtle swish of brushes on cymbals. “Good evening and welcome to jazz on WGBH,” he said as the song’s last notes faded. 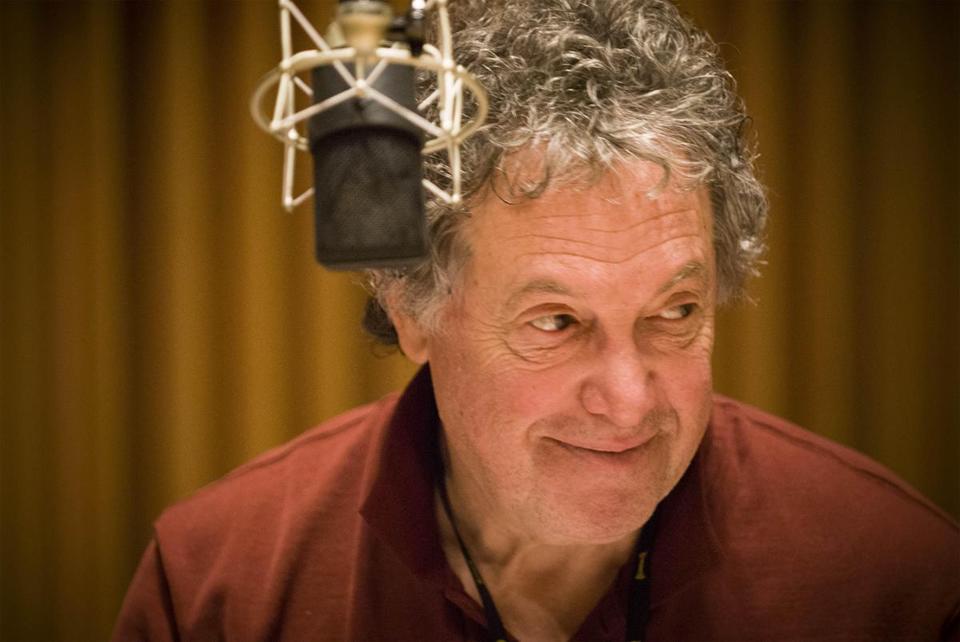 For jazz fans throughout Greater Boston and beyond, there was a hint of sadness in every tune he played during “Jazz from Studio Four” on July 6, 2012, as he edged closer to signing off a couple of minutes past midnight.

“As you may or may not have heard, this is my last program for WGBH radio — starting here back in 1985 and working my way towards bringing you jazz on a Friday night. And this will wind it up,” Mr. Schwartz said, before turning to the business at hand: more than three hours of carefully chosen music.

“The gentleness of his voice made his show easy to listen to, but he wasn’t just a great voice. He was knowledgeable about the music, too,” said Eric Jackson, a longtime colleague and host of WGBH-FM’s “Eric in the Evening” jazz show. “He knew the music. There are some announcers I’ve heard who I thought were abrasive, arrogant. Steve was this warm presence who invited you in when he was on the air with the sound of his voice and the music he played.”

Mr. Schwartz, whose tastes in jazz were first shaped by an interlude he spent in California as a teenager, died in Seasons Hospice in Milton March 25 of multiple myeloma. He was 74 and had lived in Jamaica Plain.

“My father wanted to make a change, so when I was 15 we moved to Los Angeles,” Mr. Schwartz said in an interview published on The Arts Fuse website. “It was there that I first heard jazz on the radio, and I was hooked.”

Indeed, when Mr. Schwartz began hosting jazz radio programs after returning to Boston, “he advertised his show, especially in the earlier years, as ‘acoustic jazz,’ which says a lot about his musical tastes,” Jackson said.

“In later years, he would surprise me when I’d hear something with a little electric piano in it,” Jackson added with a laugh. “I’d think, ‘Wow, he’s playing that.’ ”

In 2012, WGBH eliminated Mr. Schwartz’s Friday show. Jackson, who had been on weeknights, is now on Friday, Saturday, and Sunday.

After the public radio station announced the changes to make room for more news and information programming, jazz fans were so upset that they protested and held a jazz funeral.

“It wasn’t a total surprise, but it is a loss,” Mr. Schwartz told the Globe a couple of weeks before his final show. Boston’s jazz community, he added, “is losing an important venue for musicians to promote their events.”

In a February 2014 video interview that is posted on YouTube, Mr. Schwartz said that “to me the best part of doing radio was being able to promote the local jazz scene: Who’s coming into Scullers? Who’s coming into the Regattabar? Who’s got a new CD out? Local talent, playing here and there. Online, you know, it’s — I hate to say the word — just jazz.”

Of all the perks of hosting a radio show for nearly three decades, he added, “I just want to say that promoting the local jazz scene one night a week was most, most gratifying.”…

WGBH hired Mr. Schwartz to run the equipment for a taped overnight blues show. Then he suggested launching a jazz show to fill the time between the end of the blues program and the beginning of Robert J. Lurtsema’s “Morning pro musica.” Mr. Schwartz eventually was hired as program manager, and also was the engineer for live jazz broadcasts at WGBH…

For Mr. Schwartz’s many fans, his last show was a eulogy of sorts — played out in favorite jazz tunes — though no one could have guessed he would be diagnosed with multiple myeloma only a few months later. He ended with a set of songs sung by Karrin Allyson. Ever the professional, he signed off as if it were any show, not his last.

“Thank you for your phone calls earlier tonight. They do mean a lot to me and it’s great to hear from you,” Mr. Schwartz said. “Have a good weekend. Thank you for listening.”

By Tom Reney – From Jazz News You Can Use

Friday night, as I was noting Day 30 of a cold virus, my friend Steve Schwartz was admitted to Seasons Hospice in Milton, Mass.

Yesterday morning, while driving east for lunch with my niece in Beverly and afternoon drop-ins at bluesman Peter Ward‘s 60th birthday gig in Cambridge and a visit with Jack Woker at Stereo Jack’s, I checked my messages during a routine stop at Natick Plaza on the Pike. There were several, but only one that mattered, the one with word that Steve died around four o’clock Saturday morning, one month shy of his 75th birthday, and several years into combating cancer and other grave health matters.

I last spoke with Steve two weeks ago. He was fairly upbeat with the latest on his wife Constance Bigony’s art work, reports on his three kids, Eric, Peter, and Jamie, and his grandchildren, and curious to hear more about our grandsons Bisbee and Atlas. It ended, as most calls did with Steve in recent years, with the hope that we’d be off gallivanting sometime soon.

Alas, today I know that Steve’s been released from a great deal of pain, and those of us who knew him have lost a good, kind, warm-hearted man.

I knew Steve for about 25 years. Before we met at a Joe Lovano concert that he emceed at the DeCordova Museum around 1990, I would hear him on WGBH where he hosted Jazz from Studio Four. I spent many Sunday nights returning from the Cape with Steve guiding the way, always with his mellow, down-home theme song, Horace Parlan’s “Wadin’,” kicking things off at 7 p.m., and often with the word that he’d returned from the Cape a few hours earlier.

Perhaps more than any other experience I’ve had as a listener to radio, it’s the memory of Steve’s references to Fisher Beach in Truro and the details of a meal he’d had in P-Town that give me a sense of why I needn’t be surprised when listeners tell me about some seemingly trivial bit of personal material that I’ve shared while hosting Jazz a la Mode. “Oh yeah, but how about the night when I played those rare 1941 airchecks by Lester Young?” Alas, it’s usually a personal anecdote that resonates most.

Steve and I shared a love of jazz, movies, fresh seafood, and bike rides. He’d owned a bike shop in Mattapan before his radio career began. He was a great fan of Preston Sturges films, especially Sullivan’s Travels, which he relished sharing with friends.

He grew up in Dorchester and spent a few years in Los Angeles during his mid- to late-teens. That’s where his love of jazz took root, and he was fond of recalling the day when Gerry Mulligan walked by as he was listening to a new Mulligan LP in the listening booth of a Santa Monica record store.

During his Boston youth, he sang in a street corner doo-wop group, and maintained friendships with his harmonizing homies Jeffrey and Hal. Like a true Bostonian, he didn’t know my hometown of Worcester at all before we met, but he was eager for a tour, and we finally got that done a few years ago. I got to show him the Valley too, and in recent years, we would meet halfway in Sturbridge for lunch.

Steve was the best kind of friend, one who was eager to hang on the next unscheduled day on the calendar. His opening line was often, “Two Jews sitting on a bench;” his favorite tag was, “News at 11;” and in notes, he borrowed from Thelonious Monk for his closing salutation, “Always know.”

While courting Meg fifteen years ago, I had occasion to spend dozens of weekends with her near Boston, and during that time Steve and I got together frequently to hear jazz and to ride bikes. In addition to negotiating the city’s busy streets, we took trails to Lexington and Concord; rode the East Bay trail south of East Providence; the Emerald Necklace of Jamaica Plain, West Roxbury, and Brookline.

We ate all over too: Belle Isle in East Boston, Mac’s Shack in Wellfleet, Red Wing in Walpole, Summer Shack in Cambridge, Twin Seafood in West Concord, always in pursuit of great seafood at establishments hospitable to bike shorts. Steve had a bead on every pop-up lunch spot in Boston, and while attending jazz conferences and festivals, we maxed-out per diems in New York, New Orleans, Long Beach, Los Angeles, Santa Barbara, Toronto, and Montreal.

Steve was a gourmand of informal dining spots here, there, and everywhere. When word came down that Uglisich’s, a no-frills purveyor of alligator stew and oysters by the dozen was closing, Steve and his beloved Connie flew down to New Orleans for one last hurrah.

Steve’s was one of the great voices of Boston jazz radio. In that capacity, he also engineered and produced scores of concert broadcasts for WGBH and for Jazz Set, Jazz Alive, and other series on NPR. He engineered the Jazz Decades with Ray Smith, which for years preceded Jazz From Studio Four. He produced state-of-the-art profiles on such New England-based jazz greats as George Russell, Jackie McLean, Gunther Schuller, Archie Shepp, Steve Lacy, and Yusef Lateef. And he conducted several highly memorable panels at IAJE, including interviews with Dan Morgenstern and Nat Hentoff. Steve knew and was known by everyone in the business.

I’ll miss Steve more than I can say at this sad hour for I’m grateful to have enjoyed such an agreeable friendship with this truest of true friends. Rest in Peace, my man.

For the 5 years or so that I was the business and marketing head of ‘GBH radio, Steve was a major presence at the station beyond his show, Now’s the Time. He, Eric Jackson, Ron Gill, Mai Cramer, Holly Harris, and Ron Della Chiesa pushed for jazz and the blues to be recognized as the amazing and genuinely American art forms that they are.

Steve and Margot Stage recorded Jazz Portraits, which Margot said were amongst some of the best of her work. Steve produced an Ellington concert at Berklee featuring Danilo Perez on piano; today Danilo heads the jazz department at the school. He guided the recording of the New Orleans annual Jazz Festival and other important jazz concerts. All of this was under the guidance of Marita Rivero, now the director of Boston’s African American Meeting House, and, I believe, the only female person of color to reach the Vice President level at WGBH.

I liked working at WGBH, on both the documentary and the radio side, and always felt it was a 12 year graduate program. The local public radio station was the part of the foundation where for awhile people could and did experiment with different art forms based on their own cultural traditions. Radio productions are less expensive to produce than film, and radio is an intimate medium that distinguishes it to this day from other kinds of media. I can only hope that ‘GBH Radio will once again embrace music from many cultures. People love music!