Cookbook authors and “culinarians” Sheila and Marilyn Brass have been part of WGBH for more than 20 years. Sheila worked for Peter McGhee and Margaret Drain in National Programming and Marilynn worked as a consultant and for the How-Tos.

Now they are hosting a new PBS series. In “The Food Flirts,” premiering July 28, they are on a mission to bag their culinary bucket list.

Deep in the heart of Chinatown, two women of a certain age hover before a noodle-making machine, preparing ramen. The noodle-maker has a name: Gertrude.

“Push, Gertrude, push!” yells one of the women.

This is also great television. The women are Marilynn and Sheila Brass, known as the Brass Sisters. Marilynn is 75. Sheila is 80. Together, they star in the upcoming PBS show “Food Flirts,” an eight-episode series debuting on July 28… 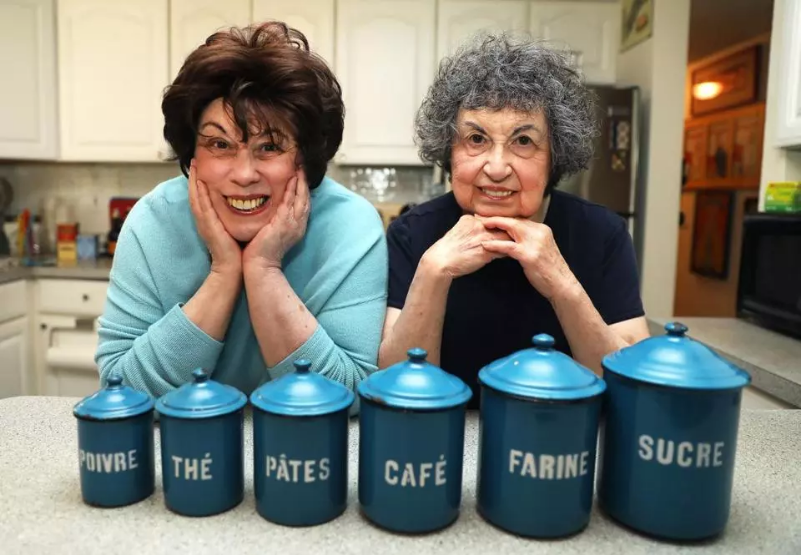 In each episode, they visit two restaurant kitchens to sample two ingredients they’ve never had before. Then they retreat to their shared Cambridge abode to create a dish that features both…

Lest you think these are two twittering grannies endearing themselves to patient chefs, think again. They have lived as neighbors or roommates for four decades — no children, never married, though both have “come close,” Marilynn says — opting instead to cook and bake.

“We have 130 years of combined experience,” they like to say.

And they know their stuff.

This isn’t a slicked-up Food Network affair. Instead, everyone pitched in, including former TV executive Seidel, who helped to clean the ladies’ bathroom and take out trash. Various rooms in the small Cambridge house functioned as dressing rooms and staging areas.

“The thing I loved is that everybody did everything. We shot four episodes in two weeks without a lot of money. I did Sheila’s makeup and mine because I’ve taken a tutorial with a good makeup person,” says Marilynn.

No divas here. What does it take to live together, film together, and cook together for all these years?

“We work like dogs, but we love it. And we apologize to each other. We say ‘Thank you,’ or, ‘I didn’t mean to be rude.’ We never go to bed angry,” Marilynn says.

“And we didn’t gain an ounce during filming,” adds Sheila.

From a Press Release

The Food Flirts saunter onto the primetime scene

Cookbook authors and culinarians Marilynn and Sheila Brass — the Brass Sisters, a.k.a. “The Food Flirts” (Instagram: @thefoodflirts) — are two passionate food explorers of a certain age, on a mission to tackle their culinary bucket list one bite at a time.  In each episode of this new, six-episode series on PBS, the Boston-based food ladies “flirt” their way into chefs’ kitchens to uncover ethnically unique and delicious delights, then head home to experiment for themselves — creating cross-cultural culinary mash-ups that viewers can try at home.  The first two episodes of THE FOOD FLIRTS premiere Friday, July 28, 2017, 10:00-11:00 p.m. ET (check local listings), after episode eight of the food show phenomenon THE GREAT BRITISH BAKING SHOW. 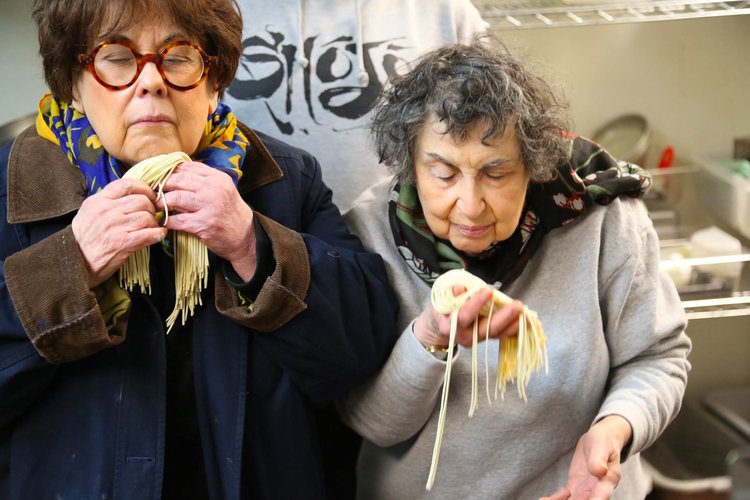 “The Brass Sisters have always been two favorite food people in Boston, and I’m thrilled to bring them to a wider audience with THE FOOD FLIRTS series in partnership with PBS,” said Seidel. “Think Two Fat Ladies meets Julia Child – these women have food chops, an alluring sense of humor, and are always ready to share culinary wisdom learned along the way!”

The longtime Cambridge. Mass., residents have 130 years of combined baking and cooking experience. Recently named “Food Heroes” by the Mayor of Cambridge for their various food contributions, they are the authors of Baking With The Brass Sisters (St. Martin’s Press 2015), Heirloom Cooking With The Brass Sisters (Black Dog & Leventhal, 2008), and Heirloom Baking With The Brass Sisters (Black Dog & Leventhal, 2006), which was a finalist for the James Beard Foundation award in the Dessert and Baking category. Their books are consistently best-sellers; Food & Wine magazine has called the sisters “dessert geniuses,” and selected their books for its annual The Best of the Best 25 Cookbooks.

The Brass Sisters have curated one of the country’s most comprehensive collections of culinary antiques, including: a copper batterie de cuisine from the early 19th century; chocolate, ice cream, candy, aspic and other food molds; menus; and food advertising signs and artifacts. Their collection includes 6,500 cookbooks, some dating from the 1600s, and 1,800 books on antiques.

For more information on The Food Flirts, please visit hotlemonprods.com/foodflirts.