A service to remember and celebrate the life of Torrey Reade will be held on Saturday, August 12, 2017 at 11 AM. The Quaker memorial service will be at the Lower Alloways Creek Friends Meetinghouse in Hancocks Bridge, Salem County, New Jersey. 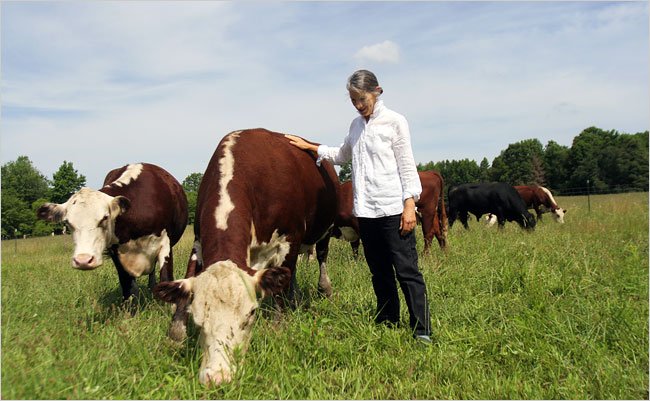 Torrey  was born on April 6, 1951. After relatively brief stints at selling the Real Paper in Harvard Square, working at WGBH, and operating her own investment company in New York, she lived and farmed in Salem county, NJ for almost thirty years. On Sunday evening July 16, 2017 she died at the farm after a year-long struggle with lung cancer.

Torrey worked at WGBH from 1973 to 1978, in the first year or so writing scripts with Tim Mayer for an early attempt to bring Masterpiece Theatre-like drama to American television. When that project ended, she went to work for Broadcast Manager (VP) Mark Stevens, as his right arm. Together they acquired programs from PBS, EEN and other public TV entities from around the country, and created the local schedules for channels 2 and 44. In those pre-computer days color-coded daily schedules were hand-written by Torrey with colored ink in meticulous detail on long sheets of paper hung on the wall. With day-of-air recordings, they were the only record of what aired on the stations.

Among other duties, Torrey would dictate on the phone various flags handed down by PBS regarding “adult situations and language;” this required repeating out loud strings of bad words and explicit situation descriptions that, out of context of their programs, often attracted an appreciative group of nearby PR and other broadcast department staff crowding into her little office on the third floor at 125 Western Ave.

In 1978 Torrey left for business school  across the parking lot at Harvard. She went on to brief stints in banking and on Wall Street, after which, with a partner from the Street, she formed an investment company, Neptune Partners. Her gardening passion resulted in a roof-top paradise above her loft in Tribecca. In the early ’80’s while looking for a weekend place in the country so she could escape the city and have a bigger garden, she came across a large, neglected, 18th century farm in south Jersey, which quickly became her home and the organic farm she and husband Dick McDermott developed and ran for the better part of 30 years.

In lieu of flowers, please make a contribution to any effort you feel is appropriate or donate to one of the following groups:

The Salem Friends Quarterly Meeting is working to preserve and restore the Lower Alloways Creek Friends Meetinghouse, where the service will held on Saturday. It is a historic building that Torrey held the keys to for many years, and to which she was very attached. The Meetinghouse, built in 1756, is in original condition, but in need of some tender loving care. A typical mid-18th century Quaker meetinghouse, it retains its old benches and interior panels made of seasoned Jersey pine. The exterior brick was made from local clay. The bricks on the original east side are laid in Flemish Bond. The Meeting was laid down in 1938. Contributions for the restoration of the building can be sent to  Salem Quarterly Meeting (marked “Torrey Reade”),PO Box 55, Woodstown, NJ 08098.

Or consider the Many Hands Sustainability Center, an organization Torrey supported. The mission of Many Hands Sustainability Center, Inc., a 501 (c)(3), is to promote methods of sustainable living, including organic agriculture, renewable energy, food preservation, homesteading skills, nutrition and its centrality to human health. The Center works to serve the needs of all populations, including such under-served groups as former prisoners, youth, and family farmers.

Born and raised in Wayland, MA, Torrey attended public schools and graduated from Carleton College in 1972. For seven years, she worked in the broadcast division of WGBH, Boston’s public television station, helping to introduce such innovative programming as an LGBT pledge night. After graduating from Harvard Business School in 1981, she worked for several large financial institutions and moved to Reade Street in Manhattan. In 1985, she launched the first of several investment funds with business partner Frank Garcia, specializing in distressed companies.

A voracious reader who could recall the plots and passages of novels she’d read twenty years previously, Torrey felt unfulfilled by Wall Street life. She began growing flowers and vegetables on the fire escape of her Tribeca co-op, then built a massive roof garden. In 1989, she bought an historic brick farmhouse in Salem, N.J., and spent many years restoring not only the house, but also the 125 acres of fields that surrounded it. The result was Neptune Farm, an organic farm that raised asparagus, blueberries, beef, and lamb. The New York Times profiled Torrey in a 2008 article, “Deserting the Gray Canyons of Wall Street For the Green Pastures of the Farm.”  At her 20th Carleton reunion Torrey reconnected with Dick McDermott, her college boyfriend and artist, who joined her on the farm.

Torrey was grateful to all the neighbors and organizations who had helped her learn to farm, and felt obliged to return the favor. For the rest of her life, she gave back to the community with her financial, intellectual, and organizational skills. She wrote grants, sat on boards, and advocated for historic preservation, farmers’ markets, and solar power. She presented at farming conferences, mentored younger farmers, and was a member of the board of the New Jersey Farm Service Agency, the New Jersey Agriculture Development Committee, Northeast Organic Farming Association, and the Salem County Historical Society.

Torrey did not want a funeral.  In lieu of flowers, contributions can be sent to: Many Hands Sustainability Center, http://manyhandssustainabilitycenter.org/ ; the National Partnership for Women and Families http://www.nationalpartnership.org ;  or Salem Quarterly Meeting (marked “Torrey Reade”), PO Box 55, Woodstown, NJ 08098.