From the Library of Congress

The Library of Congress and Boston public broadcaster WGBH will celebrate the 50th anniversary of the passage of the Public Broadcasting Act of 1967 with a series of panels featuring pioneers and experts in public broadcasting Friday, Nov. 3, 2 –6 p.m. 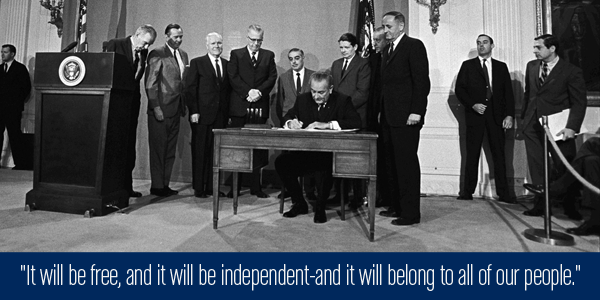 The symposium — “Preserving Public Broadcasting at 50 Years” — will be held in the Montpelier room on the sixth floor of the Library’s James Madison Memorial Building, 101 Independence Ave., SE, Washington, D.C.

The event is free, but tickets are required and there may be special restrictions. To secure tickets, visit this event-ticketing site: preservingat50.eventbrite.com.

Signed by President Lyndon Johnson, the act established public broadcasting as it is organized today and also authorized the Corporation for Public Broadcasting (CPB) to establish and maintain a library and archives of non-commercial educational television and radio programs. CPB established the American Archive of Public Broadcasting (AAPB) in 2009 and, in 2013, the Library of Congress and WGBH assumed responsibility of AAPB, coordinating a national effort to preserve and make accessible significant at-risk public media.

A Library report on television and video preservation in 1997 cited the importance of public broadcasting: “[I]t is still not easy to overstate the immense cultural value of this unique audiovisual legacy, whose loss would symbolize one of the great conflagrations of our age, tantamount to the burning of Alexandria’s library in the age of antiquity.”

The initial AAPB archive, donated by more than 100 public broadcasting stations, contained more than 40,000 hours of content from the early 1950s to the present.  The full collection, now more than 50,000 hours of preserved content, is available on-site to researchers at the Library in Washington, D.C., and WGBH in Boston, Massachusetts.  Nearly a third of the files, however, are now available online for research, educational and informational purposes at americanarchive.org.

During the symposium, panelists will examine the history of public broadcasting, the origins of its news and public affairs programming, the importance of preservation and the educational uses of public broadcasting programs for K-12 and college education, scholarship and adult education.  Also highlighted will be some of AAPB’s most significant collections, such as the “PBS NewsHour” and its predecessors, which are currently being digitized for online access, and full interviews conducted for “Eyes on the Prize” and “American Experience” documentaries.

For more information and to register: preservingat50.eventbrite.com

The event also will be livestreamed on the Library’s Facebook page at facebook.com/libraryofcongress and its YouTube site (with captions) at youtube.com/LibraryOfCongress.