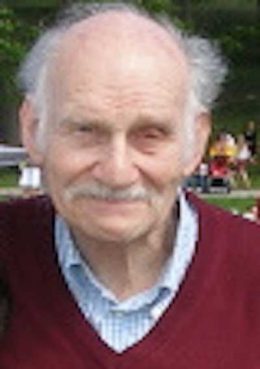 Richard Clark Sterne, professor of English and American Studies at Simmons College for 42 years, passed away July 17 at age 91. He is the author of The Nation and Its Century, a history of the venerable liberal magazine, published on its centennial in 1965, and Dark Mirror, The Sense of Injustice in Modern European and American Literature.

For several years in the 1960s, he was the host of WGBH’s Just Published, a half-hour Boston-based television show with poets and authors ranging from Anne Sexton to John Fowles and Ralph Nader. Unfortunately, it was broadcast at the same time as Batman, which sometimes caused a dilemma for his young son Daniel, an avid Batman fan. In the 1980s, he was a seminar leader and consultant with the Humanities and the Professions Program at Brandeis, leading discussions with judges about law and literature.

Richard, known as Dick to his friends, was a Francophile who taught in both French and English during a Fulbright in France in the 1958-59 year and returned frequently for research and vacations with his wife Ruth and his sons, Daniel and Larry. One of Dick’s favorite activities was to get into animated political discussions in French cafes. Dick also taught English on a Fulbright at the University of Lisbon in Portugal for the 1962-’63 academic year, learning conversational Portuguese during his stay. A lover of languages, he also taught himself Spanish, Italian, Russian and ancient Greek, but his sons most appreciated his wonderful fake Swedish.

An inveterate and unapologetic punster, Dick had real dramatic talent, which he used to entertain his good friends during more than 30 years of active participation in a neighborhood play-reading group near his home in Newton Highlands. He was also a near Master-level chess player, loved a good game of tennis, swimming in Crystal Lake and long, brisk walks.

Dick’s other passion was social justice and progressive politics. He was a past chairman of the anti-war Newton PAX group, which played an important role in helping Father Robert Drinan win a seat in Congress in 1970.

A native of Brooklyn, N.Y., Dick was a Navy veteran and earned a B.A. from Columbia College and a Ph.D. from Harvard University. He is predeceased by his beloved wife of 64 years, Ruth, who passed away in March 2017. He is survived by Daniel Sterne and his wife, Kyle, of Arlington; Larry Sterne and his wife, Diana of Cape Elizabeth, ME and Bozeman, MT; and his granddaughter, Isabel and her partner, Lukas Johnson, of Chicago. He was the son of Eugene and Ruth Sterne of Brooklyn, NY.

In lieu of flowers, donations in Dick’s memory may be made to Amnesty International.