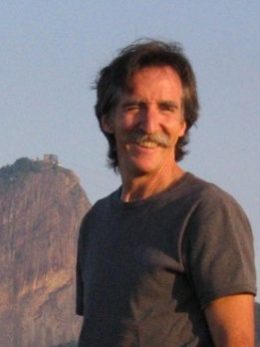 From the Martha’s Vineyard Times

Brian Kirwan Dowley, of Cambridge and Martha’s Vineyard, died on August 10, 2018, on his beloved Island. He was 67.

Brian spent time most every summer on the Vineyard throughout his life. He was a part of a long line of Dowleys to reside on East Chop since 1903, when George Butnam Dowley, his great-grandfather, discovered the Island on a trip from Boston to a religious revival meeting in the Campgrounds. Island friends, the sea, the light, the sound of bell buoys were part of Brian’s soul, and Island influences became an integral part of his artistic and professional vision. The Vineyard was where he wanted to spend his last days.

As a director of photography for over 35 years, Brian shot dozens of documentaries and narrative films for “NOVA,” “American Experience,” “Frontline,” and independent documentaries on subjects close to his heart. Brian was known for his aerial production, remote camera operation, and lighting design. His work took him around the world for clients including PBS, National Geographic, the BBC, and Al Jazeera, as well as many independent features and longtime corporate clients such as BMW.

In 2003, Brian won the Peabody Award for his film “The Rise and Fall of Jim Crow.” His work was twice nominated for an Emmy, and over the years he contributed to many Emmy-nominated films. He often said how lucky he was “to get away with” making his living doing work that inspired him. His talent and inspiration showed in every frame.

Brian was particularly proud of three Vineyard films: one about Polly Hill and the arboretum she planted, Antidote Films’ “Charlotte, A Wooden Boat Story” — a documentary about the building of Nat Benjamin’s wooden schooner — and the aerials for Thomas Bena’s “One Big Home,” about community and the risks of overbuilding. Brian was also proud of the work he did on Atul Gawande’s moving “Frontline” film, “Being Mortal.” Atul Gawande’s kindness and work were deeply inspiring to him. He felt privileged to share intimate moments with terminally ill patients. Ironically, this film was completed shortly before his own cancer struggle began. “Being Mortal” was shot in the same Boston hospital where he was later treated for nearly two years for the leukemia that ultimately took his life.

A graduate of Rhode Island School of Design (RISD), where he studied with the renowned photographer Harry Callahan, Brian graduated with a B.F.A. in photography in 1973. He completed an M.F.A. in film at RISD in 1975 under the guidance of Polish filmmaker Marian Marzynski. His master’s thesis was a creative short film called “Bag Kind,” a creation story with fellow students wrapped in black plastic bags dropping from the sky and gliding across a frozen pond. “Bag Kind” brought together Brian’s two loves — film and ice.

Brian loved ice skating. His graceful back-and-forth glide aptly suited his lanky frame. He always compared skating to dancing, and loved pond skating on black ice and pickup games of hockey, chasing pucks through the snow. He was on blades from a very young age where he grew up in Troy, N.Y. He continued to play hockey and skate all his life, and was dedicated to his teammates, with whom he found ice time at odd hours of the morning and night in various rinks around Boston.

Brian’s love for hockey was matched by his love for teaching. As a coach for Cambridge Youth Hockey (CYH), he discovered that teaching its wonders to others only enhanced his love for the game. He intuitively understood that coaching was not only about the techniques and strategies of hockey, but a respect for other players and the intricacies of the game. His young teams showed a camaraderie, inclusiveness, and joy that is rare in a highly competitive sport. His creative, gentle spirit created a consistently positive and caring culture in his teams. Coaching at CYH became one of the great joys of his life.

Music was never far from Brian. He played guitar and mandolin, and loved jamming with his sons and friends. As he wished, he was surrounded by this loving community and live music in his final days.

Brian’s devoted wife, Mimi Michaelson, lovingly shared his life as well as his final days. Their marriage was not nearly long enough for either of them. Close by were his amazing sons, Malcolm, of Boston, and Luke, of Santa Monica, Calif. No one was more important to Brian than his boys.

Brian is survived by his siblings, Jennifer (Millerton, N.Y.), Gillian (Chicago), Craig (Togher, Ireland) and Christopher (Marblehead), as well as his mother, Lal Dowley of East Chop. He was a favorite of all his nieces and nephews: Addison and Marion in Millerton, N.Y.; Nicole and James in Chicago; Turlough in Ireland; Gavin in Marblehead; and Michael and Charlie in Chicago.

Brian’s ashes will be buried near his father, Robert C. Dowley, and his grandmother, Marion Curtis Dowley, in the Oak Grove Cemetery in Vineyard Haven.

Contributions in Brian’s name may be made to Cambridge Youth Hockey, P.O. Box 381872, Cambridge, MA 02239-1872. Or go online to gofundme.com/brian-dowley-youth-hockey-fund.

Or you could make blueberry pancakes from scratch every weekend for your friends and family, as Brian often did. A service to celebrate Brian’s life will be held on the Vineyard and in Cambridge later in the fall. Brian lived in Cambridge for over 40 years, and will be terribly missed.