Congratulations to Paula Apsell ’69! The long-time senior executive director of the PBS science program “Nova” is the first science journalist to ever receive the Lifetime Achievement Emmy Award. The official ceremony took place on October 1 at the Frederick P. Rose Hall at Lincoln Center in New York City. 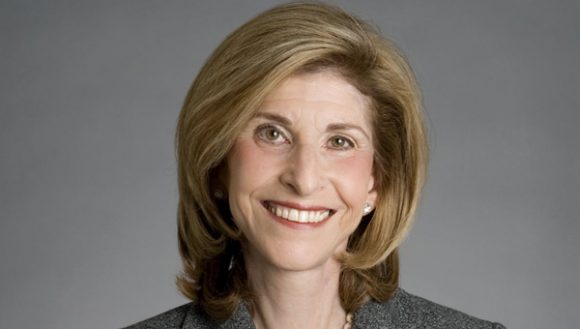 From its humble beginnings at Boston’s WGBH station as an obscure documentary show, “Nova” has grown under Apsell’s leadership into a worldwide smash hit. The series is now the most popular science series on American television, with an average of 5 million viewers per episode, and one of the top science sites online.

“I am tremendously honored by this award,” Apsell wrote in a recent email to BrandeisNOW, “but I am not just honored for myself. To me, this is a celebration of ‘Nova’ and the fantastic team behind the series; science and science journalism; and WGBH and public media.”

Family and friends, along with WGBH and industry colleagues past and present gathered to honor her more than four decades in science journalism, and 33 years at the helm of NOVA.

PBS President Paula Kerger presented the award, noting, “You cannot tell the story of NOVA without telling the story of Paula Apsell … I am so grateful to the Academy for recognizing Paula—for her relentless curiosity, for making science relatable, and for all that she does to encourage and empower young women.”

Accepting the award, Paula began by quoting one of the most influential scientists of all time, “When Sir Isaac Newton, who gave us the laws of motion that enable us to reach for the stars, was asked to explain his accomplishments, he said, ‘If I have seen further, it is by standing on the shoulders of giants.’ Now I obviously have little in common with Sir Isaac, but I, too, stand on the shoulders of giants.”

Paula went on to express heartfelt thanks to colleagues at PBS, CPB, WGBH, and NOVA, and especially to NOVA founder Michael Ambrosino saying, “He saw science as a story–and he believed if we told it right, with powerful visuals and characters driven by a passion to understand our world, people would watch. They did. And they still are.”

Paula ended her acceptance remarks by thanking her husband Sheldon; children Emily, Natalie, and son-in-law David; and grandchildren Daniel and Livia, whom she calls “the giants of my personal life.” Several renowned scientists and experts paid tribute to Paula on the Emmy website, including Robert M. Hazen, senior staff scientist of the geophysical laboratory at the Carnegie Institution for Science, who said, “I have watched her progress over more than 30 years and continue to be amazed at the way she steers the great ship that is NOVA.”