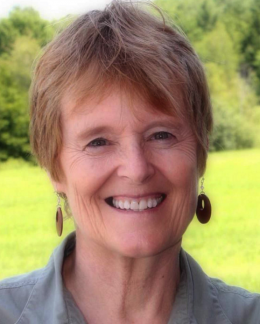 Bliss Bruen passed away quietly in her home in Durango, Colorado on September 11th.

In the late ‘60s. I convinced Bliss to leave San Francisco and to join me in Boston. I introduced Bliss to WGBH and she immediately shared my enthusiasm for the station, the staff and the programming. It’s no exaggeration to say that she had a radiant personality. It was obvious that rarely had a name so fitted and described a person as did hers.

Already an accomplished photographer, producers and directors at the station soon began to recognize her professionalism. One of her first assignments was as a freelancer working with Lois Johnson who was producing a Language Arts children’s series, the name of which escapes now but I remember that it was innovative. The production goal was to create “story starters” that when shown in a classroom would encourage children to want to write their own finish to the story.

The first one was shot was with a nine year old boy and his huge, imaginary dog named Toomph as they explored abandoned buildings on an island in Boston Harbor. It was written by Mary Feldhaus-Weber.  The entire fifteen minute program was done with a video camera moving through Bliss’s images with a narration, music, and FX track. Children loved it.

The next one she worked on in that series was with Keith Carlson and used a similar format. It was the story of a lovely little Citroen Deux Chevaux named Napoleon who escapes from the city for the quiet and the clean air of the country but returns to Harvard Square as a giant flowerpot when he realizes that he was crushing the meadow grass and putting out exhaust smoke into the clean air of the beautiful country he loved. Her photos established a personality to the little car, an essential reason for the success of the piece.

For a program in the series, that featured a Cambridge-based improvisational comedy group she took photos for the study guide.

I think her favorite assignment was ZOOM. Chris Sarson was preparing the series and he, with Bliss and longtime art director Chris Pullman,  produced an opening of a montage of charming, high energy photos of the ZOOMers. Over the next few years, Bliss really enjoyed working with and getting to know ZOOM casts  Bliss had a remarkable way of connecting with people and she seemed to click especially well with the ZOOMers, She became a part of the production family for the next several years, a fan of the show and of the ZOOMers.

We moved to Washington, DC where for several years I was Senior Producer of The Science Program Group. Bliss was the “go to” photographers for the Group and traveled around the US taking publicity portraits of participants almost a dozen productions. Some of my favorite portraits from this time of her work were of William Menninger, Marjory Mazza (Mrs. Woody) Guthrie, William Lear, Edward Teller, and B.F. Skinner, but there were many more. (I think the only one who wasn’t charmed by Bliss was Dr. Teller).

We separated not long after we moved to California. Several years later she remarried and moved to Durango, Colorado, Our sons, David and Sam divided their time between Petaluma and Durango.

Bliss soon became a community leader in Southwest Colorado. She brought her passion for Public Broadcasting with her to Durango where she helped found KRMU, the PBS station there and was a great supporter of local programming.

The day after her death, the Durango Herald, a regional newspaper in the Four Corners Region, ran a lengthy obituary outlining some of her civic achievements. The next day, there appeared in the paper, an editorial, a lengthy, and achievement filled appreciation of Bliss. It was a fitting tribute.

From the Durango Herald

Durango loses a passionate volunteer who built a stronger community

Durango lost one of its most visionary community organizers Tuesday morning when Bliss Bruen died after a brief fight with aggressive cancer.

The suddenness of her passing has us collectively grieving a woman whose work during her three decades of living here was so impressive that we feel urgently that we need to pick up where she left off, in case we let her legacy flicker.

Bliss was a convener. A connector, a do-er, a unifier.

Her wide-open view of the world made her a masterly community organizer who started at the grass roots and worked up to mobilize us when we didn’t even know where to start.

One of Bliss’ greatest skills was to find out what your interests were and then connect you with someone who shared them. She knew the meaning of strength in numbers. Since her death, numerous stories already have been shared by those who said they had a small idea that Bliss helped to make a reality – often because she was the connection they needed to act.

She knew that organizing, mobilizing and educating people was how we create a sense of community. She was keen to hear about all the parts that make us do our jobs, educate our children, teach our neighbors, grow our shared gardens.

After her own children were grown and out of school, she remained deeply involved in ensuring students had the best education this community could provide.

She was a documentary filmmaker, and she shared with us films from all over the world that made us feel connected to something beyond our small corner of Colorado.

She had persuasive leadership ability, she was full of empathy, and she made you feel like your job was the most important one in the world – and then she asked how she could help you.

Bliss was also a loyal friend and tremendous supporter of this newspaper. She believed deeply in our role to hold power to account and that a free press is the lifeblood of democracy. She was a champion and defender of our work, and was always prepared to convene stakeholders to help sustain us.

Her devotion was just as deep in public media.

Among her last acts to ensure that our community stays informed was bringing to fruition her vision for collaboration and innovation between media and educators.

The new Rocky Mountain PBS Regional Innovation Center at Fort Lewis College was the latest to open based on the groundwork Bliss laid during her years-long volunteer service to the public television station.

The swiftness of her death – only weeks since her diagnosis – leaves us stunned and searching for a soft place to land.

We may never fill the hole she left, but Bliss left us well-connected. And the most honorable thing we can do is convene in the ways that she showed us and set about together to continue her work.