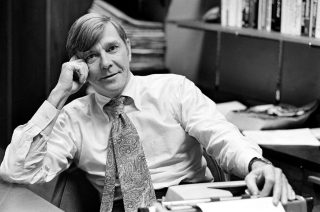 The WGBH community notes with sadness the passing of Russell Baker, former host of WGBH’s MASTERPIECE (1993-2004; then MASTERPIECE THEATRE). Baker died on Mon, 1/21 following complications from a fall. He was 93 years old.

A two-time Pulitzer Prize-winning journalist who had a long-running column in The New York Times, Baker succeeded MASTERPIECE host Alistair Cooke, noting, “In America, if you’re not on television, you’re not an American. I’m a huge fan of MASTERPIECE THEATRE, and I thought this was the most honorable way to satisfy that lust to be on TV.”

From The New York Times

Russell Baker, the two-time Pulitzer Prize-winning author whose whimsical, irreverent “Observer” column appeared in The New York Times and hundreds of other newspapers for 36 years and turned a backwoods-born Virginian into one of America’s most celebrated writers, died on Monday at his home in Leesburg, Va. He was 93.

The cause was complications of a fall, his son Allen said.

Mr. Baker, along with the syndicated columnist Art Buchwald (who died in 2007), was one of the best-known newspaper humorists of his time, and The Washington Post ranked his best-selling autobiography, “Growing Up,” with the most enduring recollections of American boyhood — those of James Thurber, H. L. Mencken, and Mark Twain….

Starting in 1962, he became a columnist for The Times and its news service, eventually composing nearly 5,000 “Observer” commentaries — 3.7 million insightful words on the news of the day — often laced with invented characters and dialogue, on an array of subjects including dreaded Christmas fruitcake and women’s shoulder pads. The columns, which generated a devoted following, critical acclaim and the 1979 Pulitzer for distinguished commentary, ended with his retirement in 1998.

To a generation of television watchers, he was also a familiar face as the host of “Masterpiece Theater” on PBS from 1993 to 2004, having succeeded Alistair Cooke….

As the host of “Masterpiece Theater,” Mr. Baker once did a riff on snooty British clubs and recalled that Art Buchwald had invited him to join a club he was starting, the American Academy of Humor Columnists.

“To keep other people out,” his colleague replied.