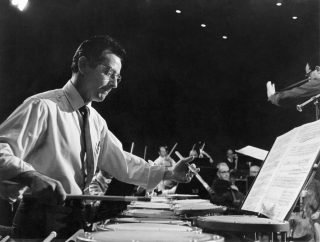 I was saddened to read that Michael Colgrass, the brilliant composer who was the focus of the first program in the 1970s WGBH “Soundings” series, has just died.

Soundings was produced by Bunny Olenick and directed by Fred Barzyk. Each program in the series consisted of a character-driven documentary segment and a studio performance segment — all focused on  the work of chosen composers of “new music”.

Colgrass was the first in the series but we covered established composing stars like Lukas Foss, Joan Tower, and Ralph Shapey, among others.I’ll never forget when Fred Barzyk asked me to edit that first, very challenging documentary about Colgrass and the studio performance of his work.  In the studio Fred recorded each instrument separately and it was a big challenge to synch them up on the then state-of-the-art 3/4 equipment.

In the documentary segment, filmed in Colgrass’s home in Toronto and in his classroom Colgrass stood in front of a blackboard and instructed his students to make a visual representation of their individually uttered sounds ‘“beep, vroooom, yeeeek” etc  —  then he led them as a group to sing and blend each sound. This was his way of teaching composition!

The other important memory is that first program allowed me to work with Bunny Olenick, along with Fred and Olivia Tappan and Al Potter — powerful mentors and creative forces.  And the series continued into about thirteen programs and represented the kind of in-house produced programming that became a trademark of WGBH.

Michael Colgrass, a composer of vivid, genre-crossing orchestral and chamber works who won the Pulitzer Prize in 1978 for “Déjà Vu,” a concerto for percussion quartet and orchestra, died on July 2 in Toronto. He was 87.

His wife, Ulla Colgrass, said the cause was squamous cell carcinoma, a form of skin cancer.

Mr. Colgrass refused to align himself exclusively with any of the warring postwar new-music styles. He found his own path by drawing on whatever styles and techniques suited the composition on his desk.

He used 12-tone and serial techniques alongside soaring lyricism. The rhythms, timbres and energy of jazz — his earliest musical passion — are heard in several works, including “Déjà Vu,” in which jazz-tinged brass figures seem to arise from the colorful percussion writing and take on lives of their own amid slow-moving, atmospheric string scoring.

Elsewhere — for example in “Folklines: A Counterpoint of Musics for String Quartet” (1988) — Mr. Colgrass borrowed from disparate world music styles. And in some works, like “Letter to Mozart,” he used quotations from composers of the past, transforming them with modernist techniques…

Mr. Colgrass usually built his scores on imaginative and often whimsical ideas, rather than standard structural models. His early work “As Quiet As” (1966), an orchestral score that the Boston Symphony Orchestra recorded, was based on a newspaper article in which children were asked to complete the phrase “as quiet as a … ” Mr. Colgrass chose seven responses and characterized them instrumentally in the work’s seven movements…

Mr. Colgrass’s inventiveness and wry humor were not confined to his compositions. Writing for The New York Times in 1972, he described a visit to a junior high school in Fort Wayne, Ind. He had been invited to speak about being a composer, but he saw immediately that he was facing a difficult crowd.

“I went out on the floor and stood there a moment looking at the students,” he wrote. “Then I undressed and stood on my head. There was a wave of murmuring, and the room got very quiet. I somersaulted, fell onto one shoulder, rolled to the other, raised my body on my forearms and shook my feet in the air, twisted, stretched and arched like a cat and collapsed motionless on the floor.”

When he finished, he told the students: “Your body is the first musical instrument ever invented. Like any instrument, it has to be tuned. That’s what I just did, and I’m going to show you how to do it.”