Few materials relating to Beverlee’s Clipper Ship or the Make-Believe Clubhouse have survived the intervening 60 years since those series were broadcast.

The 1961 fire consumed almost the entire of WGBH, pretty much sealing that fate. We didn’t have videotape the year of Clipper Ship – 1959. We did during Clubhouse – 1960, but it was very new and used only sparingly for big budget productions. We employed it on Clubhouse for a short, prerecorded opening sequence, not, as I recall, for the body of the show. So, the Clubhouse has no video record to refer to.

Just recently, I was hugely surprised to receive photos and some press clippings from Patrick Dilley, Ph.D. of Southern Illinois University, Carbondale. He is writing a paper on Beverlee McKinsey, who hosted the show, and who later went on to a greatly successful career in daytime television drama. She was later to become known in the business as “Queen of the Soaps.” 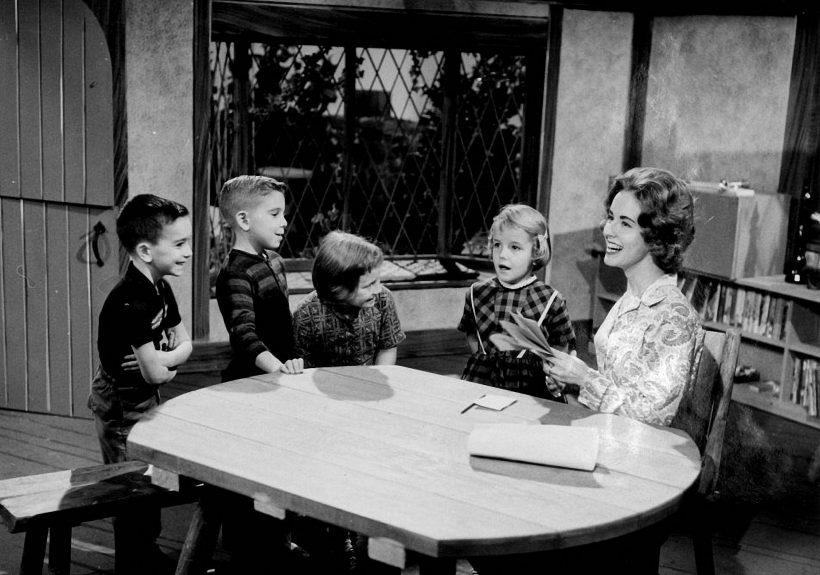 Historically, The Make-Believe Clubhouse was one of my first producing/directing projects. I conceived it the year after the director/producer of Beverlee’s Clipper Ship left the staff, and the managerial level of the station decided a new format was in order (that was in 1959/60). I had been a camera operator on the Clipper Ship and got to know Beverlee then. On Clipper Ship, she was new to television but she was obviously quite smart, not at all overbearing, and very easy to work with.

Some background on the Clubhouse

The station had not done — as was so common in commercial broadcasting — late afternoon shows for kids, like Howdy Doody and Bozo the Clown. The commercial offerings were, of course, intended to sell merchandise. Other educational stations had produced afternoon programs like Mr. Rogers, Captain Kangaroo, and Sesame Street (which were selling, instead, socialization, learning and insight). WGBH came a little late to that field.

The first season of WGBH’s afternoon children’s offerings was entitled Ruth Ann’s Camp, and was hosted by Ruth Ann Flaherty. The program was live, an hour long, Monday through Friday, and included about six or eight guest children each week. “Miss Ruth Ann” (as she was called on-air) did well at creating a fun and educational atmosphere. 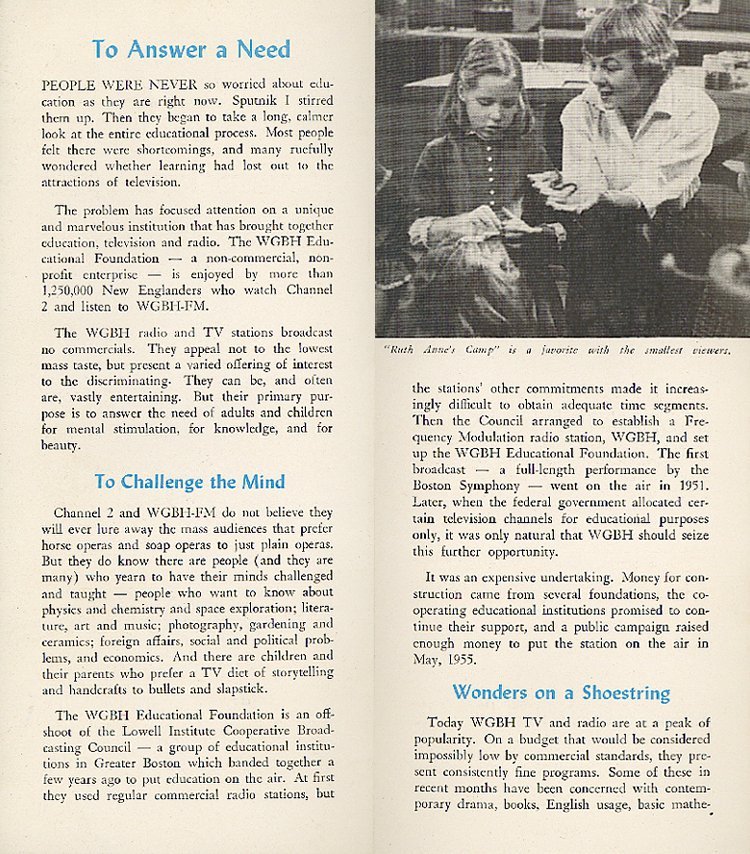 After a couple of years Ruth Ann ended her tenure, and the program was re-conceived by a new director as Beverlee’s Clipper Ship. This program was also live, an hour long, with guest children – and this is where Beverlee McKinsey, a newcomer to television production, made her debut. The show was, for a TV newbie, a relatively complex and demanding format but, besides having had some teaching experience, Beverlee was a bright penny and a fast learner. She brought a new, welcomed warmth and fun-loving feel to the time slot. 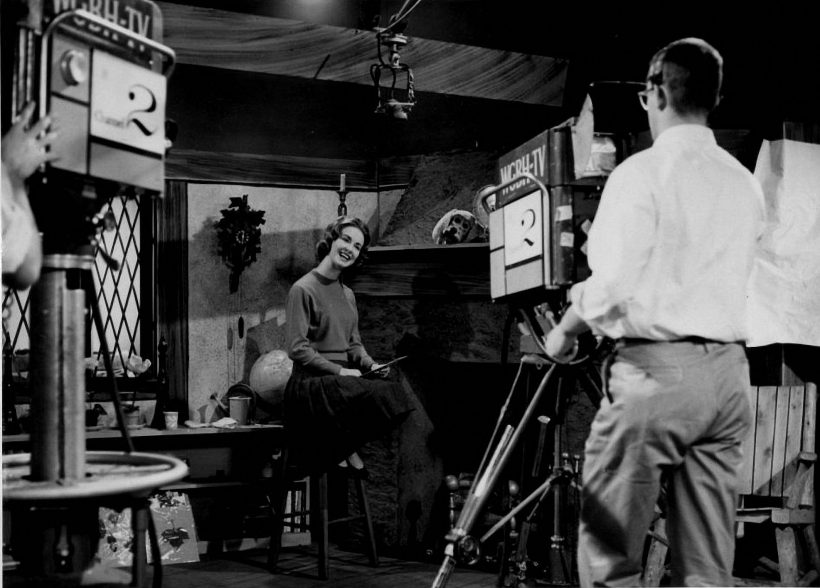 The next year, I was assigned the show, and its redesign. I decided I wanted a warmer, cozier, more intimate feel. Beverlee agreed, and during many planning sessions we fleshed out the project together. We reduced the show to half an hour, 5 days a week, and included only 4 children (ages 6 to 8) each day, making it much more manageable than the previous efforts. 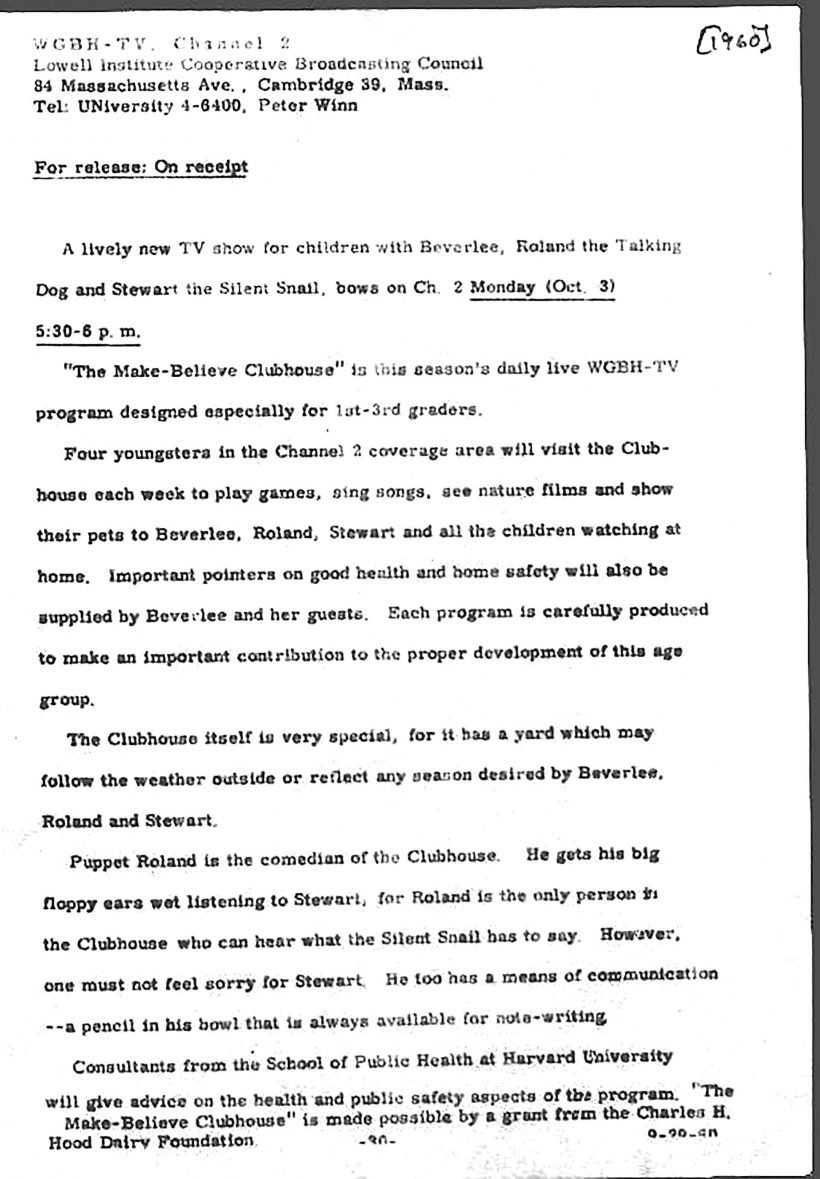 The set was envisioned as the interior and exterior of a Disney-esque Tudor home. We made efforts in the design to liberate Beverlee from as many technical challenges as possible, allowing her to demonstrate her abundant warmth and fun loving qualities.

We had, for instance, included a fireplace with a mantelpiece at Beverlee’s shoulder height where puppets appeared, and she could stand or sit on a tall stool comfortably and converse with them. For this activity, we instituted fun puppet characters (Roland the Talking Dog, his close friend Stuart the Silent Snail and a crow — who’s name I can’t recall — who lived in a tree next to the swings in the exterior set area). Beverlee proved excellent at largely unscripted and charming conversations with them (who were all played by wonderfully inventive puppeteer Ed Titus).

We built a bay window with a window seat for the book reading segments. There, Beverlee could hold the book so she could read it easily, the kids seated to her sides could follow along, and a camera could shoot close-ups of the pages clearly over her shoulder through the window to her right. 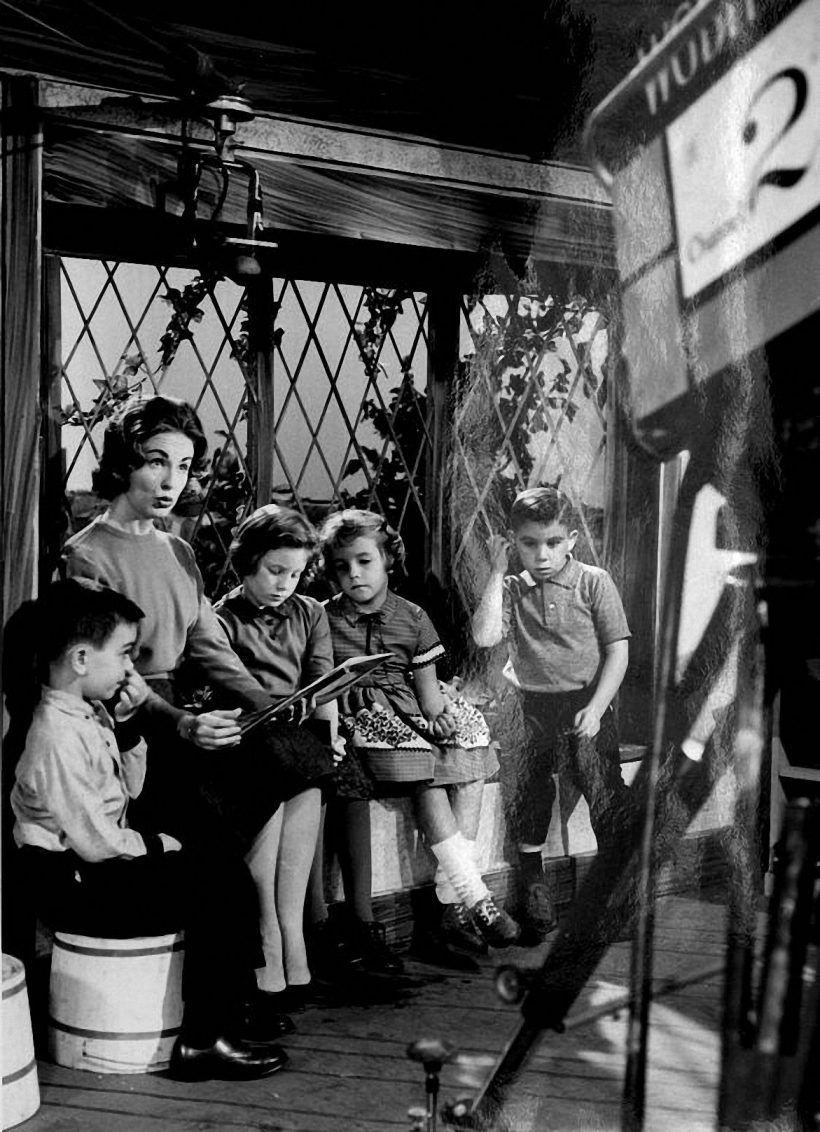 We showed short, children’s films on occasion, had the customary art and craft periods, and had light instructional segments (like how and when to brush one’s teeth).

Largely, we made it up as we went along, the show’s scripting consisting, very generously speaking, of scribbled outlines. 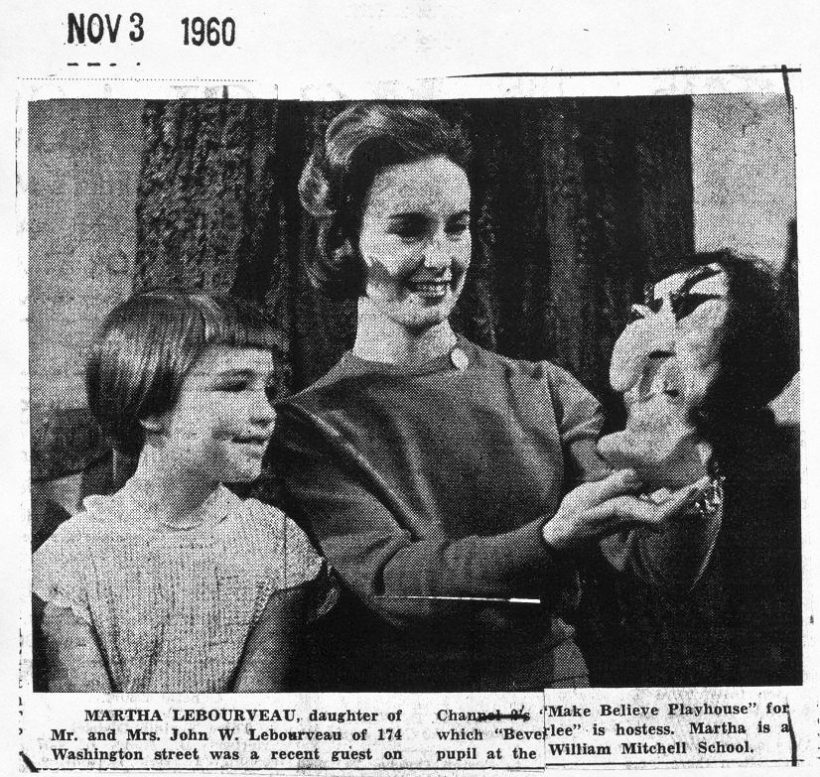 The program’s prospectus suggested that there was supposed to be an assembled advisory panel of Harvard educators, and others from institutions making up The Lowell Institute Cooperative Broadcasting Council. I can’t recall who might have made up that collective, nor ever meeting with any of them. I do vaguely remember seeing a few pages of written critique and suggestion material from that quarter, but the ideas seemed pretty theoretical, pedantic and largely irrelevant to the spirit of what we were trying to do. So we just forged ahead as our instincts dictated. 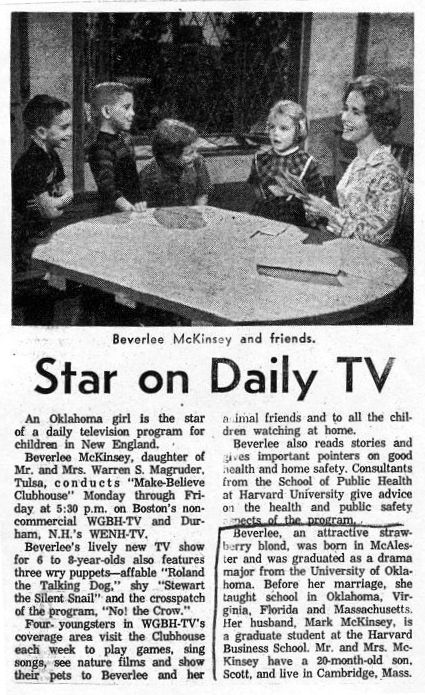 We did “run mildly afoul” of one “outside expert adviser.” This disappointing encounter was by way of a phone call with a supposed authority on children’s programming from the CBC in Canada. Our assistant general manager for television had suggested very strongly that I consult with him for guidance. We had already been on the air for a couple of weeks, and our “cast” and routines were already in place. He asked me to explain what we were up to, which I did, and he listened, seemingly somewhat unimpressed, but basically OK with it all — until I got to the puppets … most particularly Roland and Stuart.

The expert bolted when I explained about “silent” Stuart. His response was, to say the least, insistently disparaging. He seemed incapable of getting the relevance of the lovely and charming relationship between the dog and the snail, Roland being the only “person” who could hear and understand what Stuart was trying to impart, and spoke for him.

That relationship, which I found touching — as did just about everyone else — referred at subtler levels to listening carefully and caringly to one another; translating for each other; one friend picking up the slack for another who seemingly functioned at a disadvantage; and that there could be wisdom emanating from one who appeared, by conventional standards, impaired. This, unique, “expert” encounter proved memorable only for it’s non-memorable-ness.

Around the middle of that season, the Charles Hood Dairy Foundation, which had been supporting WGBH’s children’s programming by this time for 6 years (starting with Ruth Ann’s Camp), decided to put their charitable funds elsewhere. I don’t know if the station actually did an exhaustive search for further sponsorship, but we were told this season would be the last. We had all come to love doing the show, and over that year Beverlee and I became fairly close friends. I could see then that she had an appreciable amount going for her as a performer, but it didn’t, of course, occur to me that she would eventually become “queen of the soaps.”

And beyond the end

The last contact Beverlee and I had was purely accidental. In about 1966, we ran into each other on the street one afternoon as I was coming out of a taping of The Merv Griffin Show. We were quite happy to see each other, and did some quick updating, in which she told me she was doing quite well in soaps. I was not a fan of that genre, but I was pleased for her, and impressed with her success. She was supporting herself as a professional actress, and I could see she was deeply proud of that.

The Make-Believe Clubhouse seems, on reflection, to have been a magical experience for many of us. It was for me. The aforementioned Patrick Dilley recently interviewed one of the children who guested on the show at about aged 7. Apparently it felt – and still feels – magical to this man as well.

One final note: Scott McKinsey (Beverlee’s son), according to Patrick, is a television director on Days of Our Lives at NBC, and General Hospital at ABC. The circle is unbroken.

These photos (by Barbara Marshall) and press clips were unearthed and sent to me by Patrick, for which I will be ever grateful.