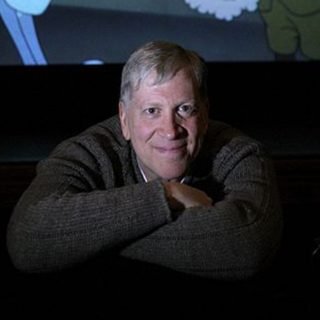 A Senior Editor for THE WORLD (1997-2011), Ken passed away Sat, 8/24, following complications from pancreatic cancer. He leaves behind his partner of 27 years, Lisa Mullins, former host of THE WORLD, with whom he shared his remaining time taking road trips, going to concerts and Red Sox games, and connecting with loved ones near and far.

Ken’s friends and colleagues are invited to come together to remember him this Sun, 9/22 at Simmons University, (300 Fenway, Linda Paresky Conference Center, third floor, main college building) at 11am (doors open at 10:30am).

Stephen Snyder, Senior Producer for THE WORLD, says, “The memorial will be a great way for all of Ken’s friends to hold him in our hearts together.”

To understand Ken Bader’s approach to his life working in public radio and cultivating endless friendships, you could begin with Bugs Bunny.

A devotee of the annual Brattle Theatre film festival devoted to the cartoon rabbit, he saw in Bugs a character who knew how to focus on the essentials, and do so with a smile.

“What does he want out of life? He wants carrots. And he wants to be left alone,” Mr. Bader told the Globe a decade ago. “The humor is quite sophisticated,” he added. “It’s hysterical. I’m sure a lot of it goes over kids’ heads.”

A longtime editor, producer, and writer for public radio programs and stations including The World, WBUR, and Monitor Radio, Mr. Bader died Aug. 24 of complications from pancreatic cancer. He was 70 and had lived for many years in North Cambridge.

He found entertainment and ample wisdom in so many old movies that he created an organization to pick what to see next — though he conceded he was the president and sole member of what he dubbed the Classic Movie of the Week Club.

Mr. Bader was also a serious journalist who would take a stand, even if it meant parting ways with a job.

“He was a profoundly principled and ethical person,” said his brother Jeffrey Bader, a former senior Asia adviser to President Obama, and a former US ambassador to Namibia.

“Both our parents were lawyers,” Jeffrey added. “They were, I would say, extremely ethical and principled people. My father set an example in life and you absorbed it. And Ken fully absorbed it.”

In 1993, Mr. Bader made news himself, when he and a couple of WBUR colleagues traveled to Albania to train reporters how to cover the country’s emerging democracy. They needed a translator and found a top-notch candidate in the home of the family with whom they were staying.

Emira Gjata was 11 and intelligent beyond her years. Upon finishing her translator duties, she traveled with the WBUR staff back to the United States, where Mr. Bader was her legal guardian for four years, until her parents secured green cards to come to Greater Boston — a journey later recounted in a 2007 Globe feature.

In the meantime, Mr. Bader encouraged her to apply to Noble and Greenough in Dedham, where she earned a scholarship and boarded during the week. She went on to graduate from Harvard University. Along with her parents, one of her sisters emigrated from Albania, as did extended family and many friends — a vast number of lives bettered, Gjata said, because Mr. Bader offered assistance.

Gjata added that his influence has continued through the example he set.

“What a great role model for me to be around,” she said. “His sense of morality is something I took away very early on, and it will remain with me. It was unwavering. If something was right, it was right, and he was going to stick with it always.”

The youngest of three brothers, Mr. Bader was born in New York City and grew up on Long Island, in Hewlett, N.Y., a son of Samuel Bader and Grace Rosenblum.

“He was always very gentle,” his brother Jeffrey said. “He was a warm, caring, gentle child all along.”

Early on, Mr. Bader became fascinated by music, accumulating “one of the world’s largest 45 collections, I suspect,” his brother said. “That led somewhat naturally to his interest in radio.”

Mr. Bader graduated from George W. Hewlett High School, and his mother was a pioneering woman as president of the district’s Board of Education. He went on to graduate with a bachelor’s degree from Colgate University in Hamilton, N.Y., and a master’s in educational media from the University of Iowa.

His radio career also took him to the University of Wyoming, where he taught production and was program director at the college’s station. He then spent more than a decade as a writer, editor, and producer for Voice of America and National Public Radio.

Mr. Bader drew news coverage during his departures from Monitor Radio (he declined to participate in an apology Monitor Radio broadcast after a report about AIDS prevention that management found too graphic) and WBUR (a leave-taking due in part to him correcting the grammar in the underwriters’ tagline without approval).

During his Boston radio years, he met Lisa Mullins, who is now an anchor of WBUR’s “All Things Considered” and a guest host of NPR’s “Here and Now.”

In media, where the editor-reporter relationship can sometimes be heated, Mr. Bader “was a major collaborator,” she said. “You think of the red pen of an editor. Ken used a pencil and eraser. He felt like his word should not be the last word, unless it was a matter of basic facts or clarity or ethics. He just wanted to tell a good story.”

Among the best stories in Boston’s public radio newsrooms were those Mr. Bader engendered through his creativity.

He held an annual barbecue at which he prided himself on predicting the exact number of hamburgers and buns needed. And he designed the gathering’s soundtrack to feature an in memoriam of artists who had died the previous year.

Mr. Bader also met with friends regularly at Frank’s Steak House in Cambridge. “They called themselves the ‘manly men,’ and they said that with a big smirk because they were all from public radio,” Mullins said.

“He never saw himself as a galvanizer, but he made these human connections,” she added. “He did it all his life.”

Although Mr. Bader worked in media, “he didn’t think the progress of technology added anything to his life,” his brother Jeffrey said.

Mr. Bader used a rotary phone longer than anyone he knew, kept a pinball machine in his home, and filled every available space on countless postcards he mailed to friends and family.

And when his youngest niece, Lexy, graduated from college, he “showed up with this beautifully wrapped gift,” she recalled.

“Ken explained that it was the Bader family heirloom toaster. It has a cloth cord,” she said. “I think of it as the most beautifully quirky Ken gift. You don’t need anything from the modern era. You need this toaster that worked in 1953 and still works in 2019.”

In addition to Mullins, his brother, and his niece, Mr. Bader leaves another brother, Larry of Cary, N.C.

Family and friends will gather to celebrate his life and career at 10:30 a.m. Sunday in the Linda K. Paresky center at Simmons University.

Among family and friends, and even in the sometimes contentious media world, Mr. Bader “held no grudges. That wasn’t his nature,” Jeffrey said.

“There was just a pure quality to him,” he added. “Ken did not know how to take advantage of anyone or do anything at anyone else’s expense.”