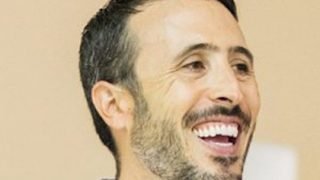 The WGBH community notes with sadness the passing of Moses Shumow, who worked here between 2001 and 2004, first as a Production Assistant for AMERICAN EXPERIENCE then as Associate Producer for our Lifestyle Unit (now part of WGBH Studio Six). Moses died tragicallyon Tues, 10/22 after being struck by a Commuter Rail train in Beverly. He was 42.

While at WGBH, Moses met his wife, Rose Compagine Shumow, who also worked for AMERICAN EXPERIENCE. According to a statement from Emerson College, Moses was a 2001 graduate of Emerson College’s MA in Broadcast Journalism program and earlier this fall joined the college’s Journalism faculty.

“When I first met Moses in 2001, he was a motivated, hard-working production assistant eager to be part of the public media family,” says AMERICAN EXPERIENCE Series Producer Vanessa Ruiz. “He stood out for so many reasons, most important of which are how kind, loving, and intelligent he was. He was highly respected for his work in storytelling and digital media, and loved very much by his family and friends. We will miss his big smile and warm heart tremendously.”

The family has set up a GoFundMe page to raise money for Rose’s continued care of their three children, especially Gus (9), who recently became disabled.

Excerpts from The Boston Globe