Excerpts from story at WGBH.org

Gershon Kingsley, the composer of the iconic WGBH sting, the electronic fanfare that accompanies the WGBH logo during programs’ closing credits, died earlier this month at the age of 97.

With its synthesizer crescendo, the sting has changed very little since it sizzled across the airwaves for the first time almost 50 years ago.

Kingsley, an up-and-coming musician who elevated the Moog synthesizer to almost cult status during the 1970s, developed the sting in conjunction with two WGBH employees: WGBH’s director of creative services and the general manager. It happened in secret, and the story of its development was almost lost to history.

“No other staffers were consulted or involved,” says Winkler, now professor emeritus at University of Massachusetts, Dartmouth.

“In all the executive meetings I attended, there was never a mention,” he says. “I remember no referencing of the project, but that was not uncommon, because of the keen competition between producers.” …

The story reported that Creative Director Sylvia Davis, who developed the sting with General Manager Michael Rice, described WGBH’s work culture this way: “People are able to shape themselves here. There is a respect for eccentricity here that encourages people like Julia Child to develop.” Davis also credits Rice for being “supportive when you’re leaping into a void—and when you are highly competitive, as we are, that’s a major asset.”

The pair “always worked closely together and were very close dinner friends, at which they developed their ideas,” says Winkler. “They balanced each other out.”

He recalls Davis as being “steeped in advertising culture” and exuding a Carol Burnett kind of vibe. Rice was “more cultured and refined.”

“This audio sting is recognized as WGBH’s promise of quality programming,” says Jon Abbott, president and CEO of WGBH. “Kingsley and our designers were ahead of their time in understanding viewers’ appetite for something as innovative and exciting as electronic music.”

Upon release the sting spawned a passionate following. Featuring an almost surreal synthesizer riff, it has earned nicknames (“the doodle doo”) as well as hundreds of online video homages and lively internet discussions (like this Reddit thread).

The contract with WGBH came as Kingsley was building his electronic music career with the Moog. He created concertos, movie soundtracks, advertising jingles and a rock version of Jewish Sabbath services, according to his obituary in The New York Times. Kingsley eventually received worldwide recognition. His music continues to wield influence, including with such hip-hop artists as Jay-Z, J Dilla, Black Milk and RJD2, who have sampled his works, according to Rolling Stone…

“It’s a tribute to Kingsley’s musical vision that the sting has lasted so long and has resonated with listeners for almost five decades,” says Abbott.

Gershon Kingsley, a composer who brought electronic sounds into popular music and wrote the enduring instrumental hit “Pop Corn,” died on Dec. 10 at his home in Manhattan. He was 97.

Mr. Kingsley was an early convert to the Moog synthesizer in the 1960s. He used it to create music for commercials and to orchestrate perky melodies — most notably “Pop Corn,” an instrumental originally released on Mr. Kingsley’s 1969 album “Music to Moog By.” It became a best seller and was remade (usually renamed “Popcorn”) in hundreds of versions: by Kraftwerk, Herb Alpert & the Tijuana Brass, Aphex Twin and the Muppets, among others. 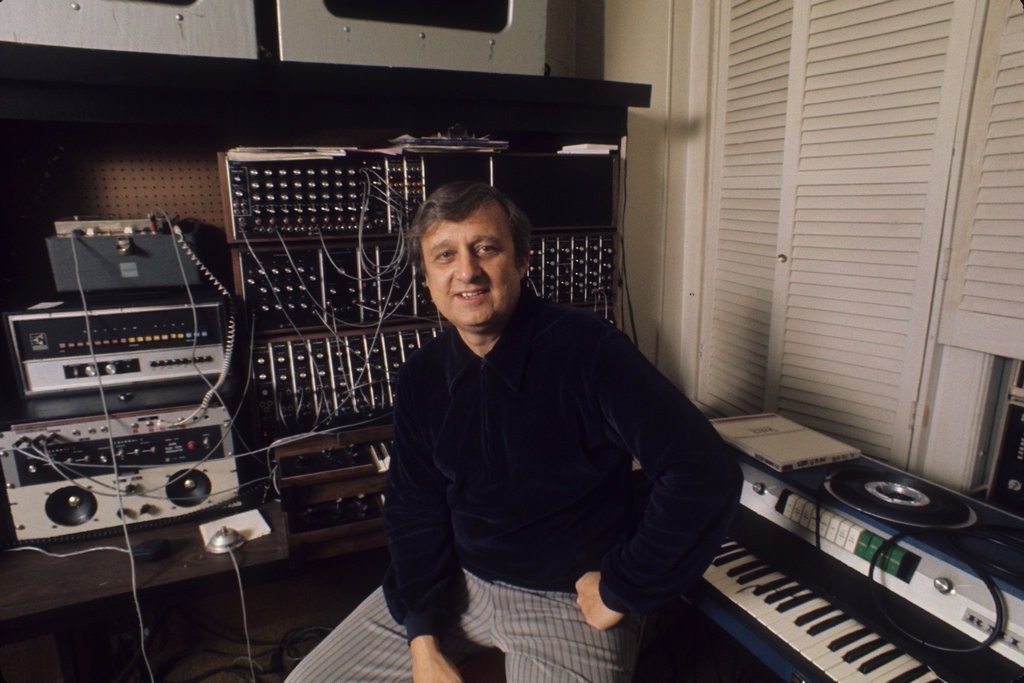 Mr. Kingsley at his home studio in an undated photo. An early convert to the Moog synthesizer, he wrote a concerto for four Moogs as well as musicals, operas, oratorios, cantatas, movie soundtracks and a rock version of Jewish Sabbath services. Credit: via Kingsley family

A 1972 version of “Popcorn” by Hot Butter made the song an international hit, and a 2005 remake for the animated character Crazy Frog became a major hit in Europe.

In a prolific career, Mr. Kingsley wrote a concerto for four Moogs, as well as musicals, operas, oratorios, cantatas, movie soundtracks and a rock version of Jewish Sabbath services. His music was also heard widely without his name attached. His racing seven-second synthesizer crescendo has accompanied the logo of the Boston public television station WGBH since 1971.

Thanks so much for your help in preparing this story. It was fascinating to learn some of the back story. I’m still hoping to discover how Kingsley and WGBH connected.

The first use of the sting was accompanied by a simple blue and yellow zoom out, zoom out animation designed by Dietmar, I assume.

When I got there in the fall of 73 the station had just had a new institutional branding set designed by Chermayeff and Geismar in NY featuring the double drop-shadow treatment. It was because of the new logo that I was asked to make a new on air motion version to go with the Kingsley track. That happened in 1974, with the help of Gene Mackles, another designer at the station, who had been there during Dietmar’s time.