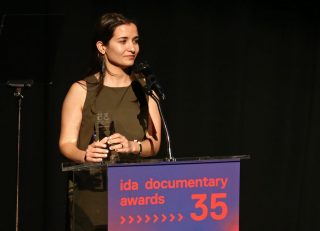 Amid the outcry that women were shut out of the best director Oscar nominations, one female director whose film earned a nod has a Boston connection.

“For Sama,” a much-hailed festival circuit film by Waad Al-Kateab, was nominated Monday for an Academy Award for best documentary feature.

Produced by PBS’s documentary series “Frontline,” out of WGBH in Boston, the film is “basically a love letter” from Al-Kateab to her little daughter Sama, said Raney Aronson-Rath, executive producer of “Frontline.”

Directed by Al-Kateab and London-based Edward Watts, the documentary offers a rare first-person account of the Syrian conflict.

“For Sama” is now available for streaming on pbs.org and on the PBS app.