I am very sad to inform you that our dear friend Herb Bloom passed away over the weekend.

I first met Herb in 1963 when I was hired at WGBH-TV to work with him on producing public affairs programs. We remained colleagues and good friends for these many years. While Herb still lived in the Boston area, we were in a book club together and Elliott delivered his daughter Amy. When he moved to NYC to work for David Suskind and lived in The Village and then to DC with NBC news, we remained in close touch.

For the past 20 years, Herb served on the Board of our National Center for Jewish Film so we met intermittently and were in frequent contact. We will miss Herb greatly and deeply saddened by this loss. 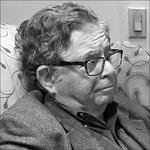 Herb Bloom was a self-described “Boy from the Bronx,” who loved riding horses and collecting Southwestern art.

After graduating from Stuyvesant High and Yeshiva University, he earned a Danforth scholarship and a free trip to New Haven, Connecticut. With a diploma from Yale in-hand, Herb took his eagerness for knowledge to the world of television news.

After stints in Boston, Jersey, and Pittsburgh, he settled into a job in Washington where he spent most of his successful career at NBC. As executive producer, he didn’t so much cover the news, rather he choreographed the people who made it reach our living rooms.

Innovative and inquisitive, to say the least, Herb did everything that he could to get the story, which explains why, even long after retiring, he eagerly conducted six-hour interviews of whoever happened to be seated in the middle seat on his biannual trips from DC to San Diego.

In his final act, he changed his name to Grampy Herb, where he shined in his new favorite hobby, grandparenting. On May 2, 2020, this beloved husband, father, grandfather, friend, newsman and Bronx Cowboy passed away.