A Ron Gill performance was always an emotional affair. 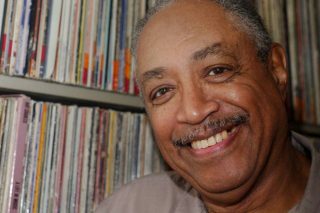 “When Ron sang, he looked his audience squarely in the face and sang directly from his heart,” recalls John Stein, who played guitar in Gill’s band for 20 years. “He found the right songs and inhabited them fully.”

Friends, colleagues, and fellow musicians remember Gill’s jazz singing as all-heart, just like his personality. Gill, a legend in the Boston jazz scene and radio host at WGBH for 20 years, died at age 85 on April 16 in Charlotte, N.C.

“Ron’s was always a warm and welcome voice in our jazz programming,” recalls Marita Rivero, a former radio and TV general manager at WGBH. “He brought us perspective both as a performer and as a critical listener. His memory brings a smile to my face.”

Gill, who joined WGBH Radio as a host of The Jazz Gallery in 1989, was “a favorite with our audience,” recalls Henry Becton, former president of WGBH. “He was a real asset to our jazz programming.”

Gill grew up in New York City in the 1940s in a house that was suffused in the music of Billie Holliday, Count Basie, and Benny Goodman. His aunt, an aspiring vocalist, took him when he was just a boy to see live performances at the Apollo Theater and the Capital Theater.

The family moved to Boston, and he discovered his own special voice when he sang in the Christmas show at Boston Technical High School.

“There was such a positive reaction after I did this, that I realized right then and there, that I had something — that I could move an audience with my performance,” he said in a 2005 interview with Berklee College of Music’s oral history project.

He started to sing more and to write songs, with “Surrender Your Heart” being his first song to be performed, by the Love Notes, his friends’ band.

Gill went on to be part of the Boston jazz scene for more than thirty years, performing in concerts and on radio, television and variety shows. He was associated with The Manny Williams Trio, and in the mid-1970’s, he toured New England with the Duke Ellington Orchestra. He appeared on WGBH’s Basic Black several times, as well as on that show’s forerunner Say Brother, where he sang in 1969 a soulful rendition of “Brother Where Are You?”

“I don’t really think that people should spend their lives trying to be a star,” he said in the Berklee interview. “The most important thing to do is play, man, sing.”

He devoted decades to researching and resurfacing the songs of Billy Strayhorn, whom he had discovered via friends at the New England Conservatory.

“I… appreciated the instrumentals and recordings that [Strayhorn] and Duke [Ellington] composed and recorded, and I was playing them on my radio show at WGBH,” Gill wrote in his blog.

“I was determined to search and find Billy’s material, and it was not easy. There were few recordings of his music… and I took on the search with a vengeance, talking with all the people I knew and doing… much reading.”

He ultimately performed a concert of Strayhorn’s songs at the WGBH studio and eventually recorded the Ron Gill Sings the Songs of Billy Strayhorn LP there. In 2015, he sang those pieces at a 100th-anniversary commemoration of the birth of Strayhorn.

“My brother was a champion of the Boston jazz community,” says Collins. “He made his voice heard on stage and off.”

Gill also passed along his love of jazz to his grandson, Deion Gill, who has toured with Lil Wayne and Austin Mahone. On Twitter, Gill called his grandfather his “musical hero and the reason the passion for music runs through my veins.”

Gill’s voice was “beautiful and warm, just like his personality,” recalls WGBH’s Eric Jackson of Eric in the Evening. “He had a wonderful smile and laugh. He was the kind of person people just liked.”

“Ron really enjoyed working at WGBH because the environment allowed creativity in the presentation of jazz,” says Jackson.

Gill would devote entire radio shows to specific artists so that the listener could understand the depth of the performers’ skill and artistry.

“Ron’s talent both as a musician as well as a broadcaster is a wonderful combination to possess when sharing such a significant art form,” says Phil Redo, general manager for radio and local news at WGBH. “WGBH was lucky to have him with us for so long.”

A memorial service will be held in Boston at a later date.