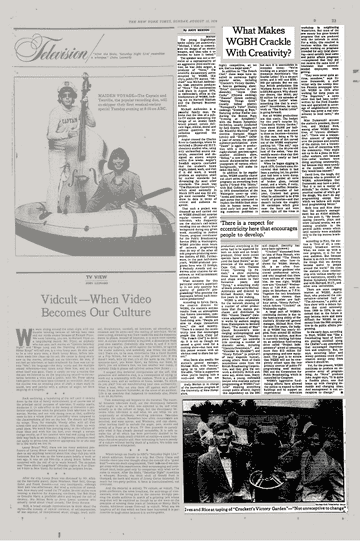 The young Englishman spoke calmly yet assertively: “Michael, I wish to commission the design of an atomic weapon, and then take it to Sweden to have it tested.”

The speaker was not a terrorist or a representative of an aggressive third‐world nation; he was John Angier, a producer of “Nova,” the scientific documentary series mounted by WGBH, this city’s public‐TV station. “Michael” was Michael Ambrosino, then executive producer of “Nova.” The conversation took place in August 1974, in Ambrosino’s office at the headquarters of WGBH, looking out on Harvard Stadium and the Harvard Business School.

Michael Ambrosino is a peaceful family man. He knew that the idea of a public‐TV station sponsoring the design of an atomic bomb would present certain delicate legal, ethical, moral and political questions. He nonetheless approved the project.

Angier crossed the Charles River to Cambridge, where he recruited a 20‐year‐old M.I.T. chemistry student who, using only unclassified source materials, researched and designed an atomic weapon within five weeks. Angier’s Swedish experts concluded that the student’s bomb might, indeed, work, and that if it did work, it would produce an explosion small by nuclear standards but devastating iby most other standards. The result was “The Plutonium Connection,” which aired nationally in March 1975 and was the single most successful “Nova” show to date in terms of critical and audience response.

That such a project was dreamed up and carried out at WGBH should not surprise regular viewers of public television, who frequently see the station’s call‐letters receding into an electric blue background during any given week. According to Anders Yocom, program coordinator for the Public Broadcasting Service (PBS) in Washington, WGBH provides more hours of network programming than do any of the other 40 odd program‐producing member stations of PBS. Furthermore, in the past half‐dozen years, WGBH‐produced programs have won 12 Emmys, 3 Peabody Awards and numerous other citations for excellence, as well as consistent critical acclaim.

What accounts for this particular station’s superiority in not only quantity but quality of public‐TV programming? Who provides the inspiration behind such innovative productions?

According to Sylvia Davis, the creative director for WGBH, the station’s success results from an atmosphere that fosters innovation, combined with an ambitious fund‐rising arm. “People are able to shape themselves here,” she said recently. “There is a respect for eccentricity here that encourages people like Julia Child [of “The French Chef”] to develop. It is not as though we sensed a great need for a cooking show—but here was this potent woman with an obvious need to share her talent.”

Miss Davis also credits the station’s general manager, Michael Rice, with “encouraging us to take chances.” She adds, “Mike is supportive when you’re leaping into a void—and when you are highly competitive, as we are, that’s a major asset.”

In addition to its regular series, WGBH steadily churns out short series and one‐shot programs on everything from sports (“Grand Prix Tennis,” with Bud Collins) to politics (a 1975 dramatization of the Watergate cover ‐ up trial). “Arabs and Israelis,” a seven-part series that attempted to explain the Middle East situation in human terms, was aired early last year following numerous problems in production; everything in the series had to be approved by both an Arab and an Israeli producer. Other more recent specials have included “Beyond the Sand Dunes,” an exploration of the ecology of Cape Cod, with Thalassa Cruso; “Growing Up Female,” a show exploring those forces that influence and shape women in their formative years; and “Dying,” a wrenching study of death, produced by Michael Ambrosino and directed by Michael Roamer, that was five years in the making.

WGBH is also responsible for the network showing of a number of other productions that the station purchases and distributes to PBS: “Classic Theater” (television adaptations of dramatic works by authors ranging from Shakespeare to Bernard Shaw); “The Ascent of Man” (Jacob Bronowski’s wideranging anthropological and historical survey); “Masterpiece Theater” (an umbrella title covering a number of dramatic series, including “Upstairs/Downstairs,” and “Shoulder to Shoulder”) and “Monty Python” (a potpourri of zany slapstick humor), among others. Most of these acquisitions come from the British Broadcasting Corporation, and they give the network a distinctly British and, some say, elitist tone. Henry Becton, a young, redheaded lawyer who oversees cultural programming at WGBH (“cultural” meaning everything except public affairs), regrets this dependancy on the BBC but says it is unavoidable in economic terms: “We’re working on a project now to dramatize Hawthorne’s ‘The Scarlet Letter.’ It’s a six‐part series, and it will cost $500,000 per episode. But we can buy British productions like ‘Madame Bovary’ for $15,000 to $30,000 apiece. Why should our donors, like Mobil, pay $3 million for six episodes of ‘The Scarlet Letter’ when something like that is available?” Nevertheless, he says, work on “The Scarlet Letter” is going forward.

Not all WGBH productions are that costly. The budget for this year’s surprise hit, “Crockett’s Victory Garden,” runs about $3,000 per halfhour show. And each show is done on location—location in this case, being a 75 by 75 foot square of dirt carved out of the WGBH employees’ parking lot. “The soil,” says Jim Crockett, the 60‐year‐old host of the series, “was the world’s worst—blue clay that had become nearly as hard as concrete.”

When he began digging in April 1975, Crockett soon discovered that before it had been a parking lot, his garden plot had been a town dump; cultivation yielded all sorts of broken glass, twisted metal, and a whole, if rusty, automobile muffler. Nonetheless, by November of last year, Crockett had grown what he estimated to be $700 worth of groceries—and that doesn’t include the roughly 30 cantalopes which grew near the fence and were stolen right off the vines in mid ‐ August. (Security has since been tightened.)

“Crockett” blossomed from an idea of Russ Morash, who had produced “The French Chef” and other how ‐ to shows for WGBH. Morash, 40, is an often frustrated amateur gardener who craved professional advice, and who imagined that there were millions of viewers like him. He was right. WGBH now airs “Crockett” Wednesdays at 7:30 P.M., with repeats on Saturdays at 7 P.M. Together the two broadcasts have more viewers than WGBH’s number one half-hour series, “Monty Python,” which follows “Crockett” on Wednesday nights.

A large part of WGBH’s continuing success is due to the fund‐raising ability of the station’s 32‐year‐old general manager, Michael Rice. Over the past five years, the budget at WGBH has nearly tripled, from around $5 million to over $14 million. And Rice is currently working full‐time on an ambitious fund‐raising drive called “Project Independence” aimed at amassing more than $12 million for programming and new equipment. The goal is to ensure that WGBH will not be completely reliant upon the two primary sources of public‐TV programming seed monies: PBS and the Corporation for Public Broadcasting, which is controlled by Congress.

WGBH’s aggressive fundraising efforts have allowed the station to expand to three buildings and to support an experimental television workshop in neighboring Watertown. But most of the new money has gone toward programs that are produced with the network in mind. For a while, this resulted in tensions within the station: people working on programs intended for only local showing—most notably local news and public affairs programs —complained that they did not receive the same kind of treatment that networkminded employees were getting.

“They were never quite serious, somehow,” says Dianne Dumanoski, a staff writer with the weekly Boston Phoenix newspaper who left WGBH in 1974 after working for three years on “The Reporters,” a news show that had been underwritten by the Ford Foundation and specialized in coverage of neighborhood events. “There was never a real commitment to local news,” she says.

Miss Dumanoski accuses the station’s president, David Ives, and Michael Rice, among other WGBH executives, of “chronic dilettantism”: “There was a tremendous amount of agonizing over the purpose and mission of the station, but a tremendous lack of connection with the community. They might ask us to do a piece on blue-collar workers, not because blue-collar workers were doing anything newsworthy, but because they were trendy at the moment. And then they would lose interest.”

David Ives, the tough, dry Brahmin who is president of WGBH, acknowledges that Dumanoski may have a point. “But it is not a matter of attitude,” he claims. “It’s a practical matter of who’s got the dough. We don’t do any programming except that which we believe will make local programming better.”

Both Ives and Rice deny that the station’s management has an elitist attitude. As Ives puts it, “By broadcasting concerts, plays and other cultural events, we are making available to the general public events which until recently were available only to the top income brackets.”

According to Rice, the station is “first of all, a community broadcast service. When we come up with a new program, it is for our own audience. But because Boston is so rich in resources, the things that we develop become useful to people around the world.” He cites the station’s close relationship with various nearby cultural institutions, notably the Boston Symphony Orchestra, and with Harvard, M.I.T., and other area universities.

There are some nagging worries at WGBH. Austin Hoyt, who produced the conservative-oriented half of “The Advocates,” a public affairs show with a debate format that aired nationally from 1969 to 1974, is concerned that in the future it may become more and more difficult for WGBH to pry money from the PBS cooperative to do public affairs programing.

In the early days, according to Hoyt, WGBH was “like a freewheeling band of brothers playing stickball along the Charles”—an atmosphere that encouraged improvisation and creativity. But, he says, mounting labor and money problems could divert creative energy away from where it should be.

Yet, for the present, WGBH continues to produce an impressive array of programming. As “Nova” producer John Angier says, “It is quite a flexible place, one that keeps up with changing demands and changing ideas. And management is not unreceptive to change.”

Andy Merton is in charge of the journalism program at the University of New Hampshire.