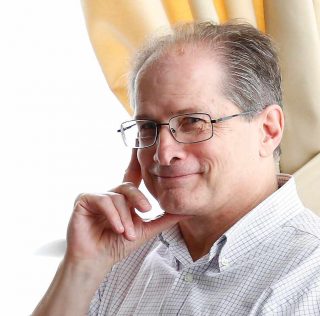 Stephen Emmett Lyons died peacefully in a Boston hospice, with family members at his side, on December 2, 2020, of cancer. An award-winning science documentary writer, producer and director, he was 65.

Dedicated to his craft, he continued working until his last month, overseeing programs through his company, Moreno/Lyons Productions, which he co-founded in 2004 with his wife, producer Aida Moreno. In recent years, they completed two major, independent mini-series for public television that Stephen developed, produced and wrote: THE MYSTERY OF MATTER: SEARCH FOR THE ELEMENTS, a 2015 three-part docudrama on the history of chemistry funded by the National Science Foundation and the American Chemical Society; and ACROSS THE PACIFIC, a 2019 three-part docudrama about the early days of global aviation, created in association with the Pan American Airways Foundation with funding from the National Endowment for the Humanities and others. Steve’s incisively written reenactments about historical figures, his interviews with experts, and innovative animation made science and history compelling and lucid. THE MYSTERY OF MATTER was honored with an Emmy for Lighting Direction and Scenic Design for its historic recreations. (Both series are available via public television, major streaming services, and libraries.)

Previous Moreno/Lyons productions include a 2007 NOVA episode, PERCY JULIAN: FORGOTTEN GENIUS, about a pioneering Black American chemist, for which Steve and his team were honored with an American Association for the Advancement of Science award for science journalism and an Emmy for Lighting Direction and Scenic Design. For both PERCY JULIAN and MYSTERY OF MATTER, Steve developed print and video curricular materials for teaching chemistry nationwide. In 2005 the Chemical Heritage Foundation awarded him the John C. Haas Fellowship in Public Understanding of Science. Stephen was a member of the Writers Guild of America, East and the Directors Guild of America.

Early in his career, Steve worked as a reporter at several newspapers, among them the Daily Hampshire Gazette and the Louisville Courier-Journal, covering politics, science, medicine, and the environment. He spent several years writing about environmental issues, working closely with legendary environmentalist David Brower, the first director of the Sierra Club, founder of the Friends of the Earth, and a valued mentor. Stephen edited several books of nature photography by Brooks Atkinson and edited a 1978 book, “Sun: A handbook for the solar decade”.

In 1986 he was awarded a Macy Fellowship in science broadcast journalism at WGBH in Boston, which led to a position developing projects as a Senior Editor for the PBS science series NOVA. There, he contributed to programs ranging from Mt. Everest to the Kennedy assassination to the Loch Ness Monster, among many other topics.

At WGBH he met and fell in love with producer Aida Moreno, the original executive producer of ANTIQUES ROADSHOW and the creator of CHAMPIONSHIP BALLROOM DANCING; they were married in 1988. His 32-year marriage to her, and their three children, brought him the greatest joys in life. He was an exemplary husband and father and supported his family with unwavering love and attention, in trial and triumph. Happily, he and Aida saw their eldest son married this past August in an intimate church ceremony.

His family and close friends will always remember his serious demeanor and fierce intellect, leavened by a genuine underlying personal warmth and wry sense of humor. He was an anchor —grounded, patient, hardworking, and kind. As a young man, he shepherded his younger brother Andy through his last year of high school to graduation after their father’s untimely death.

An avid runner and decades-long player in a serious pick-up basketball league, Steve was a fan of all sports, but especially baseball. He was a team owner in a fantasy baseball league with his brother Andy, and he was an unstoppable force in Scrabble.

He is survived by his mother, Sheila O’Donnell Lyons of Stonington, CT, his wife Aida Alves Moreno of Arlington, MA, and his children: Daniel and his wife Erika, John Emmett, and Katherine, all of Boston. The second of six siblings, he is also survived by Robert, Elizabeth, Margaret, Andrew, and Charles Lyons.

Stephen will be interred at Mount Auburn Cemetery, and a memorial celebration of his life will be held at a date to be determined. Donations in lieu of flowers may be made to Dana-Farber Cancer Institute in his name.