The Grammy-winning audio engineer behind the BSO’s radio broadcasts has recorded scores of virtual classical concerts. 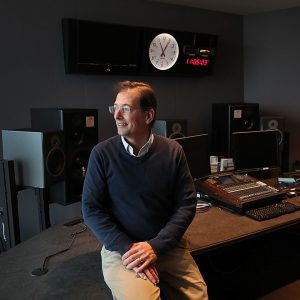 Within Boston’s classical music sphere, the name Antonio Oliart Ros is synonymous with excellence in recording. Outside of that small world, relatively few people know who he is. But if you’ve listened to any virtual classical concerts recorded by a Boston ensemble or artist since Memorial Day 2020, you’ve probably heard his work, whether you knew it or not.

As the engineer behind CRB Classical 99.5′s weekly Boston Symphony Orchestra broadcasts and its “In Concert” series, as well as numerous albums — two won him Grammy Awards in 2019 — he was already one of the busiest people in the industry before the pandemic. But at a time when live music was at a standstill and gathering performers and audience in the same room was unthinkable, Oliart Ros took prolific to a new level.

“Given that GBH is a TV station and a radio station, the pandemic forced us to join the two teams and say, ‘Look, here’s an opportunity of helping the music community, and becoming this virtual concert hall,’ ” Oliart Ros said in a Zoom interview.

Since last spring, he has recorded more than 75 virtual or hybrid performances produced by GBH, including the Handel and Haydn Society’s “Messiah for Our Time” in December 2020 and the Tällberg Foundation’s “Jazz for the Planet” sessions in October 2021. Behind the console at hybrid performances, he uses his skills to deliver the virtual audience the closest possible approximation of the rich, full sound they’d expect at a concert hall. His upcoming scheduled public concerts include Rob Kapilow’s “What Makes it Great?” celebrating the music of Lerner and Loewe, presented by Celebrity Series (Jan. 21) and a program of Handel and Vivaldi with Boston Baroque (March 19), both at GBH.

“A lot of recording is about solving problems,” said Anthony Rudel, GBH general manager for music. “Antonio is wonderful at thinking through the problems and solving them.”

”Even if I’m obsessing about something, he doesn’t get impatient or angry, but is always ready to try more things and work some more,” said violinist Augustin Hadelich, whose recording of Bach sonatas and partitas — recorded at GBH’s Fraser Performance Studio with Oliart Ros in summer 2020 — is nominated for a 2022 Grammy Award in the Best Classical Instrumental Solo category.

Oliart Ros arrived at GBH in 1995 after following a serpentine path to a career in audio engineering. Born in Veracruz, Mexico, he grew up immersed in the “son jarocho” (“Veracruz sound”) folk music of the region. He started playing the flute as a teenager and continued studying privately even as he pursued a degree in electrical engineering — one he never completed. At the encouragement of his teacher, a visiting American named Karl Kraber, he applied to Mannes School of Music in New York City and was accepted. But hints at his future career were already visible: during his first year at Mannes, the school relocated from the city’s Upper East Side to the Upper West Side, and a recording studio was in the offing for the new facility.

“I didn’t know anything about recording back then. But I knew about electrical engineering, and I was a student from Mexico and needed a job,” Oliart Ros said. “So I volunteered to help . . . and that’s how I started.” He would go on to play a central role in designing Fraser when GBH moved to its current complex in Brighton….