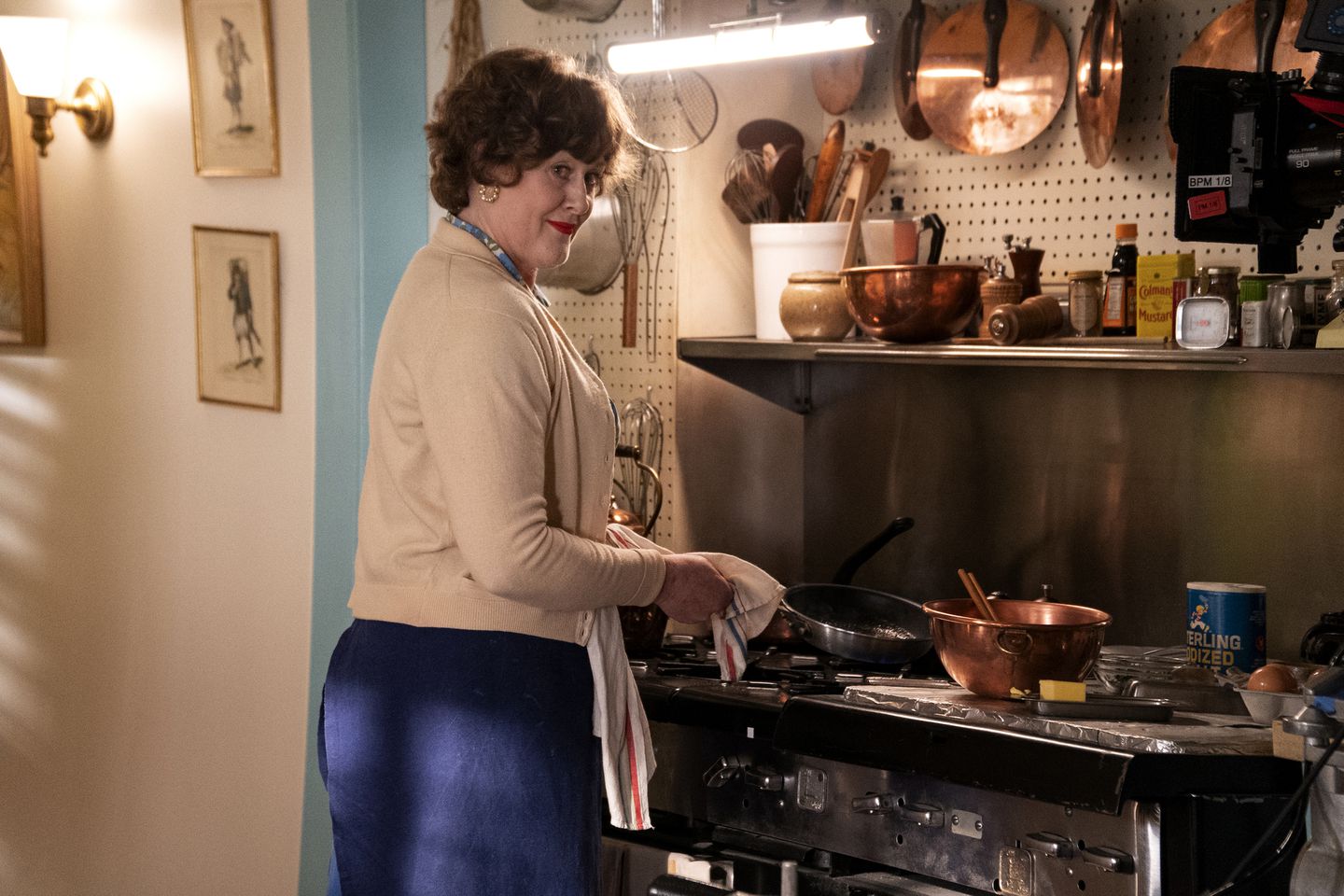 The series depicts the breakthrough moment that led to the launch of “The French Chef.” During an appearance on WGBH’s “I’ve Been Reading” to promote her cookbook “Mastering the Art of French Cooking,” Child steals the show by cheerfully beating some eggs and spontaneously cooking a French omelet on a hot plate live on set. The host is perplexed but viewers are smitten. They write letters to the station demanding more. Whether flubbing the flip of a potato pancake, dropping ingredients on the floor, or rescuing a recipe that had gone sideways, Child was unafraid of making mistakes, and fans loved her for it. She pioneered television’s first successful cooking show, became the first celebrity chef, and changed the way Americans thought about food.

We spoke to Lancashire over Zoom about the real Julia, the series, and filming in Boston.

Q. What about Julia as a character drew you to want to play this part?

A. Well, in truth, I knew nothing about her at all. I only knew her because of the Meryl Streep film [”Julie & Julia”]. But she seduced me in the same way that she seduced everybody. You fell in love with her — her wit, her wisdom, her joy, her enthusiasm, her energy. She was someone who plows their own furrow and wasn’t trying to conform. Which I adore and is hugely appealing in a character. She was just unafraid to be herself.

Q. What was it about Julia that made her such a refreshing figure to television audiences of the 1960s?

A. She was quite unlike anything that viewers had seen before. But I think she knew to play to the cameras and had a way of making everybody feel comfortable. Any elitism that anyone thought was there in French cooking, she took away, and she allowed everybody to believe that they were perfectly capable of doing it. She was a jolly good egg, wasn’t she?

|Prior to starting the cooking show, she had a very rich and eventful life with Paul, and they’d traveled for his job. So when she landed at WGBH in her 50s, she was a well-rounded and secure individual, and I don’t think she ever felt the need to impress.

Q. In the series, we see Paul’s initial snobbery towards television, but he comes around to Julia’s idea for a cooking show, and they purchase their first TV. How influential was Paul to the whole enterprise?

A. When she started, there was no template for a cooking show on television. They were making it up as they went along! They really were like conspirators. They were terribly in love, and it was a love that was very deep and enduring. He helped design the set, which was based on Julia’s own kitchen, and most of the beautiful photographs that you see of Julia’s food are Paul’s. But he was also very happy not to be in the limelight and happy for Julia to step into that space, even though it was quite an adjustment for her.

Q. What are the challenges of playing a real-life person? Is there more pressure to do justice to the person or a worry that you won’t live up to the public’s impression of them?

A. Yes, there’s a real responsibility because you become almost a custodian of their legacy. So it has to be approached with absolute respect. I like to think we’ve just borrowed Julia’s shadow, but we will never, ever abuse it. She’s too loved and adored, especially by myself.

Q. What kind of research did you do to prepare for the part?

A. I watched countless episodes of “The French Chef” and as many interviews as possible. But one source that was very interesting was the book of letters, which were compiled between her and Avis DeVoto, “As Always, Julia.” Because it’s her words, her phrasing, her language, her thoughts, and you can’t deny those.

Q. How did you figure out Julia’s distinctive quavering voice that seemed to journey through several octaves in a single sentence?

A. Well, I’m not a mimic. But the thing I found challenging about her voice is that her range is enormous, and the timbre of her voice is very specific and it isn’t within my vocal range at all. So I tried to find a parallel that was suggestive of Julia’s voice and captured that vocal eccentricity and the musicality and her phrasing.

Q. Did shooting the series in Boston and Cambridge help you to find the character?

A. Oh, it certainly did. Having that backdrop gives us a degree of authenticity that I don’t think you could really find anywhere else. And we visited many places that Julia went to [in real life], and I think it helped and added a dynamic to the show. I met so many people who wanted to tell me stories about Julia because they’d met her when she’d come to their restaurant or event. And if she came into a restaurant to eat, invariably she would end up in the kitchen with the chef, and they’d be sharing stories and swapping recipes.

Q. Did you learn any helpful insights about Julia from those conversations?

A. So many people told me about their encounters with her when she was switched on, when it was the public persona Julia was delivering. But when I was staying at the Boston Harbor Hotel briefly, one of the managers came over to me and said, “When I was much younger, she’d been at a function here, and we needed a driver to take her home, and so I offered.” And I said, “Well, what was the conversation like? Because it was only the two of you, it must’ve been very intimate.” And they said, “Well, she got into the backseat of the car and she just let out a huge sigh — then sat in silence all the way home.” And, you know, that was the most useful conversation I had with anybody because that silence spoke volumes. This was the Julia who was switched off. Away from the public. Away from the cameras. And we see so much of that Julia in the series.

Q. What do you remember about filming in Boston and your time here?

A. We filmed in the Public Gardens quite a lot. I spent a lot of time there. So if anybody saw a woman wandering around Boston pulling a small trolley behind her filled with my scripts, and sitting down somewhere and reciting lines and learning them, that was me!