Sheila Brass baked her first cake at age 11 and became an overnight success, as she liked to say, at 79 cohosting the PBS TV show “Food Flirts” with her younger sister, Marilynn. 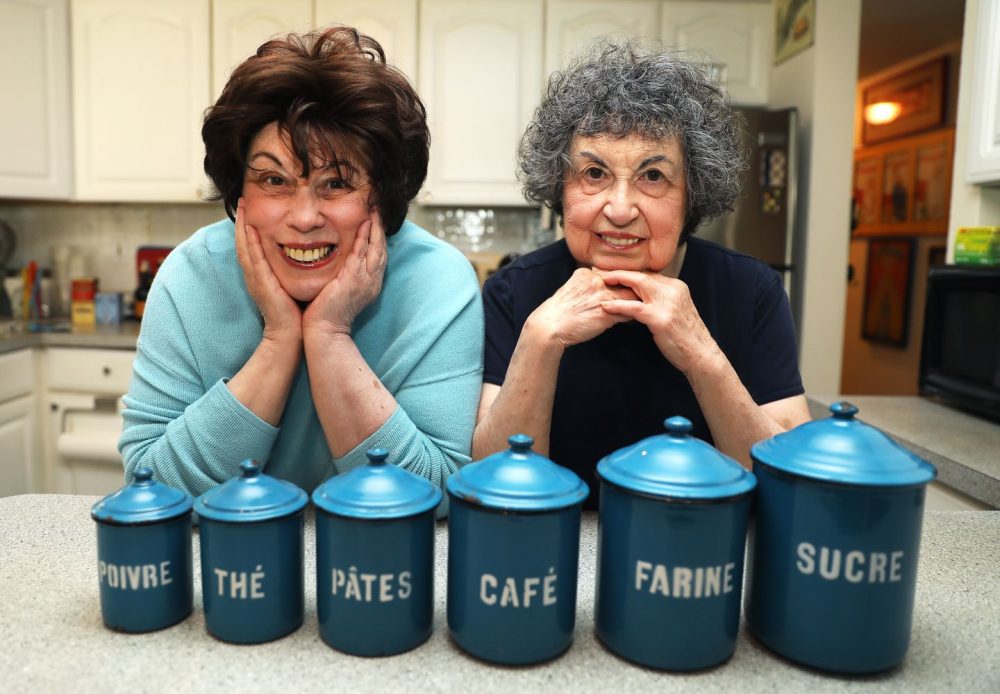 The Brass sisters, Marilynn, 75, left, and Sheila, 80, posed with a late 19th-century French enamelware canister set from their antique collection in 2017. Photo: Pat Greenhouse via the Boston Globe

Homey scholars and renowned collectors of heirloom cookbooks, the Brass sisters explored their bucket list of restaurants for the show, charming chefs along the way. In one episode, Sheila Brass and a chef demonstrated their strength as each churned food through a hand grinder. Then she gave his bicep an admiring squeeze.

“What can I say? We love to flirt. But we’re harmless,” Marilynn said.

“Speak for yourself,” Sheila replied with a hint of reproach.

A fashion designer turned author who had delighted in every new direction her life offered, Sheila Brass died of Alzheimer’s disease Wednesday in the CareOne at Concord skilled nursing facility. She was 85 and previously had lived for many years in Cambridge.

“We always tried to find ways to feed people,” her sister said. “That was one of our goals.”

Engaging and full of questions, they also fed their boundless curiosity, which endeared the sisters to all they met.

“She was such a positive force in this world,” Denise Drower Swidey, the show’s culinary producer and supervising producer, said of Sheila. “Everybody she met felt an instant connection to her because she was so authentic.”

As memorable as they were in person and on their show, the most enduring legacy of Sheila and Marilynn Brass may end up being their diligent scholarship, which they shared as authors in a down-to-earth way for home cooks and bakers.

For years they found old cookbooks at yard sales and in less likely venues, including a town dump in Maine. Some volumes were so ancient they were held together by nails. Others had handwritten recipes on scraps of paper tucked between pages or scribbled into margins.

In the books they wrote, the Brass sisters included recipes requiring ingredients that might already be in the home or easily found in a quick supermarket trip. Sheila Brass did most of the testing of often handwritten recipes that had been handed down for generations, some dating back 100 years or more….

More than just a collection of recipes, their books presented a kitchen-eye’s view of the lives of women and their families from times lost to memory. To encourage readers to continue the handwritten tradition, they left blank areas in the back of their books.

“We have several pages that are just lined,” Ms. Brass said, “so that people can write their own stories.” …

Both sisters worked in different capacities at WGBH as well and ran their own antiques business — along with collecting recipes, they amassed a collection of food molds and kitchen items.

They also had worked for several companies through the Kelly Services placement agency.

“We reinvent ourselves,” Sheila Brass told The Times of Israel in 2019. “We’ve recreated ourselves, reinvented ourselves many, many times.”

Ms. Brass “was such an inspiration because she had so many career pivots and life changes as an older woman,” said Swidey, a freelance TV producer who met the Brass sisters when they were judges for a cooking contest.

While helping to put together the show and find underwriters, the Brass sisters would arrive at meetings carrying a tote bag filled with a honey cake and plates and cutlery for all to share.

“They were exceptional at breaking down barriers with their personalities and scrumptious treats,” Swidey said.

“Sheila had this rosy, sunny, optimistic outlook on life, and she just baked from the heart,” she said. “There was no problem that a sweet from her kitchen couldn’t overcome. She was a natural baker and had great instincts, and that baking was how she showed her love as well.”

A memorial service will be announced for Ms. Brass, whose sister was her only immediate survivor. …