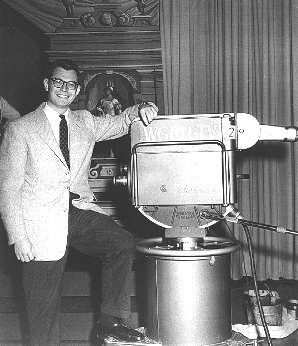 I spent my professional career in Public Television, first at WGBH where, in 1956, I was hired to start school television for the state of Massachusetts.

In 1960, Hartford Gunn asked me to help create the Eastern Educational Network, the nation’s first regional public broadcasting network, and I spent the next four years as its Executive Director.

I returned to WGBH in 1964 as Assistant and then Associate Director of Programs. In addition, I created and hosted a series of local film and taped programs examining life in Boston, immodestly titled, MICHAEL AMBROSINO’S SHOW.

In 1970, I was appointed American Fellow Abroad by the Corporation for Public Broadcasting and attached to the BBC in London, spending much of the year working on 24 HOURS, a nightly current affairs program on BBC 1, and then went on to study the BBC’s storytelling techniques for popular documentary production in science, technology, archaeology, and the arts.

Upon my return to WGBH in 1971, I created and became the Executive Producer of NOVA, now in its 45th season.

I left again in 1976 to create the ODYSSEY series that examined the people of the past and present using the disciplines of archaeology and anthropology. For this venture, I developed a new production company, Public Broadcasting Associates, which also produced a series on the nature of scientific evidence, THE RING OF TRUTH, created and hosted by MIT Professor Philip Morrison.

Also at that time, I was asked by the Unitarian Church to assist a newly formed production company, BLACKSIDE, run by Henry Hampton. I became involved as Consulting Executive Producer, in the funding and production of EYES ON THE PRIZE, the fourteen-episode history of the civil rights movement.

In 1992-93, I returned to my early production roots by producing and appearing on camera as the correspondent for the WGBH series FRONTLINE, entitled JOURNEY TO THE OCCUPIED LANDS, a ninety-minute examination of the 26-year-old Israeli occupation of the West Bank and Gaza.

My first visit to WGBH was in the fall of 1955, just after TV had gone on the air at 84 Mass Ave. in Cambridge. I was at work developing a TV master plan for the University of Connecticut at the time, and wanted a tour of one of the few (12) “educational” stations on the air…

Read stories by, and about, Michael in The Michael Ambrosino Collection.