I started at ‘GBH as a Boston University student assistant for the Ten O’Clock News and, for the next four years, I worked in production and post-production for series and specials shot on video, including Evening at Pops (in Symphony Hall, on the Esplanade, and from the Lincoln Memorial), Elliot Norton Reviews (his last seasons), This Old House (a few early seasons), The Victory Garden, Tom Rush Live at Symphony Hall, Masterpiece Theater, Mystery!, American Playhouse, Two Gentlemen Folk, and others.

In 1985, I moved into post-production, first as a news editor, then as a promotion editor, where I assembled multi-program promos.

After leaving in 1986, I produced national promos at PBS in Alexandria, promoted local and national programs at Vermont PBS (then ETV), and served as the first executive director for an educational cable channel in Burlington, Vermont. In 1997, I was drawn to higher education full-time and worked at MIT, Dartmouth, and Bates in online communications. I consulted in K-12 and higher education communications and program development for Harvard Law, the Maine Department of Education, Educate Maine, and UNE.

I am currently a digital communications strategist at Maine Coast Heritage Trust, the largest statewide land trust in Maine. 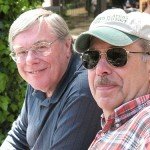 I was honored when Don Hallock accepted my offer to publish this Web site back in 2007, and I’m pleased to be able to expand it to allow more opportunities for participation. I’d like to thank, especially, Fred Barzyk and David Atwood for their guidance and support over the past years.

Each generation of WGBH staff stands on the shoulders of those who came before, and I have learned a lot from this creative bunch who put WGBH on the map.