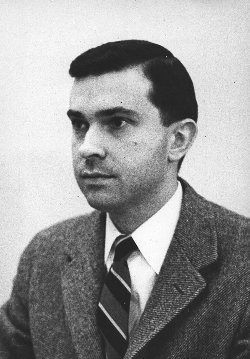 When Hartford Gunn came to work at Lowell Institute Cooperative Broadcasting Council (LICBC) in the spring of 1951, he had four things in common with the three twenty-something staffers that Parker Wheatley had employed (and retained) over the previous four years. Like them, he was very young. Like them, he had been in uniform during World War II. Like them, he was taking his first full-time civilian job. And like them, he had had no professional experience in radio.

But there were differences, too. While all of them had either majored in broadcasting at college or been members of their college’s undergraduate radio station, the first three were programming and production types; Hartford had been a techie. Moreover, he also had something they didn’t have: an MBA.

Ralph Tangney, Jack Summerfield, and Larry Creshkoff had been hired to develop and produce programs that would be broadcast by five Boston radio stations (WBZ, WCOP, WEEI, WHDH, and WMEX). They had served as junior members of Wheatley’s creative team, with the mission of extending the reach into the community of the Council members. Gunn, on the other hand, had been hired, in effect, to provide a countervailing force to the somewhat free-wheeling style that characterized that little band of brothers with educational-uplift stardust in their eyes.

By the time Hartford came on board, a construction permit for an FM station had been granted, and LICBC’s mission was broadened beyond its previous role as a production agency only. This called for a number of changes in the organization’s executive structure. The Council’s chairman and ace-in-the-hole financial backer, Ralph Lowell, acknowledged Parker Wheatley’s programming creativity but disparaged his administrative skills and insisted that an assistant be hired to handle the business affairs of the station-to-be. Thus, Gunn’s first assignment was to get the station on the air, which meant dealing with — among other things — electronic hardware, broadcast engineers, studio space, and finances. It also meant dealing on a bottom-line level with Lowell. The original crew was delighted to have somebody else who would worry about budgets and other such distasteful, mundane details. At a very fundamental level, however, they felt that Hartford was from another planet.

Ultimately, of course, it would be Gunn who prevailed. WGBH-FM did get on the air that fall, followed in 1955 by WGBH-TV. Over the next two years, however, the differences between Wheatley’s and Lowell’s management styles multiplied, and Gunn was chosen to succeed Wheatley as general manager. Soon he was the only member of the original team still in place, and his star continued to rise. To quote a leading veteran of the public television scene:

“In the dozen years during which he led the Boston station, Gunn moved it into the front ranks of public television, positioning it as one of the nation’s top two public stations. In the course of those years, Gunn created the first interconnected regional network (Eastern Educational Television Network) and goaded NET into adopting higher technical standards, including a major shift into color television. Later, at PBS, he led the planning for the satellite distribution system that is in place today. Gunn was a ‘systems man,’ a master planner, somewhat less interested in programs than in perfecting the process that produced them.”

During his presidency of PBS, he survived some nasty confrontations with the Nixon administration, but by 1975 the chairman of the PBS board was at odds with Hartford over his management style. He was replaced as president and moved into a position as vice-chairman, where he worked on long-range planning. The irony of his departure from the PBS presidency because of a clash with the chairman of his board was not lost on those who remembered that 18 years earlier Hartford had become general manager of WGBH following a conflict over management style between Ralph Lowell and Parker Wheatley.

As vice-chairman of the PBS board, he was able to launch a number of projects for the entire network that are still in place. However, in 1977 he learned he had a rare form of cancer of the thyroid. He left PBS and returned to work at the station level in 1980, when he became senior vice-president and general manager of KCET in Los Angeles.

Subsequently he served as vice-president of program development for COMSAT. For nine years after discovery of his illness, Hartford underwent repeated medical interventions that included radiation, chemotherapy, and unsuccessful surgery. He died on January 2, 1986, at Massachusetts General Hospital.

During his 35 years in public broadcasting, Hartford left his mark — in the structures he developed, the people he hired and promoted, the programs he helped to see the light of day, the many battles he fought. He demonstrated — despite the early qualms of his young colleagues in 1951 — that a head for the bottom line does not automatically equate with Philistinism. Hartford had a firm commitment to make use of technology in order to build and strengthen an alternative broadcast communication system beyond what was then available — before videotape, before color, before public financing, before satellite distribution, before the personal computer. We can, of course, only imagine his reaction today if he were to contemplate the approaching interplay in the worlds of broadcasting, education, and the Internet. But I can just see him rubbing his hands in gleeful anticipation as he says, “Now there’s a challenge worth tackling!”