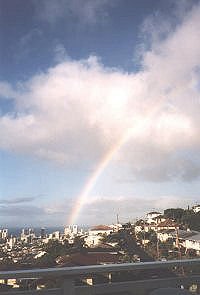 My view overlooking the city.

I live in Honolulu — and have now for over 33 years. Though it might seem improbable — devoted to the television business as we all were — I more or less departed the world of video in 1976, and have, since then, maintained a private practice in psychotherapy.

I’ve been married to the wonderful Kathy Hallock since then, and have two fabulous kids. Kathy is a hospice social worker, my daughter Star is an emergency room nurse, and son Sean, taking after his dad with a powerful love of theater and film, has been on the production staffs of “Lost” and “Hawaii 5-0.”

I began working at WGBH immediately after escaping high school in 1956, starting out in the scene shop under Peter Prodan, and doubling as the station’s slide photographer. During that first year Dave Davis (then production manager) concluded that the station needed two full time cameramen. Frank Vento was the first to be hired, and very shortly thereafter my long-time dream was realized when I got my hands on a TV camera for the first time (it seems there has always been a camera of one kind or another in my life).

In late 1959 Greg Harney, in what I believe to have been a fit of tobacco withdrawal, promoted me to the level of producer/director. My bearded and crew-cut presence was tolerated around the station during the next three years while I directed, at one time or another, about everything on the schedule; high points for me being Max Lerner’s “The Age of Overkill,” “The Make-believe Clubhouse,” “Jazz with Father (Norman J.) O’Connor,” the Boston Arts Festival, “The World of Buckminster Fuller” — remember these?

In 1963 I married Kay Mote who had been Bob Larsen’s secretary, and we moved to New York City to pursue my interest in painting. After a year there (naive as I had been, thinking I could be an instant success as an artist) I took up TV work again part-time, free-lance, in order to make ends meet, first on camera, and then directing, with NET, WGBH, WNET, CBS, NBC, Teletape Productions, and the Video-Tape Center, to name a few. 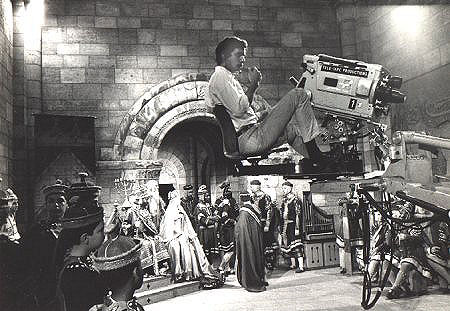 I traveled around the country quite a lot, and to Europe a bit working on some interesting projects. Though things went very well for me, and I was never at a loss for work, I did, by 1969, loose patience with the television production business and the east coast in general. The excess of insanity and the dearth of humanity had taken its toll (not to mention my divorce from Kay). 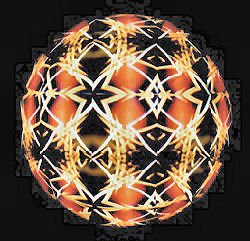 Images from the Videola (a video sculpture), and its creator. The exhibit was produced at the National Center for Experiments in Television and shown at the San Francisco Museum of Modern Art, 1973. More on that project can be found at: http://ncet.torusgallery.com/videola/videola.html (Videola photos: Penny Dhaemers)

So, after some years of fun drama work with NET/WNET, a Herb Alpert special, a couple of Streisand extravaganzas, countless less memorable projects, and way too many commercials, I moved to California and hung out around Santa Cruz and San Francisco for a couple of years, getting my head clear and absorbing the restorative energy of the mountains and redwood forests. It was in this period that I first visited Hawaii — an entirely momentous event, as it later turned out! Eventually I took a job as production manager and artist-in-residence with the National Center for Experiments in Television — an electronic sand-box for artists and other video-dreamers housed at KQED in San Francisco (and here, by the way, is one such dreamer – with one of his projects).

During the five years with NCET, I worked among a collection of extraordinarily talented and creative individuals making, promoting and exhibiting video as an art form. We were all a bit looney of course, largely groping our way along in this new, relatively unexplored – and at that time barely even existent – field. But coming from the abstract expressionist visual tradition, and with a “WGBH” background in highly ‘exploratory’ TV/video it felt fairly natural. And it turned out that, at the very same time, Fred Barzyk – one with whom I had had the pleasure of sharing the very same ‘subversive’ background – was doing almost the same thing back east. 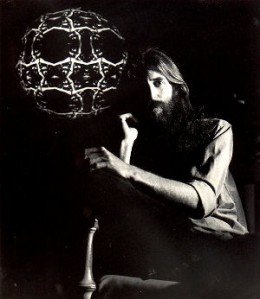 Later in that period I took up studies in psychology and holistic health. Eventually, sanity won out again; I met and married Kathy, who was a fellow student of the mind/body interface and the beauty and sanctity of life. I left the National Center in 1976, whereupon Kathy and I emigrated to the farthest western point in the American empire, beginning a new life in Hawaii.

I’ve done a bit of TV work in the intervening years, most notably a 2002 PBS special “The Montana Summer Symphony.”

Never having outgrown an addiction to the making and promotion of art, my personal output now is all digital abstraction (why would one ever want to give up art?). I recently concocted TORUS (the above mentioned on-line art gallery, specializing in work by fine artists of Hawaii), and I occasionally dabble in rudimentary web design. Earning my living as a counselor is and has been a wonderful vocation, inspiring in me a deep respect for the world of the mind, and a love of the wonderful people who find their way into my practice.

Hawai’i has been, and continues to be, incredibly good to us. It’s a very happy life we live here in paradise.

Finally, here’s my love and me. 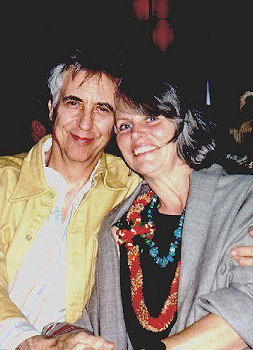