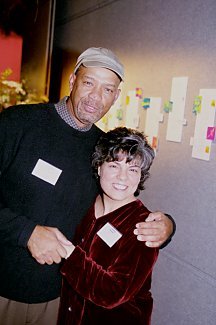 Aida Moreno with Bob Wilson at the 2000 Reunion

Aida Moreno is one of public television’s most prolific producers, with more than two decades’ worth of production and management experience and a long track record of creating successful primetime programs and series.

She is best known as the creator and original Executive Producer of Antiques Roadshow, the most popular program on PBS for the last fifteen years. But she worked on a wide variety of programs during a 24-year career at Boston’s WGBH before leaving to form Moreno/Lyons Productions. She is currently Executive Producer of America’s Ballroom Challenge, a popular dance program now in its fourth season on PBS.

Moreno began her television career as a production assistant and associate producer on programs ranging from Julia Child & Company to Evening at Symphony and Evening at Pops, and then broke into the producing ranks in 1980 with Championship Ballroom Dancing. What was supposed to be a single 90-minute special proved so popular that it kept coming back year after year. Championship Ballroom Dancing was the first program to bring competitive ballroom dancing to American television. This show ultimately ran on PBS for 20 years, consistently ranking among the highest-rated specials of the year. In 1999, the ballroom community recognized Moreno’s contribution to the sport by inducting her into the World Dance Hall of Fame. She was the first television producer to be so honored. Last year she was named to the U.S. DanceSport Hall of Fame.

In 1993, Moreno was asked by WGBH to assist the producers of a longtime BBC program called Antiques Roadshow. She returned from England convinced that an American version of the appraisal show could succeed. Three years later, the American model, complete with a host of improvements of Moreno’s devising, went into production and quickly became the most successful series in PBS history. It has earned multiple awards and nominations.

Specializing in multi-camera event shows, Moreno has also produced political programs such as Candidates ’88 with Marvin Kalb; programs on public issues such as Condition Critical: The American Healthcare Forum, with Phil Donahue, and Getting the News in the 21st Century, with Ted Koppel; and a number of successful PBS pledge specials, including Big Band Ballroom Bash and The Jewel in the Crown Salute. She also produced a documentary on blues guitarist B.B. King. That special, Let the Good Times Roll won the prestigious W.C. Handy Award.

After leaving WGBH to start her own company, Moreno returned to her roots, producing an innovative how-to ballroom dancing program for American Public Television. Ballroom Dancing Basics is hosted by former US Latin champions Tony Meredith and Melanie LaPatin, who offer viewers easy-to-follow instructions for six simple dance patterns that can be used to perform many different dances. The program, shot before a live audience and featuring original music, with performances by Tony and Melanie, is still airing as a pledge program on PBS stations around the country.

In 2006, Moreno created and produced a new primetime special called America’s Ballroom Challenge. The two-hour program is the first to feature all four major ballroom dance styles, and the first to have the couples compete across dance styles to determine a single winner. The program drew rave reviews from media critics ranging from the Washington Post to Entertainment Tonight and attracted one of the largest audiences for any PBS program in 2006. This popular special keeps on coming back season after season. All told, it has featured 14 hours of competitive dancing over its past seasons. A new season is in production.