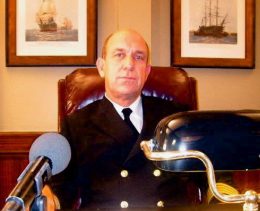 As a Navy judge on the JAG series

I started out at the station in an apprentice program in the spring of 1968. We moved around learning lighting, cameras, and stage managing. I was chosen by Chas Norton to apprentice lighting and worked with him for quite a while until I was given the junior lighting director position and did that till I left in ’69.

I then left to pursue an acting career but would come back as a freelancer from time to time. As you may (or may not) know actors usually spend quite a bit of time learning their craft and consequently are always broke and working for nothing just to get experience.

I’ve been fortunate enough to have made my living as an actor since 1980. In pursuit of my acting career, I moved to San Francisco in the fall of 1969. I was back and forth between there and Boston until the spring of 1974 when I moved back to Boston. Then down to New York where I lived in New York from 1978 to 1980. From 1980 till 1984, I split my time between New York and Los Angeles settling in LA until moving to Maine in April 2016.