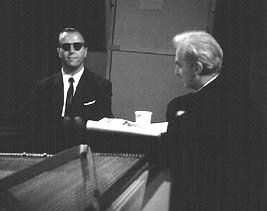 The following New York Times piece — “Rev. Norman J. O’Connor, ‘Jazz Priest,’ Dies at 81” — reveals much about the life of Father O’Connor that we — who worked at WGBH during the years when he hosted his distinctive weekly music programs — never knew. Likewise, the small section following this article makes up a bit of his history with WGBH which did not find its way into the New York Times commemorative.

The Rev. Norman J. O’Connor, a Roman Catholic priest who was also a well-known authority on jazz, died last Sunday in Wayne, N.J., where he lived. He was 81. …

Father O’Connor, whose name was seldom mentioned in print without the words “the jazz priest” attached, began making a name for himself in the jazz world not long after being ordained as a Paulist priest in 1948.

In 1954, three years after becoming the Catholic chaplain at Boston University, he was named to the board of the first Newport Jazz Festival. In the ensuing years he was a familiar presence there, clerical collar and all, as the master of ceremonies for concerts and the moderator of panel discussions.

During his decade at Boston University, Father O’Connor also became known as a jazz writer, contributing a weekly column to The Boston Globe and articles to Down Beat, Metronome, and other magazines. In the 1960’s, after moving to New York, he was the host of a local television show, “Dial M for Music,” and a syndicated radio show.

His association with the Newport Jazz Festival stemmed both from his lifelong love of jazz and from his friendship with the festival’s producer, George Wein. Father O’Connor was a frequent patron of Storyville, the Boston nightclub Mr. Wein operated.

“In those days,” Mr. Wein wrote in “Myself Among Others,” his autobiography, “it wasn’t common for a Catholic priest to walk into a jazz club; in fact, it sounded like the beginning of a bad joke.”

Norman James O’Connor was born in Detroit on Nov. 20, 1921. He became interested in jazz at an early age and began playing piano with local jazz bands while in high school. He continued to work occasionally as a musician into the 40’s, but had abandoned any thought of music as a career by the time he enrolled at Catholic University in Washington.

He nonetheless remained passionately interested in the subject, and wrote his doctoral thesis on the aesthetics of popular music.

In 1962, Father O’Connor was named director of radio and television for the Paulist Fathers in New York. He became a fixture on the New York jazz scene, and remained one even after being named director of the Mount Paul Novitiate, a church training center in Oak Ridge, N.J., four years later.

In 1980, Father O’Connor was hired as the executive director of Straight and Narrow, a drug and alcohol treatment center in Paterson, N.J. He retired last year.

His profile in the jazz world became lower in his later years. But he remained the jazz priest to the end, producing benefit concerts by Marian McPartland and other musicians for Straight and Narrow with the help of Mr. Wein.

He is survived by two brothers, Patrick O’Connor of Detroit and James O’Connor of Sebastopol, Calif.

Over the years Father O’Connor encountered some criticism for his involvement in the jazz world — although he said most of it came from lay Catholics who viewed the music as disreputable, rather than from members of the clergy.

“Jazz has no morality,” he said in 1962. “If a listener thinks jazz is immoral, it’s because he brings to it remembered associations, such as a pretty girl in a slinky gown, undulating dancers or people overindulging in Prohibition-era speakeasies.”

Father O’Connor also saw nothing wrong with using jazz in religious services. “I’m a 20th-century man,” he told The Daily News in 1969. “I’m accustomed to the modern sounds of the piano, the drum, the trumpet and the saxophone.”