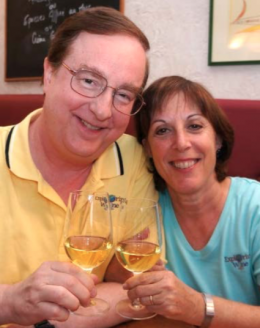 Charlie and Jill worked together at The Ten O’Clock News on WGBH – Charlie was an on-air news reporter and Jill was the show’s director from 1981-87. They married in 1985, the same year that Charlie left WGBH for consulting and then high tech. Job changes took them to the Houston area in 1999, where they’ve lived ever since.

Several years ago, Charlie turned his long-time interest in wine into a new career after being certified as a wine educator at the Culinary Institute of America. Their business “Exploring Wine” guides groups of travelers on luxury trips to wine areas around the world. Charlie also ran the annual “Best Young Sommelier in America” competition for several years. Jill devotes herself to saving rescued wolves and wolf-dog hybrids at Texas’s only wolf sanctuary.

Old friends who want to track Jill and Charlie down may find them in the vineyards of France, Italy, Spain, Hungary, Australia, New Zealand, South Africa, or another exotic wine destination. Check out exploringwine.com!