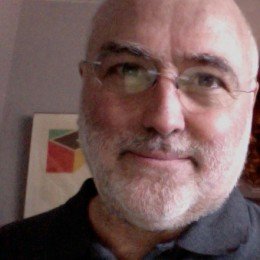 Primary mover in introducing computers into the WGBH print, video, and multimedia design and production process.

Since 1986, focused on computer-based multimedia projects, including the landmark Interactive NOVA: Animal Pathfinders.

I remember Paul roller skating in studio A at one or more of our annual parties – a clown with grace. I also remember a beautiful painting by him. – large, mostly gray, a street and telephone wires – bought by CarolineCollins another very memorable WGBHer!

Paul was indeed a principal advocate for for the shift from Digital Equipment word processors to Apple Macs. The design department was the early adopter and by the late 80’s (by Apple’s own account) WGBH had the highest per capita installation of Macs of any company in the country. Certain people just have digital in their blood. I remember, shortly after getting our first Mac Classics Paul was weeks into a huge experimental project for NOVA when everything on his screen went blank in a puff of smoke. Instead of slitting his wrists (as I would have done), his eyes… Read more »

Dear Paul Souza,
I remember with glee that back in the fun days, you got around 125 Western Avenue on roller skates. Very skilled and very stylish!

Hi Paul… I think I saw some of your animation tonight on a commercial for a bank.

Or else it was by Tom Snyder with his wigglevision ?