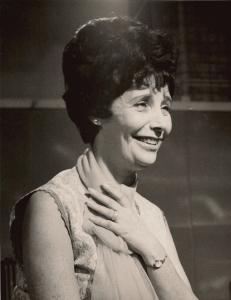 As the host of “Fun with French’’ on WRGB-TV in New York and later “Parlons Français,’’ part of WGBH-TV’s 21-Inch Classroom program in Massachusetts, Mrs. Slack was on the forefront of a teaching method educators are still trying to fully integrate into classrooms: distance learning.

Mrs. Slack’s 20-minute, twice-weekly language lessons were interwoven with photographs and film sequences she shot in France during the summers, as well as conversations with puppets, all of it intended to give students early, and more complete, exposure to French language and culture.

For some of her young students, Mrs. Slack’s program was life-shaping.

“I am a French teacher because of Anne Slack,’’ said Cheri Saltzman of Marblehead, who as an adult became close friends with her former television teacher. “I fell in love. She was like a rock star to me. I decided in the third grade I was going to grow up and be a French teacher.’’

After the “Parlons Français’’ project, Mrs. Slack transitioned to teaching advanced French courses at Boston University and later Harvard University, giving workshops and lectures throughout the country and serving as president of the American Association of Teachers of French.

“She worked very hard, and she was very modest about her accomplishments,’’ said her son, Lawrence of Brooktondale, N.Y.

Mrs. Slack, who had retired to upstate New York to live with her son about 15 years ago, died of natural causes in her sleep Feb. 12 at Cayuga Medical Center in Ithaca, N.Y. She was 94.

Anne (Benchimol) Slack was born in Oran, Algeria, along the northwestern Mediterranean coast. Fluent in French, Spanish, English, and Latin by the time she completed high school in Oran in 1933 and then her Licence-ès-lettres, the equivalent of a bachelor of arts degree, in the mid-1930s, Mrs. Slack worked as a tutor to help her family get by. When World War II arrived in Algeria, she worked as an interpreter for the US Army’s Engineering Headquarters of the Mediterranean theater of operations, Valette said.

“She would sit there as a general was talking to local officials, and she would say, in either English or French depending who was speaking, the exact same thing as was being said,’’ her son said. “She sped up the communication process.’’

Mrs. Slack did such a good job she was sent to assist US officers in Vichy-controlled Casablanca, Morocco, her son said. While there, she met Raymond E. Slack, Jr., a young man from Niagara Falls, N.Y., who was serving in naval intelligence.

The couple was married in 1947 in Niagara Falls.

Having noticed the program’s success, in 1959 the Massachusetts Modern Language Project recruited Mrs. Slack to relocate to the Boston area to serve as on-screen host and associate director of “Parlons Français,’’ a new television program for WGBH-TV. She also was involved in developing the tapes, workbooks, and teacher in-service manuals for the program.

“They had a better studio, equipment, and a little better budget, so she could go to Europe in the summer and film,’’ said her son.

It’s estimated that the program reached more than 2 million students in the United States and Canada during its lifespan, her son said.

During its run, the program earned widespread attention, Valette said. An October 1961 article in The New York Times said it was being expanded nationwide through television stations affiliated with the National Education Television Network. Though Mrs. Slack was a “disciplinarian of the no-nonsense variety,’’ according to the article, “the zest that she brings to her assignment is highly contagious and after one or two lessons the grown-up might wish to enroll, if only to make conversation in French something for the home as well as for school.’’

“Parlons Français’’ ended in the mid-1960s, and in 1970 Mrs. Slack accepted a position as lecturer at Boston University. She also hosted weekly French radio broadcasts in Boston. In 1976, she moved to Harvard University, where she was a senior lecturer in French until her retirement in 1993.

Mrs. Slack was vice president of the American Association of Teachers of French from 1972 to 1975 and president from 1977 to 1979. For her lifelong commitment to promoting French language and culture in the United States, Mrs. Slack earned several recognitions from the French government, her son said.

Mrs. Slack’s husband died in 1994, and she decided to move to New York to live with her son and be closer to her grandchildren, Hannah and Jonathan. She also remained active in the foreign-language community at Cornell University, her son said.

In addition to her son and grandchildren, Mrs. Slack leaves a sister, Stella Benchimol of France, and several nieces and nephews.