This picture and text are drawn from the pamphlet given out at Lillian’s memorial event in 1995. 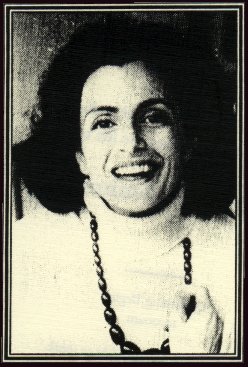 Lillian Ambrosino (1933–1995) — attorney, author, political activist, children’s television advocate, wife, mother, grandmother and all around great human being — is the reason we meet today. She was 62 when she passed away, and the cause was cancer, the scourge of our age group. Lillian fought against it for eight years until Wednesday evening. Knowing we had all gathered, she asked for life support systems to be removed. She died in the arms of her immediate family.

Born in Binghamton, New York, she graduated from Cornell University in 1955 and moved to Boston, where she soon became a radio producer at WGBH-FM. Those were the “early days,” when the radio and television staff numbered about thirty-five. We met there, and I promptly redesigned the office plan to put her desk next to mine. We were married in October 1957.

During the 1960s, Lillian carried out research in public broadcasting, making sense out of the statistics involved in One Week of ETV and literally overwhelming the total memory capacity of MIT’s massive IBM 7040 computer. Since she always had a special interest in children and television, she enrolled in the Harvard School of Education, earning her masters degree in education in 1962. For a number of years while raising the family, she was involved in the development of school curriculum.

In 1968, Lillian was one of the four founders of Action for Children’s Television, a group dedicated to higher quality children’s television. Always an easy and graceful writer, she authored Runaways in 1971, a handbook for parents of runaway children.

In 1970, when I had a fellowship to work at the BBC in London, she researched the techniques and results of children’s television in England and Europe. That background helped her upon our return, when she joined the Office of Child Development in the Department of Education, Washington. In her position as media consultant, she wrote speeches and articles and helped develop policy.

In the mid-1970s, we both served on the Indo-U.S. Sub-Commission on Education and Culture – Joint Media Working Group on Radio, Television and Film, (a title which always gave her a smile). That took her to India five times. One of these visits she conducted a lengthy production workshop in Madras, assisted by her friends Chris Sarson and Fred Rogers, for the children’s television producers of India. On another trip, she spoke on a public panel concerning women and the law with members of India’s Supreme Court.

The combined experience from government and ACT led to Lillian’s concerns over how the law was often used to deny justice for children. She enrolled in Boston College Law School in 1973, graduated in 1976, and in 1979 began a private practice in our Newton home where she concentrated on family law and communications. As much as possible, she involved her clients in key proceedings, wishing to educate and empower them in legal matters. She really loved her clients. They are many of Boston’s most prominent independent documentary producers, and she relished the time spent with them. But throughout her years of legal activity, her interest in children’s television programming remained strong. Even during her final hours in the hospital, she tuned in Mister Rogers’ Neighborhood and Sesame Street.

Away from work, Lillian was an avid gardener, a designer and creator of quilts for children, a devotee of the New York Times crossword puzzle, and a budding Red Sox fan. She loved walking, not only in the Tetons of Wyoming but also along the rustic pathways near our Nantucket home. Most of all, Lillian delighted in her family — being a parent and grandparent. That is why we survive (barely) and miss her so dearly.