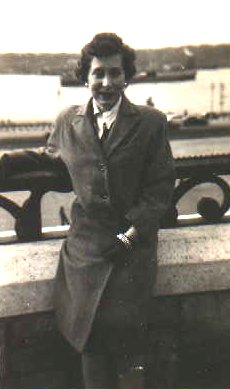 Bea Braude (aka “Bibi”) was one of the thousands of anonymous civil servants caught in the hysteria of the McCarthy era: fired from the U. S. Information Agency for knowing a suspected spy, talking to a communist, and visiting a leftist bookstore.

The opening paragraph of a front-page Washington Post article in 1995 described the late Dr. Beatrice Braude on the eve of a landmark trial at the U. S. Court of Federal Claims in which her name was cleared more than 42 years after her firing and seven years after her death.

Bibi had made her mark as a government cultural affairs officer and a U.S.I.A. analyst of French newspapers. When her career in government was unexpectedly terminated in 1953 (she was told by a “reduction in force”), she turned to study the new field of television.

She studied for her doctorate in French after her three years at WGBH-TV, and at the age of 61, Dr. Braude joined the faculty of the University of Massachusetts in Amherst. In 1975, the Freedom of Information Act opened the files, and from then on, Bea worked diligently to learn the sad facts of the injustices done to her by the U. S. government.

While a bill sponsored by Senator Jacob K. Javits to restore her name and backpay passed the Senate, it was squashed in a House Committee. But Bibi continued to fight. At her death of a brain tumor, she lived in Washington, D.C.

Her relatives and friends continued her fight into the nineties, and her name was cleared. (A chapter of Stanley Kutler’s book “American Inquisition” focuses on Bea and her struggle.)

Bibi will be remembered at Channel Two for her bubbly personality, her perceptive analysis of the news — she was the first to tell us how newly-elected President Kennedy’s involvement in Vietnam by sending in “military advisers” would cause great American losses of men, morale, and power — her great research support for Eleanor Roosevelt, and, perhaps, most of all, for introducing her good friend from her days in Paris, Julia Child, to program director Bob Larsen.