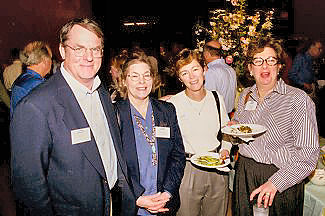 I want to let you know that a former ‘GBHer, Nancy England, who worked there in the ’70s in development with Sam Tyler, John Carver, and John Kerr, died last week of cancer.

Nancy was close to Christy Moore Millet, Lisa Getman Ellis, Jo Madden, and several others from that period. Christy and I visited her the week before she died. She attended the re-union several years ago.

Nancy Louise England of Santa Rosa, CA, died at home on August 25, 2005, after a valiant struggle with cancer at the age of 57.

Ms. England was the daughter of Daniel and Jean (Rogers) England. Her father was an executive of England Brothers department store, which had been a family business for generations.

Ms. England was born in Pittsfield, MA on May 25, 1948, and was educated at the Berkshire Country Day School, Abbott Academy, Miss Hall’s School, and Boston University.

Ms. England’s twin passions were art and helping others. She maintained an active and knowledgeable interest in contemporary arts and crafts throughout her adult life and was an avid reader with broad interests.

Her ability to connect with people and her energy contributed to her success in a variety of development and marketing positions for organizations including the Community Foundation of Sonoma County, People for the American Way, The Boston Foundation, WGBH Educational Foundation, and Boys & Girls Club of Boston.

Ms. England served on the boards of many nonprofit organizations in Sonoma County and in Massachusetts, including Southwest Community Health Center, Interfaith Shelter Network, Berkshire Country Day School, Cambridge Camping Association, The Big Brother Association of Boston, and Recording for the Blind-Boston.

Ms. England is pre-deceased by her sister, Deborah England Davis of San Francisco, CA, and survived by her sister, Judy England Angle of Sebastopol, CA and her brother, Daniel England, of Lincoln, MA, and six nieces and nephews.