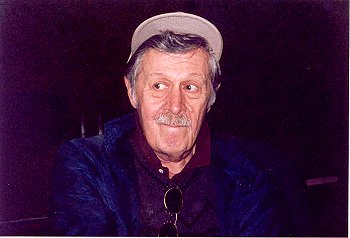 Photo from the 2000 reunion, by Don Mallinson

WGBH Highlights: Just about every second of the experience.

In particular: The Boston Arts Festival Telecasts; learning while working with David Pressman on Drama; switching a BSO with Dave Davis directing (my sweaty palms have still not dried out). Skilled artists like Hallock and Vento.

After WGBH, I was drafted into the U.S. Army and spent two years doing government and military TV at the Army Pictorial Center and in Washington, DC. Joined in those efforts by Stew White and Bob Squier … other WGBH’ers. Highlights of that era:

After discharge, I spent two years free-lancing in film and audio-visual world of Chicago before being hired as an Associate Director at NBC-Chicago. Promoted to producer-director after two years. Highlights:

I married actress Jane Galloway; we produced daughter Amy, who is now married, a mother of two, and an agent working in Chicago. Her husband’s a musician.

In 1981, armed with a bunch of Emmys and other awards, I started Bill Heitz Productions and waited for the world to beat a path to my door. It didn’t … I had to learn to go create work. A good experience. In mid 80s, I did tons of corporate and corporate image work, taught, and then began doing broadcast work again.

I’m currently doing programs for HGTV, some pledge specials for PBS (four programs on Women’s Health with Dr. Christianne Northrup), and a project for Tribune entertainment. Birth of second company, Heitz/Wison in 1998.

My wife Jane is still acting, and was most recently in the David Lynch film, The Straight Story. Last year, she was on stage with Chicago’s Steppenwolf Theatre in The Man Who Came to Dinner, which played first in Chicago and then London for three weeks. It was directed by James Burrows and starred John Mahoney.

WGBH gave me a zest for making TV and a vision that the work should be hard, satisfying, fun, and carried out with creative and enthusiastic compatriots. I don’t always find that … but the vision persists. I consider the WGBH experience a blessing.

Bill Heitz, who helped teach amateur antique enthusiasts about auction etiquette for Home & Garden Television, won Emmy awards while producing Sunday Night Specials for NBC, and once was tear-gassed while directing coverage of the 1968 Democratic Convention, died of cancer, Thursday, Aug. 29, in his Northwest Side home. He was 66 and had run his own video production firm since the early-1980s.

It was something of a storybook life, he said at an alumni reunion for WGBH-TV in Boston, where his television career began in 1957.

“He always said he didn’t know what he would do if he had to work for a living,” added his wife, Chicago actress Jane Galloway Heitz.

During his career, Mr. Heitz directed documentaries on everything from softball tournaments to classical music performances, becoming a sort of Renaissance man with a formidable intellect and contagious chuckle, said longtime friend Jack Wilson, his business partner since 1998.

“He read constantly, and as much of a professional as he was, he was as much a people person,” Wilson said. Mr. Heitz was able to quickly amass a commanding knowledge of disparate and esoteric topics, he said, but he also was adept at directing difficult actors and stressed-out production workers. “He would always drop the line that was always the good one. Then he’d sort of wink at you and give you that little giggle.”

William C. Heitz was a native of Clarksburg, W. Va., who grew up in Chicago. He graduated from St. Ignatius High School, and studied theater and journalism at Marquette University before graduating there in 1957.

At Boston University’s WGBH-TV in 1957 and 1958, he helped produce drama and classical music programs before being drafted into the Army. During that service, he directed documentaries ranging from rehabilitation for wounded soldiers to one for NASA that used nascent special effects to give viewers a feel for traveling to the moon.

In 1960, he did freelance film work in Chicago until he was hired as an associate director at NBC in Chicago in 1962. During that time, he also directed small theater groups, including the Old Town Players, where he met Jane Galloway. The couple were married in 1965.

Also in the mid-1960s, he was promoted to producer-director at NBC, a position he held when he was maced during street demonstrations outside the 1968 Democratic National Convention in Chicago.

His tenure with NBC likewise included a number of prime-time specials he produced and directed, including Royko at His Best, Dateline: Chicago, Sorting it Out and a series of Emmy Award-winning Sunday Night Specials. He left NBC for WTTW-Ch. 11 in 1975 to produce and direct the national pop music series Soundstage, as well as the public television child-development series, Look At Me.

“He was a consummate pro. As a director he never stopped trying to find something new,” said independent Chicago television producer Thea Flaum, creator of Siskel & Ebert and a frequent collaborator with Mr. Heitz since the mid-1970s. “He had a zest for trying to find new things to do, a new way to show things — he never got bored with it.”

After forming his own production company, he had created a number of business management and educational videos, returning to television work in 1996 with At the Auction, a program for antiques collectors he directed at HGTV. Beginning in 1999, he also directed HGTV’s The Appraisal Fair, and had worked in recent years on four public television pledge specials.

It was public television documentaries he most enjoyed, he told WGBH alumni.

“That caused me to become addicted to making television programs,” he wrote on the alumni Web site in 2000. “I have done that all my life. Now I have this enormous guilt. No one should be so happy with what they have chosen as their life’s work.”

“I’ll just continue to suffer in bemused but happy silence,” he concluded.

In addition to his wife, Mr. Heitz is survived by daughter Amie Richardson and three grandchildren.

Visitation for Mr. Heitz will be held Tuesday from 3 until 9 p.m. in the Peterson Funeral Home, 6938 W. North Ave. A funeral service will be held at 11 a.m. Wednesday in the United Lutheran Church, 409 Greenfield St., Oak Park