From Harvard Magazine and Trustee for a City: Ralph Lowell of Boston by Mark Gelfand (excerpts)

By the early 1960s, Ralph Lowell, founding father of WGBH-FM and TV, was widely hailed as “Mr. Boston” for his service as a trustee of almost every important charitable, civic, and cultural institution in his native city.

In 1973, Lowell was one of seven citizens officially recognized as “Grand Bostonians” for lives that “mirrored the spirit and dignity that have made [Boston] and its people so extraordinary.” The years of Lowell’s philanthropic and civic works paralleled significant transformations in the political, social, and cultural landscape of Boston, and his remarkable achievements reflect his key role in the making of a ‘New Boston’ during the mid-twentieth century. 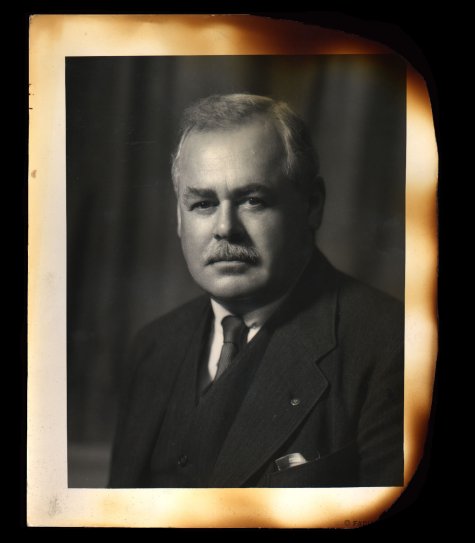 This photo from the WGBH Archives is almost undoubtedly by Fabian Bachrach of Boston.

A member of one of Massachusetts’ wealthiest and most powerful families, Lowell refused to fly, never learned to drive, and walked to many appointments. Those who had limited contact with him usually saw a stern individual who went straight to the point and bristled at long-windedness. Yet he could also be warm, understanding, and funny.

“I have lived my entire life in one area, I have been happily married for 45 years, and I have been in one business field,” observed Lowell in the fiftieth anniversary report of his 1912 Harvard class. “That is, I suppose, a picture of a ‘Proper Bostonian.'”

Asked to recommend someone who could be “a ‘Lowell’ for New York” and head the campaign for an educational television station there, he replied, “A Ralph Lowell could not exist in New York City because the pace is too fast.”

The above material is excerpted from the Harvard Magazine Ralph Lowell Vita, and the publisher’s notes for Trustee for a City: Ralph Lowell of Boston, by Mark Gelfand; Northeastern University Press, 1998.