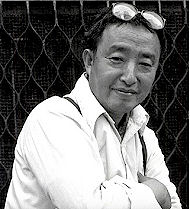 Nam June Paik, a leading figure in the artistic avant-garde for more than four decades, whose pioneering use of electronic imagery earned him the unofficial title “the George Washington of video art,” died Sunday [1/29/06] at his Miami apartment. He was 74.

Mr. Paik died of natural causes, according to his Web site, www.paikstudios.com. He had been left partially paralyzed by a stroke in 1996. “He basically invented video art,” said George Fifield, curator of new media at the DeCordova Museum, in a telephone interview yesterday. “He did installation. He did abstract video. He just did everything. He was amazing.”

A sculpture by Mr. Paik, “Requiem to the 20th Century,” which combines a 1936 Chrysler Air Stream sedan and Mozart Requiem, is in the collection of the DeCordova. Another of Mr. Paik’s works, “Robert Goddard,” a tribute to the pioneering rocket scientist, is on view at the Worcester Art Museum. 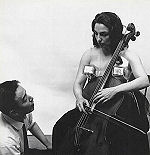 The Korean-born Mr. Paik (pronounced PAKE) had been credited with coining the term “information superhighway” and the saying “The future is now.” His career encompassed three continents and numerous art forms and helped define the aesthetic intersection of imagination and technology in the second half of the 20th century.

Mr. Paik began as a composer in the late 1950s, then played a prominent role in the artistic-theatrical events known as happenings, which flourished in the early 1960s. His exuberantly outrageous performance pieces included having a female cellist do a strip tease while playing Bach.

A few years later, he was one of the first artists to seize on the importance of television and video as a cultural phenomenon.

Mr. Paik began experimenting with television sets as a vehicle for art in 1963. His “Exposition of Music-Electronic Television” arrayed a dozen television sets in a Wiesbaden, Germany, gallery, juxtaposing the various images each was receiving.

I did not consider myself a visual artist,” he said in a 1975 New Yorker magazine profile. “But I knew there was something to be done in television and nobody else was doing it, so I said `Why not make it my job?’ ”

That job led to major exhibitions at such leading institutions as the Whitney Museum of American Art and the Guggenheim Museum in New York and the Kunsthalle Basel and Kunsthalle Zurich in Switzerland. 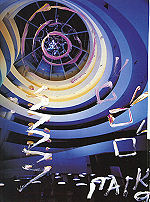 Mr. Paik exploited video in multiple ways. He used magnets and other devices to transform what appeared on video screens, creating striking and unexpected patterns of imagery.He also employed video screens as sculptural objects, as in his “TV Buddha,” from 1974, which consists of a Buddha figure watching itself on a closed-circuit video monitor, or “The more the better,” an installation of 1,003 televisions put in place at the Seoul Olympics in 1988.”Paik put the video image into a vast array of formal configurations,” wrote Guggenheim curator John Hanhardt, in the catalogue to the 2000 Guggenheim show, “The Worlds of Nam June Paik,” “and thus added an entirely new dimension to the form of sculpture and the parameters of installation art.” 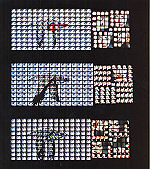 “He transformed the very instrumentality of the video medium through a process that expressed his deep insights into electronic technology and his understanding of how to reconceive television, to turn it `inside out’ and render something entirely new.”

Such a description may be daunting, yet a spirit of mischief and irreverence flourished in Mr. Paik’s art.”Paik had a terrific sense of humor,” Fred Barzyk said in a telephone interview yesterday. As director of the New Television Workship at WGBH in the late `60s, Barzyk hired Mr. Paik as an artist in residence.

Barzyk recalled that the furnishings in Mr. Paik’s Cambridge apartment largely consisted of used televisions. “His bed was a mattress stacked on a couple of old TV sets.”

With $10,000 from WGBH, Mr. Paik built the world’s first video synthesizer. The device could receive both audio and video input from multiple sources and produce an infinite number of manipulable color images. Mr. Paik used it for his contributions to a four-hour program called “Video Commune” in 1970.”

He and his engineer set it up and he broadcast the very first time with the video synthesizer,” Barzyk recalled. “It blew up `GBH’s antennae. Video art had arrived.”

Mr. Paik was born in Seoul on July 20, 1932. With his family, he fled to Japan during the Korean War. He earned a degree in aesthetics from the University of Tokyo in 1956, then moved to Germany to study philosophy. A longstanding interest in music led him to take up composition and performing. He associated with such experimental composers as Karlheinz Stockhausen, Gyorgy Ligeti, and John Cage. “He took my ideas into areas where I would never have gone,” an admiring Cage told The New Yorker in 1975. 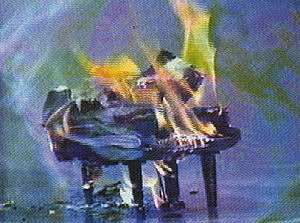 Around this time, a German music critic called Mr. Paik “the world’s most famous bad pianist.” But technical excellence was never Mr. Paik’s aim in music or art. He strove to provoke, amuse, and inNOVAte.”Art is just fraud,” Mr. Paik once said in an interview with a Korean newspaper. “You just have to do something nobody else has done before.”Mr. Paik leaves his wife, Japanese video artist Shigeko Kubota. A funeral will be held later this week in New York, according to his nephew, Ken Paik Hakuta.

Material from the Associated Press was used in this obituary.