Jean Shepherd died last week. The 70-something Florida resident is dead, gone, kaput. But all over the metropolitan area men and women are walking around with with bits and pieces of him clinging to them as cat hair clings to fabric. 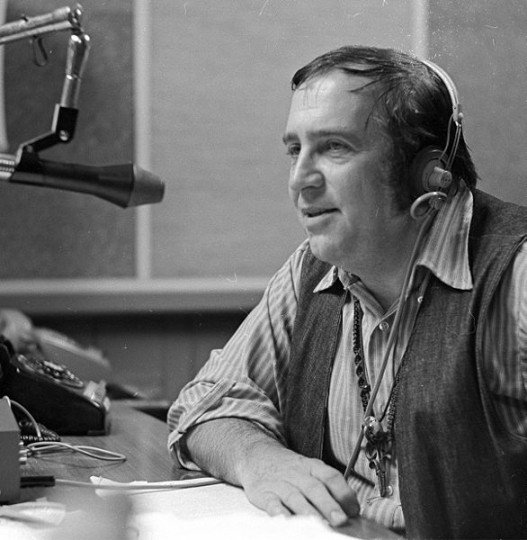 He was the Mr. Chips of New York radio, a teacher masquerading as an entertainer. The role playing was so successful that he attracted millions to his lectures, strange improvisations that started in the mid-1950s on an afternoon drive-time program on radio station WOR. It was appropriately called “Drive East.”

But as always to be the case with him, nothing was static. He was next heard doing one of the most remarkable all night stints in the history of talking out loud. He sat in a studio at the WOR transmitter in Carteret, NJ, and talked, and wherever that 50,000-watt signal excited speaker magnets, people found themselves looking toward the radio and listening to something new and alien. Inspired strings of words sprang from the speakers, and those bright strings embraced the night and held it captive often — far too often — until dawn crept in with the milk delivery trucks. (They were still around then.)

He spoke of ordinary things, remembered things: his mother at the kitchen sink in her rump-sprung chenille bathrobe; his brother, Randy, whining under the day bed; his father’s Blatz beer burp; the long afternoons of boyhood; the Indiana summer moving in like a 300-pound woman settling on a picnic bench.

He looked back on himself like a butterfly might dream of its chrysalis. He immersed his listeners in time and place and the awareness of what it was to be alive. In the meanest of terms he taught what Socrates meant when he said, “The life which is unexamined is not worth living.” He examined his life, and his listeners laughed and grew light and took wing even as they learned terribly hard lessons about the importance of the ordinary, about the efficacy of wonder.

He increased the world’s stock of whimsy, and he taught joy to the Silent Generation, the one that came of age in the time of Sen. Joseph McCarthy, whose monotone mantra — in “Mr. Chairman, point of order, point of order, Mr. Chairman” — still lingers in the basements of the mind. In counterpoint, Shepherd dismissed things official with the catchword, often spoken, never truly meant: “Excelsior!”

He would explain it meant onward and upward, and he found the very idea funny, for in his view events and people were constantly tripping and falling, exposing — on the trip to the hospital — dirty underwear. It was Shepherd’s thesis that the greatest fear of the list-compiling, credential-checking world was of being found out, having shallow roots exposed, holding office naked without epaulets or company credit card. To that end, he proposed once to befuddle the list makers by having their listeners visit book stores and ask for a nonexistent book, “I Libertine,” by Frederic R. Ewing, an expert on “18th Century erotica.”

He later capitalized on the small stir the hoax created created by selling the idea of publishing it to Ballantine Books. He then proceeded to write it (with science fiction writer Theodore Stuergeon) and promote it on his nightly broadcasts. It came out in 1956, and a first edition now lists at $487.

He wrote other books alone; he wrote many articles in many magazines, including Playboy and Mad magazine. He made personal appearances and packed Carnegie Hall. He did a TV series for public television. He wrote and narrated A Christmas Story, which was to become a holiday staple. He made records. Much of this work was done after his radio days. He thought he was moving onward and upward. But sadly, for him, the excelsior process was tinged with irony. He never surpassed the genius of his radio days.

Those distant magic nights are intact in the minds of his audience, his “night people.” They know he lives to heckle them as they grow fat and gray and comfortable among their credit cards and epaulets and credentials.