Dr. George P. Tuttle produced many WGBH productions in the late 1960’s-1970’s after his tenure as Professor of Theatre and director at Dartmouth College. Paul Binder was the floor manager (and former Dartmouth student) of George’s for a show about History filmed in the basement of the Museum of Science.

My own connection to WGBH was that I was on the 2013-2014 season of “This Old House” working alongside Tom Silva, Deb Hood, Kevin O’Connor et al. 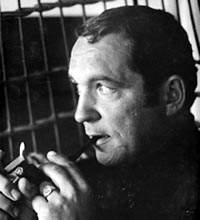 Cape Cod Community College theater and communications professor George Tuttle could have been described by Shakespeare’s, “All the world’s a stage, and all the men and women merely players.” Only in Tuttle’s case, forget the “merely.”

Friend and colleague Lore Loftfield Bower said there was nothing “merely” about Tuttle, who died Monday at his home in St. Johns, in the Virgin Islands at the age of 68.

He was larger than life.

“There was no gesture too theatrical for George,” said Loftfield Bower, chairwoman of the college’s language and literature department.

“George was very aware of constantly creating who he was,” she said.

A Shakespearean scholar and a professor at the college from 1970 to 1996, Tuttle certainly didn’t fit the profile of most academics. He lived on a 4.5 acre estate on Lake Wequaquet, where he was known to land his sea plane.

After his retirement party — which Loftfield Bower said he hosted himself because he wanted to make sure it was good — he and his wife of 47 years, Anne, departed for France. Waiting for them was a 90-foot steel-hulled canal barge, once used to transport grain. They had it converted into a luxury BB barge, with three suites, a salon with a Franklin stove, Persian carpets, wood floors, Belgium lace curtains and fine art.

The deck carried a London taxi cab, which the Tuttles drove off a ramp and then used to tour Europe, said his son, Chuck Tuttle of Centerville.

“Every day was like a holiday with them,” said Christine Tuttle, who recalls the larger-than-life impression her father-in-law made on the island residents.

“He saw things that people couldn’t see. He had dreams others would say couldn’t happen. But he had a very analytical mind. His dreams became a reality,” she said.

He had impeccable taste and wanted only the best for himself and his family.

“He was demanding person,” Loftfield Bower said. “He once canceled a stage production because he didn’t think it was ready to go on stage.”

Born at a Park Avenue address, Tuttle’s parents moved to Scarsdale and then to Amherst, where they lived at Fort Hill Farm, which supplied meat and dairy products to Amherst College during World War II.

“It was a farm with a butler,” said his daughter-in-law.

He attended the Eaglebrook School, Deerfield Academy, Middlebury College, Yale University, and Tufts University. He served as professor of theater at Dartmouth College and was a producer and a director at WGBH.

On the Cape, he worked as the director of the summer arts program at the Cape Playhouse School Theater, and was one of the original organizers of the Pops by the Sea summer concert. He directed the Janus Players at Cape Cod Community College.

Tuttle was also owner of Tuttle Travel Services for more than 20 years in Hyannis and Osterville.

He made the most of life, said Christine Tuttle. As a member of the ski team at Middlebury College, he would ski to Robert Frost’s home, and clean the man’s house in order to spend an afternoon with the poet.

Tuttle was open-minded and respectful of people of all backgrounds, Christine Tuttle said.

“Dad was an entrepreneur and an adventurer, a gourmet, and a very educated Everyman, who loved people for who they were not what they were,” said his son, Chuck.