Law Enforcement and Criminal Justice (LECJ) was a series funded by the US Department of Justice for in-service training of police officers in the New England area.

James Patrick Kelly [the host] was one of the most colorful people to ever be employed by WGBH. Policemen, as a group, are some of the best storytellers in the world and Jim was one of the best of the best. He spoke out of experience and he framed his stories with humor and understanding of human frailty of which he had seen a lot. 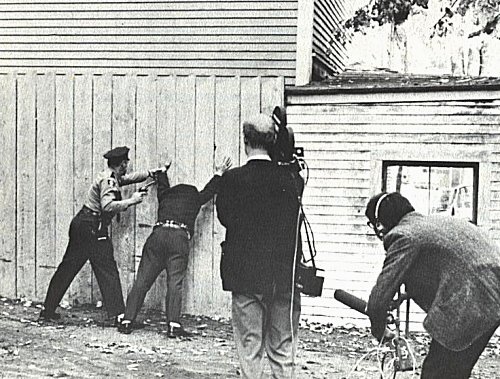 Filming of a scene for the series. The WGBH "shooter" is Peter Hoving.

A former New York City policeman and a longtime investigator for powerful House and Senate Committees, he had experiences quite unlike any other executive producers at WGBH had. He had worked directly for Bobby Kennedy and had been deeply involved with the Kennedy vendetta against Teamster president, Jimmy Hoffa.

In his office, he had a photograph of a group of men — I think they were a baseball team — seated outside wearing dull gray uniforms. It was taken at a Federal prison, Allentown, perhaps, and there in the center of the front row was Jimmy Hoffa. I had the impression that Jim enjoyed the fact that his undercover work had helped to put [Hoffa] there. 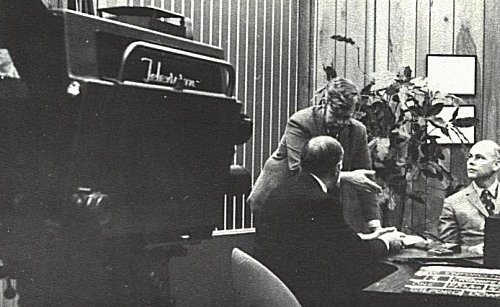 Ralph Salerno, Peter Downey and James Kelly. Each program (there were 19 one hour episodes) had a studio discussion segment.

Particularly outstanding were two programs on Organized Crime. The guest presenter was Ralph Salerno, national expert on the Mafia. WGBH was broadcasting information about capos and button men not long after law enforcement officials learned how the crime families were organized.

This was before Mario Puzo had published The Godfather, and this information was just not available to the public anywhere else at this time.

Jim inspired great personal loyalty among the people who worked for him and that included myself; Grace Papps who was the associate producer and assistant to Jim; Marie Foskett, a volunteer who seemed to put in more hours than some of the full time employees; and Margo Child, production assistant.

Writing this reminded me of what happened at one of the studio tapings. The heads of several police departments were there in the studio before the show and were gathered around Jim Kelly talking animatedly while I did those last-minute things producers are supposed to do which as I remember consisted mostly of worrying about something that might go wrong.

Grace had taken to calling me “Chief” which I rather enjoyed, but on this particular occasion, in the studio, when she wanted to get my attention, she called out, “Hey, Chief” — about a third of the men in the room, most of them in uniform and gold braid, turned around. 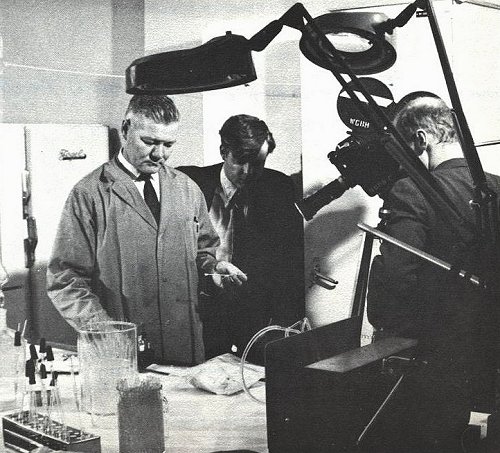 We got to shoot inside the FBI Lab in Washington. Peter Downey, series director, supervises a close up with Peter Hoving.

[Jim] always seemed to know more about what was going on in Washington than you could read in the papers. One day during a trip there with him, we were having lunch at The Monocle restaurant and “The Director” came in. Everyone in Washington knew “The Director” was J. Edgar Hoover. He went to his table to have lunch with his friend, Mr. Tolson but he spotted Jim and gave him a wave and a smile that made me think he knew him.

That’s why when the Democratic Headquarters in the Watergate Building were burglarized, I wanted to know what Jim thought, if he had any particular information that was not public. Jim, a partisan Democrat, was under no illusions about his party. He said that the break-in was connected to much larger misdeeds by the Administration but that the Democrats did not have the stomach or the skill to go after the facts effectively so Nixon would be safe.

Thoughts of Jim are now crowding my head. His best stories were about undercover work, not so much his own but working with informants. He had done a lot of that as an investigative reporter for CBS News back when they were doing real investigations about crimes and people went to jail as a result. 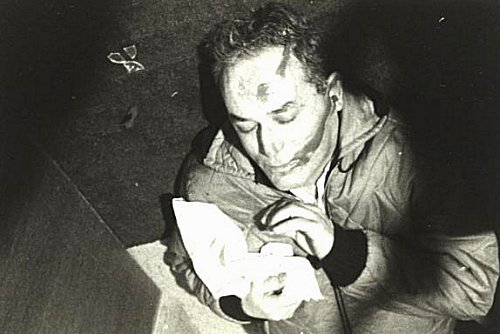 This "victim" appeared in a dramatic scene.

There was one time that the undercover camera van pulled out, too fast, into traffic. Jim and the cameraman hit the back door of the truck and fell out onto a Manhattan Street directly in front of the car they were shooting. Two prominent members from a NY crime family looked over the hood and saw two men, a tripod with an Arriflex mounted on it, and figured this was not good news. It pretty much shut down that investigation.

Jim told the story, not with anger, but with a real appreciation for the absurdity of the situation.